By Richard ListerAugust 22, 2013
I’ve always thought of musk oxen as rare and fantastical beasts, not disimilar to those ridden on the ice planet of Hoth in one of the Star Wars movies.  Tom tells me it is Episode Four, A New Hope. We saw one in the Polar Zoo back when we were In The Arctic and they appear to be animals leftover from the seventies with the long hair and shaggy fur coats. Having outlasted woolly mammoths and giant deer, they finally went extinct in Europe but were re-introduced in Norway in the last century and there are now 3-400 in the Dovrefjell National Park.
Just up the road from our campsite was the Snøhetta musk ox viewing point, which looks down over the tundra-like landscape. Getting there is a 1.5 K walk along a “wheelchair accessible” path; accessible that is for wheelchair users able to navigate a one in four slope. No problem if you are Norwegian obviously… 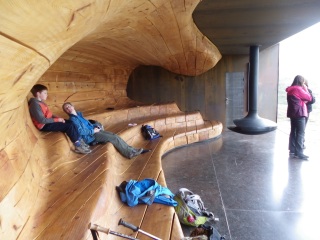 It is a beautiful building. Inside is a  wall of wood which looks as if it has been carved by a river and forms three tiers of seats. The facing wall is glass and mirrored on the outside so any approaching musk ox only sees a reflection of the mountains. 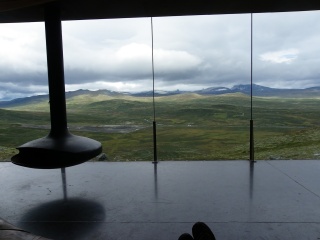 There was a naturalist there who had trained his telescope on a couple of musk ox but even through his ‘scope they were little specs, almost impossible to see. The building though was absolutely lovely and it was worth the walk on its own.

We drove on to  Køngsvoll where there is a trail into the park from where you have the best chance in Europe of seeing a musk ox.

I detected a certain weariness from two of the three members of our party. Having done one musk ox walk without any real result they were not exactly giddy with enthusiasm about the prospect of setting out once again across the chilly moorland. But we did, scanning everything around us as we walked and within ninety minutes we had seen literally dozens of musk ox-shaped rocks. The wind was really blowing now. Tom had retreated somewhere in his imagination while Philippa had gone from looking slightly crestfallen, to increasingly irritated, like someone who has just realised they’ve been conned.

I found a large rock in the lee of the wind and we all put on extra layers of clothing and sat on the mossy ground to eat the big sandwiches which Philippa made before we set out.  I scanned the surroundings with extra concentration, knowing this was liable to be my last chance. After ten minutes or so I noticed some grey/brown lumps off in the distance and focussed the binoculars on them. Sure enough one of the lumps  was moving. There were three musk ox ambling around at the edge of a stream bed. This fired us all up again and we walked a little further to try to see them more clearly. And they vanished. We spent another ten minutes trying to see them before walking back to our original rock and as we did so they started moving too. They were almost too small to see with the naked eye, but clear as a bell through the binoculars as they edged a little closer. We saw five, walking in a line across the tundra, a big bull at the front and another at the back. Watching them, we felt like early explorers out in the wilderness.

OK, mission accomplished. We were back in Thor an hour later, and on the road to Dombås through a wide glacial valley with green fields either side of the river running through it. After refuelling in Dombås we left the main highway to head north west to Andalsnes through big, forbidding mountains crowing beside the road and erupting with enormous waterfalls. It was now raining hard and the mountain tops were hidden by cloud, but we have stopped at a campsite right in their midst and are hoping for at least a glimpse of these giants tomorrow.