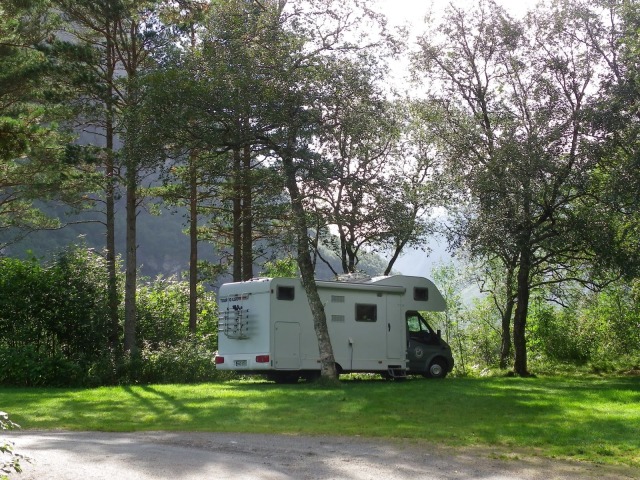 We found ourselves in the backdrop for a movie like “Seven Brides for Seven Brothers” this morning. Vast grey mountains steaming in the hot sunshine, clouds burning off to reveal snowy peaks way, way up. Yesterday we couldn’t see any of this, but today it was a different place: welcome to Epic Norway! In fact the scenery has been epic all day with everything supersized and magnificent. 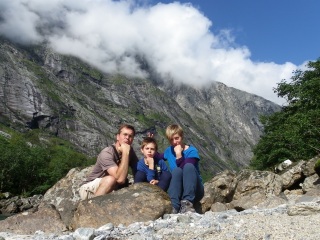 It was so nice to wake up to blue skies this morning, with Thor nestled quietly in the trees. We had porridge with lingonberry jam and then walked through the woods and down to the river, churning its way through mossy boulders. We found a quiet beach further up and messed about in the sunshine. Before we knew it it was midday and we headed back to the campsite to set out for Trollstigen. 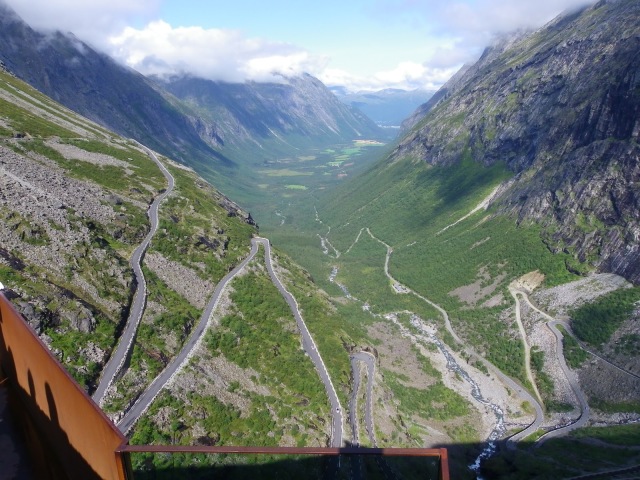 The Trollstigen road negotiates eleven hairpins, climbing almost nine hundred meters up a sheer cliff, with barriers at the edge less than a foot high.  I remember it from a family holiday in Norway as a child when my sister and I basically hid in the back seat until it was over. I didn’t really look over the edge this time either, as I was too busy watching for tour buses coming down the other way. In fact though there was hardly anyone on the road. Tom was sitting next to me for this part of the journey. You will recall that Tom is utterly fearless when it comes to heights of any variety. This time though was different. 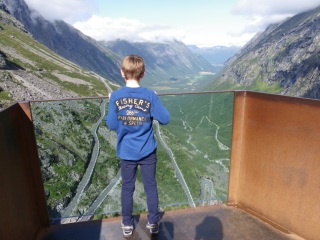 Our usually talkative child was very, very quiet – even somewhat ashen-faced – as we turned into each death-defying corner and the ground fell further and further away.  The view down the valley was stupendous but I’m not sure that he really registered it.

At the top they have built a brand new visitor’s centre, all suspended walkways and reflecting pools and rather a nice cafe, where we celebrated our victory over gravity with some delicious fish soup and some equally delicious meatballs. We ate outside in what was a crisp wind and the young lads who brought us our food clearly thought we were mad but they were so friendly and helpful, dashing back inside for bread and cutlery for us. Its a terrific visitors centre – as they all have been actually. One note for tourists though… enough with the cairns already!! They are bloomin’ everywhere! You can’t turn a corner at the top of Trollstigen without being confronted by another tiny pile of stones that someone felt would somehow improve the view, or be some kind of lasting memorial to their presence. Really, it doesn’t do either of those things – its just graffiti with rocks. Stop doing it!

The road over the high mountain plateau and back down through the valley is one of Norway’s most celebrated. It feels like some kind of Eden with lush green fields and glittering tarns and these great lumbering mountains leaping off in all directions.

At last it deposited us at the ferry terminal at Norddalsfjord, where the sign said the next one would be at 9.30 tomorrow morning. Hmm. That rather did for our plan to spend the night in Geirangerfjord, until that is Philippa consulted the Info centre and discovered that the ferry we needed to get, left from a different point 3k down the road. We stopped for a cup of tea anyway watching little boats chug off into the fjord, sending silver ripples in the sunshine. 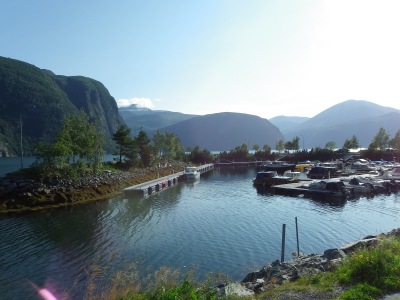 We got the right ferry at Linge and continued the spectacular drive as the sun began to sink behind the mountains. Looking at the view unfold Philippa said how uplifting this sort of scenery is – its just good for the soul to be reminded what beauty looks like from time to time. 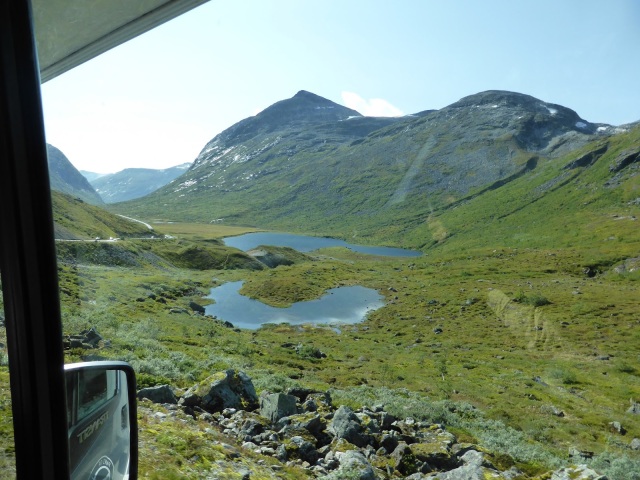 Eventually we rounded the mountain that looks down on Geraingerfjord and we could see the magical sliver of fjord surrounded by massive cliffs with the little settlement at the end of it. There was a huge cruise ship parked there too.

We are parked in a grassy campsite with our side window angled so that we have a view down the fjord. The cruise ship pulled slowly out at sunset and all is dark outside, and peaceful but for the thunder of waterfalls off inthe distance.
Tomorrow, if its fine, we’ll try to get dropped off partway down the fjord for a long hike back. We were really so lucky to get to see this bit of classic Norway on such a lovely day – it was like driving through a brochure.