By Richard ListerAugust 17, 2013
Against my expectations all was quiet in the big car park last night and it wasn’t until seven o’clock or so that people started driving off to meet the various ferries that sail from Moskenes; down to the southernmost Lofoten islands of Værøy and Røst and back to Bodø on the mainland. 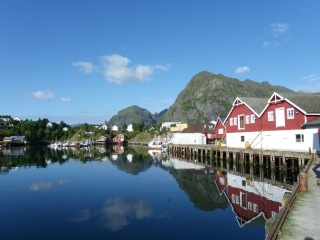 Our guide book talked temptingly of “Lofoten’s best bakery” in the next village along, but there was no sign of it, so we drove to a high overlook for breakfast, with the side window angled towards the mountains rippling down the coast in brilliant sunshine.

Moskenes has a ferry terminal and  a cafe and some sort of fish processing facility and that’s about it. The ferry – smaller than we had expected –  grumbled and juddered its way in to the dock, nose already lifted. About four cars drove out and a load more of us drove on. The holiday season in the Lofotens is definitely coming to an end. 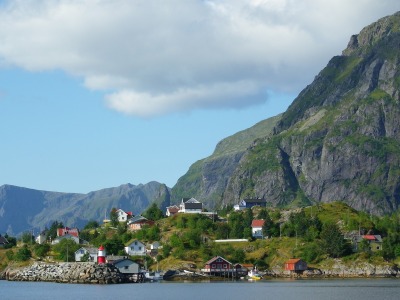 The view back from the ship is one of the few places where you can see what feels like the whole spine of Lofoten’s mountains, stretched out like the armour plating on some kind of vast submerged dinosaur. We could see them for virtually the entire three and a half hour trip. The water was smooth and calm and it was gratifying to see that the mountains on the mainland we were heading towards were every bit as impressive as the ones we were leaving behind. 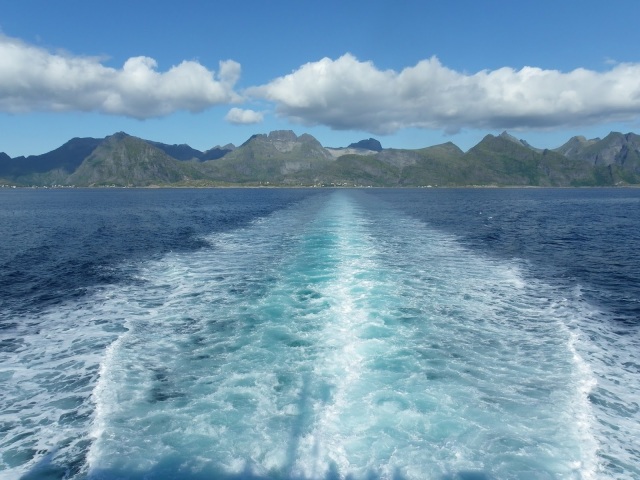 After more than two weeks in the wilderness, Bodø was a bit of a shock with traffic congestion and a busy shopping district, and the usual bain of city travel in a campervan –  nowhere to park. When we finally got into the tourist info place though, the lady at reception had exactly the pamphlet we needed about the next few days travel, complete with ferry timetables and details about things to do en route.

Two of those things were a twelfth century church nearby which apparently has some amazing paintings, but was closed when we got there; and Norway’s best indoor water park and spa , which was very much open. Once we’d been given our wrist bands P got a gleam in her eye and with a quick “Meet you later” over her shoulder she scuttled off to the spa facility.  T and I shot down water slides and jumped off the high dive boards instead. I say “we” jumped off high dive boards but actually that was Tom, straight up to the ten meter board and off with a squeal and a big splash, many many times. I went up there once, looked over the edge and knew that I would break on impact if I jumped off. Needless to say, T was deeply scornful and I feel that some sort of milestone has been passed, either by him or me…
After a quick stop in the supermarket across the road we drove off in the late afternoon sunshine. It was strange to be in suburbs, having barely been in urbs up until now. We are still a long way north, but it doesn’t feel particularly “out there” in the way it did in the Lofotens.
A little way down the coast is the island of Saltstrauman, famous for having the strongest tidal maelstrom in the world which we will go and stare at eventually.  It also has a quiet little campsite with wifi so I got busy putting photos on the blog, P downloaded some news and T sent some emails. As you do when you are ten.
He also spent half an hour on a pedal car around the campsite – and beyond as it turned out. He came back past Thor saying excitedly that “The guy on the motorbike gave me a thumbs-up when I moved over for him!”. He hadn’t quite hit the main road but still, it seems that he has inherited the wanderlust.
We’d bought Lofoten fish burgers for supper, and while they have a slightly strange, almost rubbery constituency, they are also really tasty. We sat outside in dazzling sunlight with plates on our knees.