By Richard ListerAugust 15, 2013
I feel sad just writing that because this really is one of the loveliest spots on earth and it has been a glorious few days. We had planned on getting up and at ’em this morning, but we pulled up the blinds and saw another lovely day in prospect and decided to take it easy instead. Having said that, P did do several loads of washing, while T made us scrambled eggs, and I ground coffee.  Its something I do every day and we now have a large sackful that I plan to sell to tourists. There was a fair amount of running up and down on the beach and then sitting in camp chairs reading with cups of coffee while Tom edited his video about our trip (20 mins so far) and all in all it was a lovely relaxed start to the day.
At lunchtime we filled Thor’s reservoir with fresh water and said goodbye to the charming campground host who asked us to write up Skagen Camping in TripAdvisor (which we certainly will). Then back around the fjord, turning off on the white road to Nusfjord. All these little fishing villages are worth a stop, but so many people stop in Nusfjord that it has started charging people to enter. That was enough to make P and I think twice about whether we wanted to go, fearing that it might be some sort of theme park experience when we got there. But reasoning that it is getting late in the season and maybe wouldn’t be too crowded, we joined a small procession of campervans and dipped and wove down the tiny dead-end road.

Nusfjord really is the quintessential Norwegian fishing village; a tight cluster of red and yellow wood-framed houses perched at the rocky mouth of a natural inlet. They’ve actually handled the tourist problem very sensibly. There are a couple of not overlarge car-parks set aside for visitors and they charge any adult who wants to enter the village NOK50 (about a fiver in the old money). That gives you a guidebook to the various buildings which have been set aside as part of a living museum. There’s a slideshow in one shed which shows the various stages of the fishing season: it runs over the winter when vast numbers of cod gather off the Lofoten islands. 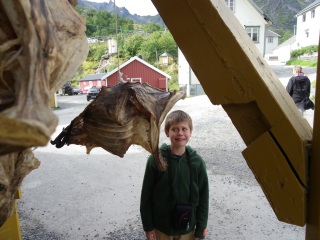 The catch is brought in and dried over the racks we have seen pretty much everywhere. That process turns them into “Stockfish”, most of which are exported to the Mediterranean where they are the essential component of Bacaloa. The heads are exported to Nigeria where they are prized in a particular kind of hot stew. The smell in these villages during the drying season is probably not for the pescaphobe…

The Red House is the oldest building, built some time before 1870, and was used as a boat shed. Its still full of nets and floats and one of the old boats. In the old black and white photos from Nusfjord’s glory days there were dozens of boast all tied up in the harbour and they are astonishingly similar to old viking ships; low beamed and wide, with tall curving prows.

The old sawmill was as it was when safety inspectors shut it down in the 1970s, horrified at its exposed sawblades.

After a bit of a stroll, a fish restaurant turned on its tourist magnet and we were sucked in, much against our will. P and I had Lofoten-caught fish sandwiches, though how you catch a sandwich has yet to be explained to me.  T went old school with the fish and chips option. All the chips came wrapped in cones of what looked like photocopied editions of the Daily Telegraph. It was nice to think that in some small way, our nation had contributed.  Gosh it was good fish though it ain’t cheap to eat out in Norway. What was essentially cod and chips three times cost approaching fifty quid. Some experiences though you just have to pay for.

And that’s what we did next too. There were aluminium hulled boats with fast outboards for rent (for less than the cost of lunch) and despite a mixed sky it was too good to miss. I do like the laissez faire Norwegian approach to letting people enjoy themselves:
“Can you handle a boat?”
“Um yes, a bit, mostly”
“Ok here are the keys. See you later”
Once I had worked out how to start it up, we untied it from the dock and pottered out of the harbour towards the open sea. Then I gave it a bit more throttle and soon we were bouncing into the waves, throwing spray either side of us. Tom of course immediately wanted to drive so we swapped seats and he was completely and utterly thrilled, pushing the throttle open as far as he dared. We cruised up the coast and then turned back, past the entrance to Nusfjord and down to the next – even smaller – village with its own tiny harbour. Philippa and Tom were taking it in turns to drive, with the other one sitting in the bow as the nose bounced off the swell. It was great fun and lovely too to see Nusfjord the way the fisherman do – a cosy little haven from the grey sea. All too soon we were nosing back into the harbour again, tying off and handing back the keys.
We went up to the old General Store, part of which they have kept as it was, complete with many period items including about twenty different kinds of chewing tobacco in faded tins. We had modern ice-creams in celebration of our nautical prowess.We’d tried to get one earlier from another place and were told that they had stopped selling them because it was too late in the season for ice-creams. Its August the 14th (!) but different lattitudes, different rules, and it has to be said that it can be on the chilly side when the sun isn’t out. That said, we are still north of the Arctic Circle…

By the time we got back to Thor, we were virtually the only people around, though a few had arrived to be checked into the rorbuer fisherman’s huts which have been converted into places to stay for tourists. In the 1930s an estimated thirty thousand fishermen lived in rorbuer when they travelled to fishing ports for the cod season, and they fell out of favour only when modern fishing boats became comfortable enough for crews to live on board. Archeologists have apparently unearthed the remains of one fisherman’s hut dating from around 700AD from which they concluded that they have been processing Stockfish in Nusfjord since the viking era. 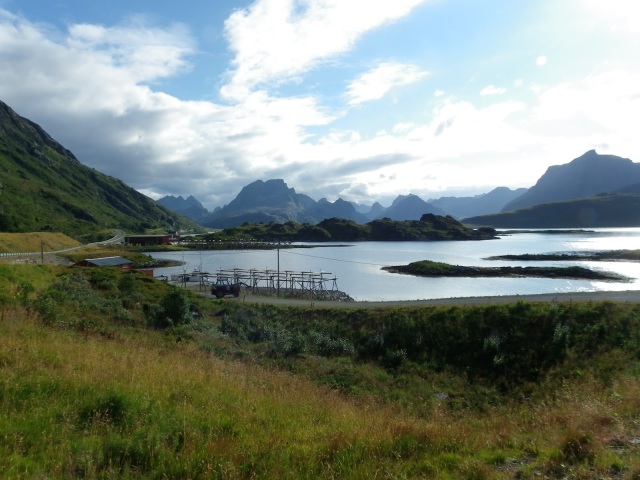 Back in Thor we drove through the last of the fishing villages that are linked by the E10, which runs down the spine of the Lofotens. Rarely is a road blessed with such landscapes. The villages here in the south are bigger and closer together, sometimes filling their own miniscule islands. The road hops from one to the next, before running out where we are now, in the compactly named “Å”.
Its another free camp – partly because we want to be in striking distance for tomorrow’s ferry and there is con campground closer, and partly because it seems to be the thing to do. The loop road at the end of the E10 is partly a car park and it is half full of campervans, waiting, we assume for the same ferry. I’m very glad we booked. Tomorrow we drive back to Moskenes and then on to Bodø on a four hour crossing which “can be rough” says the book. It will be rough leaving the Lofotens whatever the weather.