By Richard ListerAugust 17, 2013
It was actually hot this morning. We’ve had warm sunshine before , but usually with a cool wind to take the edge off it. Today the wind was blowy and warm and the occupants of the campervans around us brought out folding chairs and were soaking up the sun. Many of the people on the road now seem to be retired couples and as they sat out they chatted back and forth across the gravel like neighbours do. It made for a peaceful, friendly atmosphere.

The maelstrom (which seems like a word only ever used in Victorian novels) is at its most active at high tide by all accounts, so we donned frock coats and hooped dresses and walked beneath the soaring road bridge to see it in action.

The turbulence is created because the tide has to move through a narrow channel which connects two fjords. Four hundred million tonnes of water rushes through an opening one hundred and fifty meters wide and creates whirlpools up to five meters deep and ten meters wide. I can’t say that they were as big as that when we saw them but no-one was anxious to go swimming. 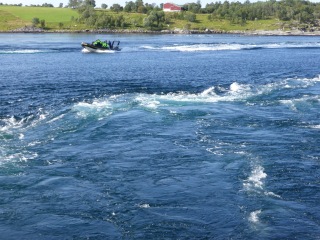 The water boils and surges and appears to go down a whirling plughole. Its impressive and a number of tourist boats came up to the edge of the action, their engines battling to hold them in postion.

We could have stayed in this neat little campsite for days but there are so many more things to see so we pulled back out onto highway 17 – the Kystriksveien coastal route – which hugs the shoreline for almost seven hundred kilometers. My vocabulary for magnificent mountain splendour is beginning to run low, suffice to say that there was a lot of it. T didn’t see a great deal as he was practicing a maths exam in the back. Yes, we really are that mean. When his brain was full though we stopped at a little beach for a cuppa and a chance to wiggle our toes in the sand. I could have fallen asleep it was so warm and quiet. Tom paddled and Philippa brought us tea and melon slices.

At Sætvik, across the fjord, we saw the ragged grey edges of the Svartisan glacier overflowing the mountains like dusty frosting. We’ve been in its shadow ever since and driven under it too, through a gloomy seven kilometer tunnel that pushed damp and earthy-smelling cold air through Thor’s ducts and gave me and P a shiver up the spine. The lights in the roof vanished so far off into the distance that we never seemed to get any closer to the end of the tunnel, just endlessly passing the reflective edge markers without, it seemed, ever moving forward until all of a sudden we rounded a corner and emerged blinking into the sunlight.

A little further on is the Holand information centre, and next to it, down a steep single track road is the small jetty from where the ferry goes across the fjord to the glacier. The small parking lot is virtually empty and looks over the water to the frozen blue icefield beyond. Its so pretty and quiet that we have decided to stay here for the night and catch the ferry tomorrow.

Sent from my iPad