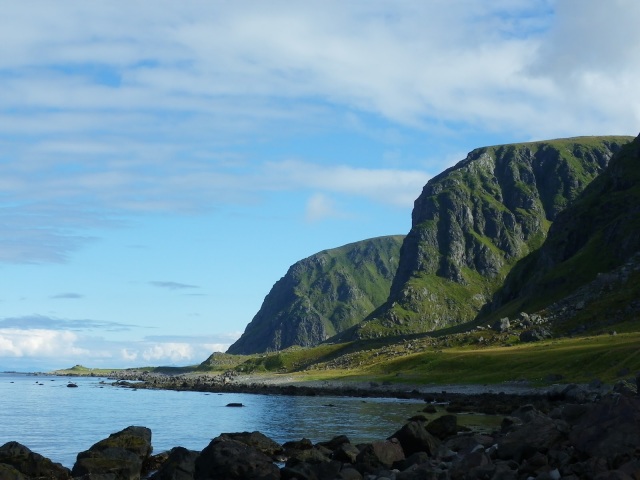 The hike from Eggum to Unstad is, says the Rough Guide, “a popular nine-kilometer trail with mountains and lakes on one side and the surging ocean on the other”. And it certainly is all of that, but we hadn’t expected to be navigating pathless sections of sheer wet cliffs or clambering up slopes so steep that they involved chains. But to begin at the beginning…

All was quiet last night apart from a visitation by tonkeling sheep at some point in the small hours and we woke to a clearing sky and the promise of sunshine. It was perfect weather for walking and we struck out on the path below the cliffs with lunches and wet weather gear and water and all the rest of it, expecting a fairly flat stroll to the next little village.

After half an hour or so we spotted an unusual shape amongst some rocks above the path ahead of us. It was two eagles perched close to one another, scanning the sea. Even from a distance they looked huge and they let us get a bit closer before flapping off down the shoreline – while being screamed at by the birds nesting in the cliffs.

There were apparently a number of fishing villages along this coast which were gradually abandoned in the nineteen fifties. We kept looking for remnants of them and the beach was strewn with  numerous fishing floats and big bits of timber as well some hefty pieces of rusted  iron from long vanished heavy machinery but we didn’t see any signs of habitation. There were only one or two other walkers around and we all “hey hey”ed as we passed. 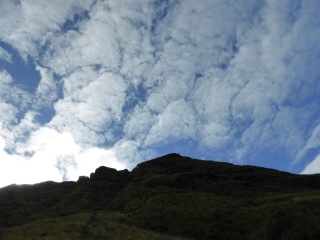 The sun was rising just over the top of the cliffs now and we could see a lighthouse on the promontory ahead. And here we came to our first test; a rocky inlet with steep cliff walls and no apparent path through. Luckily some previous walkers had set up some cairns and woodent planks to indicate the way but it was like negotiating the aftermath of a rockslide as we hopped over and through huge boulders, before climbing a shallower bit of the cliff and then finding a way around the slick and waterlogged path that glistened threateningly on the edge of a crumbling precipice.

From there the path went steeply upwards and became even narrower, and as long as we didn’t look down, the view was stunning. Tom of course had no worries whatsoever about the sheer drops and the slippery stones and unreliable path RIGHT AT THE VERY EDGE OF THE CLIFF. He went into major eye-rolling mode as we kept telling him to BE REALLY CAREFUL TOM, and continued skipping and telling jokes as P and I clung grimly onto clumps of grass and passing sheep.

At the lighthouse we stopped for a breather and began pondering whether going any further forward was wise, given that we had to walk back that way too. I think the word Philippa used was “pointless”, and I was not relishing the prospect of the next bit of the path which was so sheer and so steep that they had provided chains set into the hillside to hang onto. There was though, a feeling (probably eminating mostly from me) that we should at least try to see the village we were aiming for, if only that honour could be in some way satisfied before turning back.

So hand-over-hand we edged towards  what looked like a viewpoint, fully expecting that to be our turning point, but when we got there, the view was breathtaking; a wide, blue inlet with a silver beach at the end of it, and beyond that vivid green fields and a cluster of red houses all framed by a curve of mountains.

It was Unstad and too good to miss. We walked down with jelly legs and sat on a large rock on the beach for our sandwiches. The prospect of doing it all again was a wearying one but once we had all eaten and been warmed to the bone by the sunshine, we set off back on the trail. There was one astonishing moment as we were walking when suddenly the ground shook and the air roared and a couple of military transport planes flew by at the same height we were and no more than two hundred meters away. It was so unexpected it was momentarily terrifying. Then it was on through  chains, lighthouse, ARRGGHHHREALLYREALLYSTEEP, cliffs, boulders, beach, path and before we knew it we were back at Thor, drinking tea in the sunshine. It was a very hard 18k but oh so worth it.

Eventually we drove off in the sunshine through Eggum and back to the main road; past the Viking Ship museum which really did exist of course and looked rather special but it was now 6.30 and time to find a place for the night. At Leknes we followed the sign for Sentrum and cruised down a new looking commercial strip, before stopping at a big American style pizza place. We felt we had earned it and the overworked waitress (“its my second day”) was, as everyone here is, friendly and anxious to please.

The crossing to Flakstadøya island is via a tunnel that plunges down so sharply, you feel like you are heading to the centre of the earth. Then it climbs like a rollercoaster, steep enough that I had to change down to fourth gear (from sixth) to be able to keep moving. The books wax lyrical about these southernmost islands, and while the rest of the chain is not exactly Slough on a wet Tuesday, the scenery here does seem to shift up a gear.

The extraordinary thing about these mountains is that they are at the end of people’s gardens. Usually to see peaks like this you have to leave the human race behind and drive through complete wilderness for a while as they build up. Here, there are people farming and working in supermarkets and living their ordinary lives with these extraordinary, soaring, pointy-topped monoliths erupting from the earth right next to them.

We had toyed with the idea of another free-camping spot, but as we drove, it was clear that there are a few more houses and fewer little roads off the main E10 to explore, so we headed for the only campsite on the map. The route was extraordinarily beautiful. The mountains edge right up to the water with only just enough room for a road and a smattering of houses. The road curls back on itself around a fjord, bullyed by the mountains all the way.

We found the campsite on the map and saw from a distance that it was a depressing rack of campers all slotted next to each other. Further back down the road though is a smashing campsite spread over grassy dunes down to the sea. We found a site and are watching the sunset with something warming in a glass, feeling pleasantly weary. 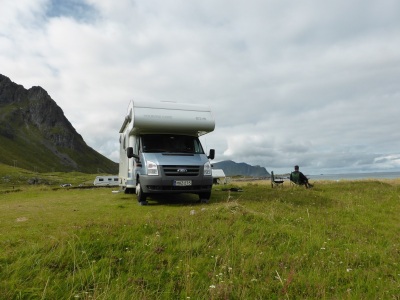