By Richard ListerAugust 8, 2013
The sky was clearing as we got up this morning. There were patchwork panels of blue in the sky and shafts of sunlight between the clouds.  We were in good spirits after a quiet night, and long hot showers in the warm and spotless bathrooms in which we were the only inhabitants. Tom made us superb scrambled eggs and I ground fresh coffee  (lovely beans Tim!) . So all in all we were feeling pretty upbeat as we pulled out of the farmyard and onto the road for Senja. Then it began to rain. Really quite a lot.

We stopped at a supermarket in Sørreisa which had a fish van outside it and bought some white fillets of er, fish, before heading on to Finnsnes where the guidebook assured us there was a tourist information place. There was a roadsign backing that up so we were really pretty confident of its existance. But I’ll say this about roadsigns in Sweden and Norway: quite often they tend to be for people who already know where they are going – a confirmation that you have arrived at the place rather than, say directions to actually get there. To be fair, there may be a sign to tell you that your destination is in the next town, but the next may not appear until the entrance to the place you are looking for. How you get between those two signs is entirely up to you. So it was with the Sculpture Park in Umea and again with the tourist office in Finnsnes. A few K from the town there was a sign for it, and then… nothing. We cruised throught the town three times but never saw it marked anywhere. So we crossed the tall bridge to the island of Senja, which is the second largest in Norway and promises to be spectacular. It was also supposed to have a tourist office in the first town across the bridge. Maybe it does but no-one we asked seemed to know about it and the rain seemed to have set in for the duration which rulled out any chances of the long walk P and I have been craving. So, to a campsite with wifi and a long afternoon with cups of tea and snacks and reading and puzzles and the chance to put loads of photos on the blog.

It was really rather nice actually, and as I write, the rain has really, genuinely stopped. T has run out to bounce on a trampoline like a boy possessed and the weather gizmo on my phone suggests that tomorrow may be walking weather. 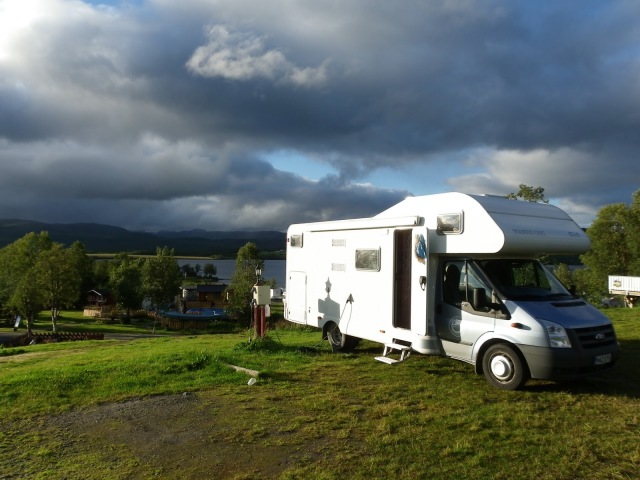 The fish was absolutely delicious by the way.