By Richard ListerAugust 7, 2013
Abisko, says the Rough Guide to Sweden, sits in a rain shadow and consequently the sky is “often completely free of clouds”. This was encouraging given the intensity of the rain we experienced overnight. Our fellow free campers had already left when we had breakfast. We had  intended to go up the chair lift to a viewpoint before walking back down, but the rain shadow seemed to be unaware of its write-up in the Rough Guide and was clearly somewhere else. The top of the mountain was in cloud, while the rest of us were in rain. It was weather to work around and we worked around it by going to Norway.
But before I describe that journey in over-abundant detail, a brief note about Kiruna, the location of yesterday’s water-slide spot. It is, it turns out, sinking. Not the water-slide area, but the whole city of Kiruna, pop 18, 148. It has been quite literally undermined. The extensive iron-ore shafts a kilometer or so below it are dragging down the city they helped to build. So they are going to move it. The whole city is to be rebuilt somewhere nearby, starting with the train station and the main road. So if you fancy the idea of that water slide at Camp Ripan, best check that you have the latest directions…

Right, we were heading to Norway weren’t we. The road wound between hulking grey and green mountains with their heads in dirty ragged cloud. We passed dark little tarns and furious rivers and stopped in Katterjak, the last Swedish outpost with a supermarket which was full of Norwegians buying cheap groceries. 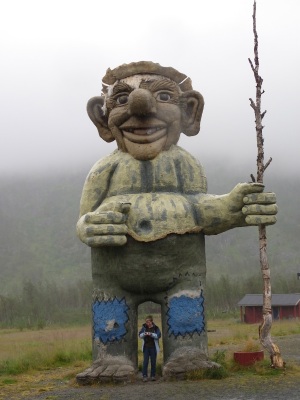 We got some too before driving onto the border; a rather anticlimactic set of dark buildings with no apparent activity. I really miss having to stop at European borders and having my passport checked and stamped. Its progress I suppose, but at the expense of romance. A little further on we found a long abandoned cafe who’s owners had at some stage had built a huge troll outside it. Now that’s more like it! It finally felt like we had entered Norway.

This side of the border is the wettest region in Norway, so not surprisingly, the rain which hadn’t let up all day, didn’t let up here either. We curled down the slick mountain road, which differed only from the Swedish side in that the center markings were yellow, not white. We passed a large stand of wind turbines turning eerily in the cloud and eventually found ourselves at sea level, just north of Narvik. We pulled down a side road for lunch in a little hamlet where a helicopter was delivering supplies to somewhere further up the fjord. It made about five trips to pick up crates from a loading dock at the water’s edge while we looked on, slurping Knorr Hearty Vegetable. 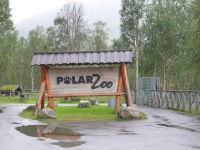 On a fine day this really would have been a stunning drive, but the rain was leeching all the energy out of it and we were all feeling tired and listless. We decided to keep pressing on towards Senja, our northernmost stop, but an hour or so further on the rain stopped and we saw a sign for a “Polar Zoo”. 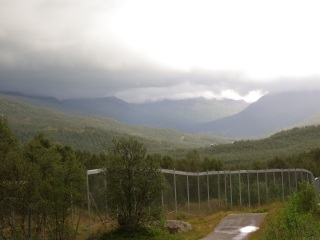 It was really rather good with large enclosures which were simply fenced off bits of the existing terrain. They warned us that it might take a while to see the animals.

To start with it did and I began to wonder whether it was such a politically correct zoo, that there was no danger of the animals ever being bothered by the visitors because their paths never crossed. But then we saw a woman at one of the fences taking pictures and there, twenty feet away on the other side was the most beautiful lynx, yawning and stretching and observing us with cool disdain. It made the hairs stand up on the back of my neck. 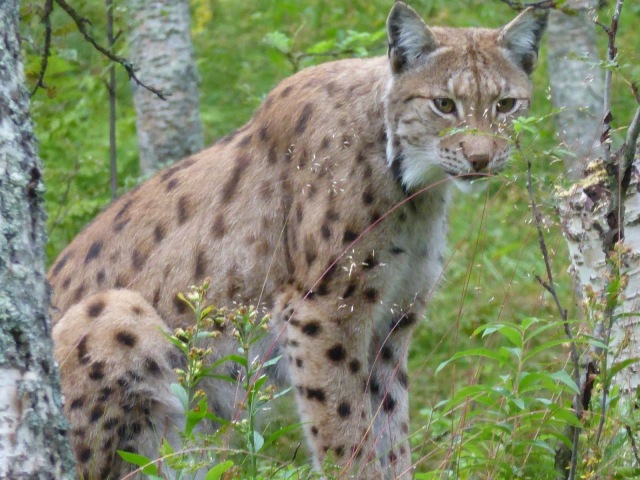 As we walked we saw a great shaggy Musk Ox which grunted at us a couple of times, and several wolves which were skittish about us being there. 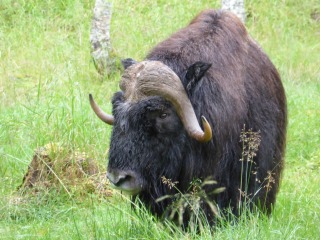 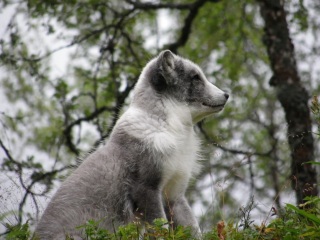 There were some bears almost close enough to touch as they patrolled the edge of the fencing and the prettiest Arctic Foxes which made me recall a rather sad statistic from the Sami museum that although they have been protected since 1928 in Sweden, there are thought to be only about a hundred left there. They are lovely little animals. 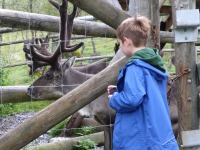 There were reindeer of course, which are always much smaller than you think. Unless you are Sami of course.

With the help of the info board in front of the animal itself, I was finally able to clear up the moose/elk confusion I’ve been suffering. What the Americans call moose, are called elk here in Europe, and what they call elk we regard as simply a kind of deer. So that’s that. Tom filmed everything in three second bursts for a video diary of the trip he is editing on his Macbook. I keep telling him that he needs to learn to be a plasterer – that’s where the money is.

Back to the car park just as the rain began again and after half an hour or so we passed a lovely little farmstead at Sørfossbøgen twenty K south of Finnsnes. Its a clutch of old red-painted timber buildings, some with grass roofs and it has a camping sign outside. We pulled in and were met by an elderly lady with peach blond hair who signed us in and apologised for the weather. We are the only campers here and in a perfect spot overlooking the slim tip of a fjord, which from here looks like a river winding to the sea.

With the rain pounding on the roof we stayed cosy with fish for supper and a movie for the three of us (“Millions” by Danny Boyle) T hopped up to bed quite happily afterwards and P and I are not long behind. Sometimes you make your own weather.