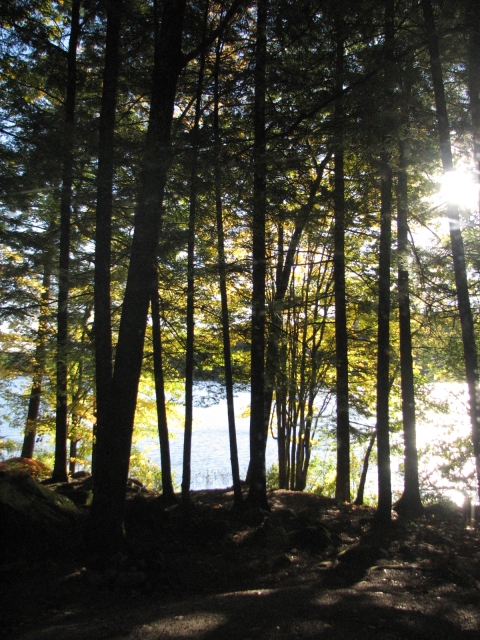 The fan heater worked a treat overnight and we didn’t need to turn on the main heating. I think the aluminised honeycomb blinds really make a difference too, stopping the heat from escaping through those big windows. When we pulled them open we were amazed to discover a large blue lake sparkling through the trees, no more than thirty feet away. We hadn’t been aware of it in the dark last night. It was such a pretty morning with the sunlight illuminating the changing leaves; flaming reds, yellows and oranges and every colour in between. The lake looked blue and cold and P and I felt we could quite happily spend the whole day in Harv, mooching about and enjoying the view. But it was too nice a day to waste so we unplugged Harv and made for the office for advice.

The lady there scoffed at any thoughts we might have had about going on the famous scenic drive. “I wouldn’t go near it this weekend” she said, as everyone else would be on it too. She recommended a trail to a series of waterfalls – “Diana’s Bath” – and drew out the directions on the map. Thus armed, we set off in exactly the wrong direction. In our defense I will only say that the map was somewhat misleading, given that it completely ignored the first junction at which we had to make a decision to turn.

But anyway. It was a long pretty drive past little cobalt lakes ringed with flaming trees, before we could turn around in the parking lot of a closed ski-lift. Traffic heading for the Frieburg fair slowed us to a crawl through North Conway and it was lunchtime before we finally got to our destination.

Diana’s Bath was well worth the effort. Its a winding, leafy hike through the woods to a series of shallow waterfalls with plenty of rocks to climb and rivulets to jump; just steep enough to feel slightly dangerous.

We met Heather and Jeff for supper in a nice restaurant with a somewhat distracted waiter who was trying not to appear overwhelmed by what is the busiest weekend of the year in Conway. The roads were clear by the time we left and soon Harv was hooked up and braced for 28 degrees F overnight with the little heater doing its thing again. But there was an unexpected extra. This weekend is the last that the campground is open and it has beome a tradition for the regular campers to go into Halloween mode (three weeks early). There were orange pumpkin-lights stretched between awnings and trees, ghost lanterns, fake cobwebs and lots of trick or treating with kids dressed up. Tom grabbed a bag and joined in – holding the torch under his chin for ghostly effect. Everyone was friendly and ready for a chat. Fires were crackling and the clear sky was sparkling with stars.