We had big plans for today. We would drive over to the eastern side of the island, cycle in the back country, eat at a hidden-away lodge famous for its “popovers” and do a little hike to take in the splendid views. Unfortunately the weather had other ideas. We woke to mist and rain. The Ranger said it was set to last all day and into tomorrow. We considered treating it as a driving day and heading south, but in the end we decided to take it easy, go to the wifi cafe at the other end of the sea-wall, then head over to the classic car museum and maybe go for a lobster supper somewhere. Somehow we didn’t do any of that either. The wifi cafe was closed, though the wifi was still on so we sat outside in Harvey and blogged with the last of the batteries in our laptops. Then we set off for the museum in driving rain and somehow ended up doing a big loop which veered off well before the museum and brought us back to within a mile of our campsite.

Teeth gritted, we pressed on to Bar Harbor and found that just about everyone on the island had done the same and it was seething with moistened tourists. We crawled through town and managed to find a space between all the cars in the RV parking lot. Public information message here: folks, an RV parking lot is for RVs. They are the big caravans with engines. If your car does not look like that, you park somewhere else because you can and we can’t. Are we clear..?

We had lunch at a place that was remarkable mainly due to its surly teenage hostess. In fact “surly” credits her with actually having an opinion about those coming in to pay her wages, when in fact she was just so utterly bored that we were like buzzing flies as far as she was concerned. Had it not been pouring with rain outside we would have walked out. But our lip-pierced waiter was a pleasant young chap and wanted to let us know that he too had travelled and enjoyed seeing the world. So all was not lost, but I fear Bar Harbor is heading in that direction. 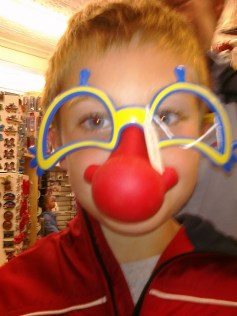 I’m sure that twenty years ago – maybe less – it was a real place, and it still has a fine harbour and hills rising behind it, but the town seems to have sold its soul to tourism. Souvenir shops line up one after the other selling T shirts and lobster fridge magnets. We bought T-shirts and Tom tried to persuade us to get lobster fridge magnets (we already have some) and we wandered around damply, killing time.

Eventually we walked back through the drizzle and escaped in Harv. 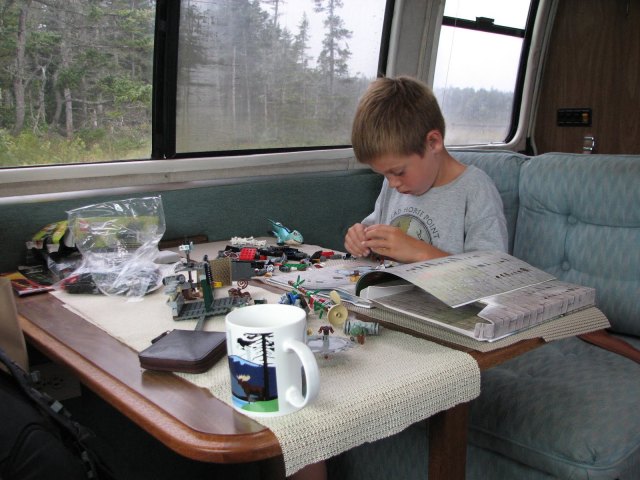 Tom was glued to some new lego as we wound through dark, treelined roads back towards the campsite. We stopped for a cup of tea at the rocky sea wall by the campground to watch the waves crash over the rocks and smell the sea.

On the other side we saw a beaver swim across the pond. That’s what Acadia is really about and I’m sorry we haven’t had more time to see it. Tomorrow though we will see what the weather is doing and try to find some more wild Maine before heading on to Cambridge and the end of this journey.