It was a perfect morning in Acadia as if the park was mocking us for leaving. Tom’s “cooking with eggs” repertoire expanded again with a quick lesson on boiled eggs, which we ate in rough wooden eggcups we’d bought for a dollar fifty each in Bar Harbor.

We’d decided that if it was raining we would scoot up to the freeway and stop somewhere north of Portland, but with the sun streaming through the trees we stuck to the coast and made for Camden. First though we followed the westernmost road in the park, which we had somehow failed to follow yesterday. This is the less traveled part of the island; the scenery is less dramatic, but it is every bit as pretty. It reminded both of us of the Devonshire countryside; narrow lanes winding through fields and woodland with scattered villages and glimpses of the sea. 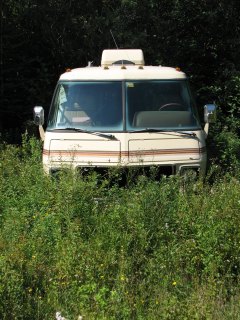 Around one curve we spotted a familiar shape in the undergrowth and I went back to check it out. Sure enough, it was a GMC with wildflowers up to its wheel wells. It was faded but seemed to be in reasonable shape.

Somehow neither of us noticed the causeway back to the mainland, but soon we were back in a cluttered forest of roadside fast food signs and billboards, mini-malls and car dealerships. But that too came and went to be replaced by handsome little towns like Ellsworth where we stopped for a break. The main street had a tiny art deco cinema and a hodge podge of interesting shops and cafes. The Maine Grind is on the ground floor of a former Masonic Hall and is just about the perfect coffee house. Free wifi (natch), good coffee in cups the right size for a normal human, everything baked fresh on the premises and even a bowl full of hard boiled eggs should you be so inclined. Tom sucked on a mango smoothy made on the spot with a real mango, and P and I settled into leather couches and made arrangements for our impending landing in Cambridge. If this is what civilisation is like, its really not so bad. 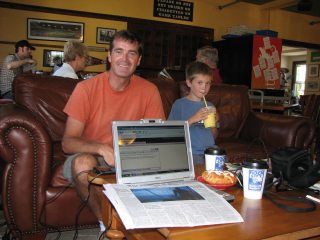 There was more to explore in the building which had various arty and crafty type places, one of which had a female manaquin in a black wig standing guard by the stairs. She eyed me coldly when we came in, before dropping a plastic arm on the floor with a crash. We both pretended not to notice.

Caffeinated and happy we rejoined Route 1 heading down the Maine Coast. The road is broad and smooth and there is clearly more money around here. Harvey woofled through prim little villages like Searsport with large, pristine wood frame houses floating on expansive lawns, spouting turrets and widow’s walks. Then to Belfast which burned down in 1865 and decided to build its main street from brick thereafter. We bought sandwiches from a red caravan where the rosy faced girl behind the counter told Philippa  “You speak English very well!” almost as if she was addressing a small child. She meant well though and went on to say how difficult she found it to understand someone she’d encountered the day before “He was from England and I couldn’t get a word he said. He had to point to the menu in the end.” The harbour was breezy and full of toy boats though Tom preferred the big rocks beside it.

Next stop Camden which is pretty but in a rather knowing sort of way with everything painted up just a bit too brightly. Its also somewhere that seems to prefer RV’s to park somewhere else. Like Belfast. What parking there is, is clearly aimed at cars and one availale space was signposted “no RVs”. We found two spaces on our second pass through and took them. The harbor was busy with pleasure boats, from multimillion dollar luxury cruisers to a tiny little traditional sailboat with a single sail we saw heading out. Someone had carved wonderful faces into the remains of an old jetty, and they stared eerily across the water.

Our campsite was a few miles further on and gave us our last night in Harvey, for a while anyway. We used things up in the fridge in a rather eclectic sort of pasta followed by blueberry pie, which is a Maine staple. Then we had a walk down to the sea at a small overlook. it felt like saying goodbye to this trip in a way. One more family movie on Harv’s drop down screen; we all chose Wall-E which is really one of the loveliest things to come out of Hollywood. To the city tomorrow and new lives doing new things, but first, a final day on The Road.