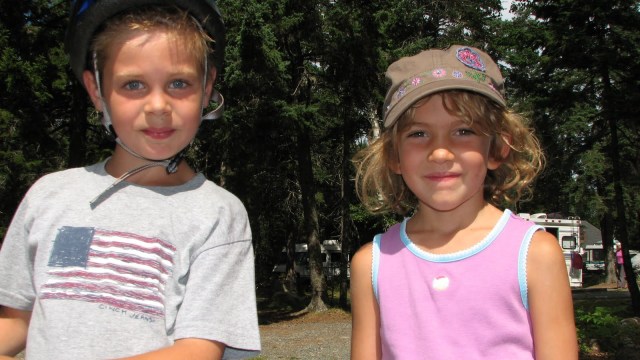 Tom did wait until eight and then pulled on his clothes and rushed out. P and I were sitting up in bed having tea when Sophia appeared at our bedside full of conversation. She is a real livewire; cute as a button and with the same kind of bouncing-off-the-walls imagination as Tom. They are friends as if they always have been. Philippa and I put some breakfast things outside and then sat back and waited while the two of them ran around. Eventually Sophy joined us for breakfast and we listened in while the two of them had stream of consciousness conversations. Tom told Sophy about his “gorilla dreams” and she told us about her cousins and the dog that died. “He didn’t make it”. she said simply.

Then it was back to the bike and scooter and drawing pictures of fruit to stick in the trees so they could pick them like monkeys. It was the most fun he has had in ages, and very sad that Sophy and her family had to leave. They had come from Chicago and were heading to Prince Edward Island. Tom waved them off. He later told Philippa that he had had a dream that night where he saw his initials carved into a tree with someone elses and a big heart around them. “What were the other initials?” she asked “It was M” he said. Which left us none the wiser. 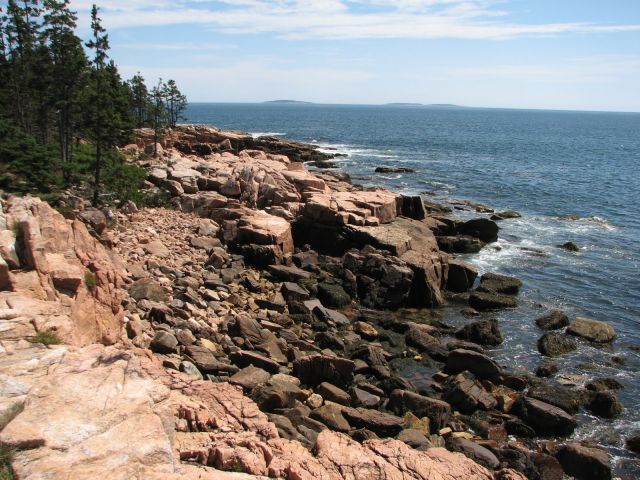 We dusted off the bikes and set off for a trailhead to the coast which was a couple of miles away. Our first sight of the sea was a shallow lagoon lined with a carpet of mussel and clam shells. We walked out onto a sandbar which was becoming an island when we got back to the beach as the tide was coming in fast. We clambered over big rocks and had a picnic watching breakers crash just below us. The Pres had done exactly this walk a couple of weeks before and I hope it was a day like this – blue and blowy with dazzling sunshine and brilliant white spray thrown up by the waves.

We biked on further to Bass Harbor for a drink at a cafe overlooking the water. We could have stayed all afternoon, but we’d had lunch and it was too early for supper so we dropped our bikes at the campground and caught the free shuttle bus to another trail. This one went steeply up through a tangle of tree roots and rocks before coming out at a great overlook next to Somers Sound which is apparently the only fjord on the easter seaboard, though I am not exactly sure what that means. Below us a good sized yact was heeled way over in the wind and the deep blue bay was a mass of little white boats. Its a grand spot.

The shuttle bus took us back to the campground and supper and a movie and another day to come in Acadia. All is completely quiet around us. Where did I put my guitar…