The wind got up overnight. Sharp gusts that rattled the tent before everything became perfectly still again. Then another gust, like a ball of wind ricocheting through the dunes and into our tent before heading on its way.  It continued like that for most of the night but all was calm again in the morning

At dawn Philippa scooted out of the tent and up the big dune to watch the sunrise. I followed a couple of minutes later and boy was it hard work getting up that steep ridge.

A gleaming sliver of pink sun was just emerging over the sand when I got there, and we climbed further up to see it rise over the sweep of the desert. Our tent and sleeping son were now out of sight far below. It was utterly peaceful and we watched the desert changing colour from tawny brown, to rust and amber and gold. 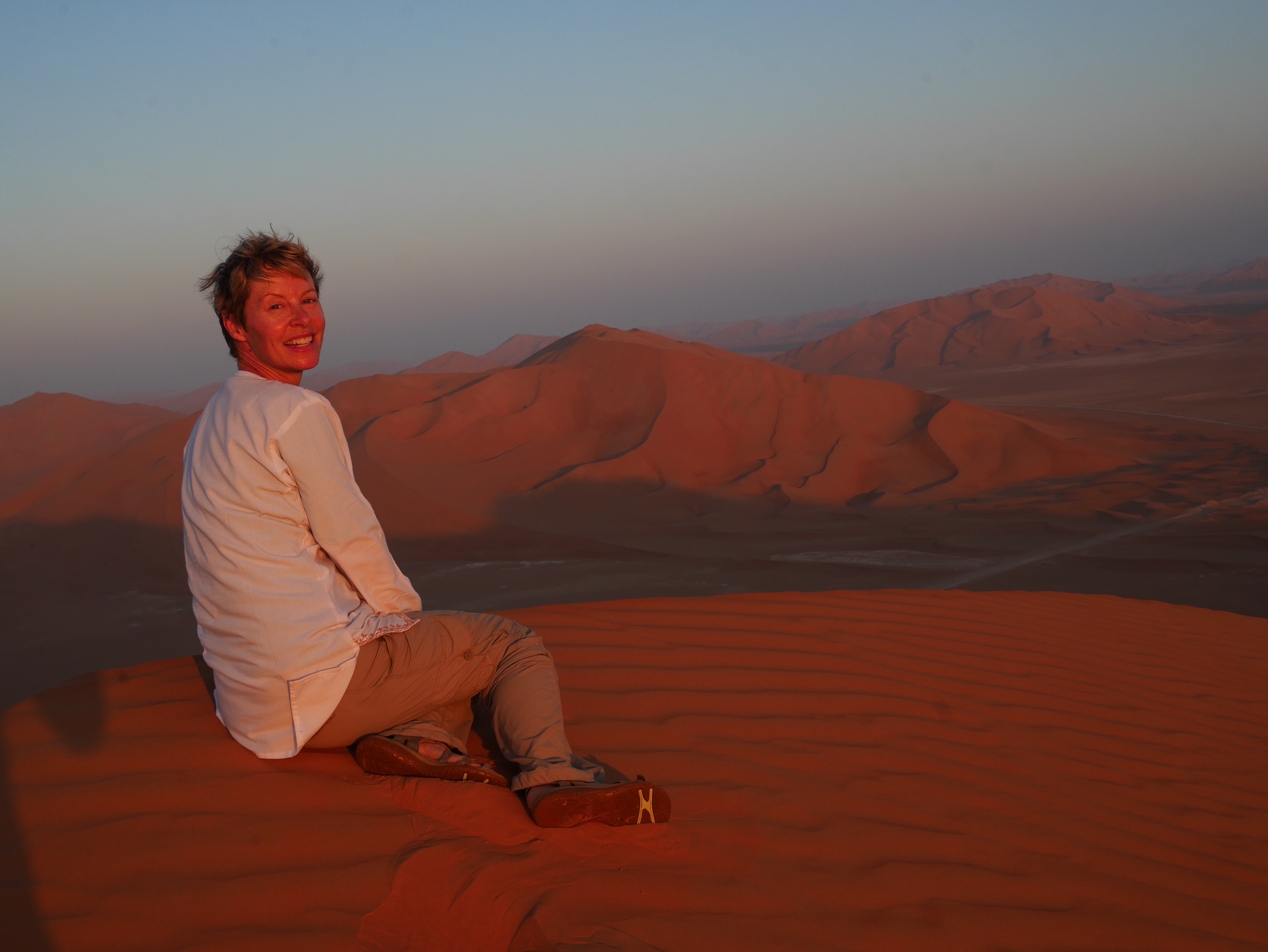 Back down the steep slopes in the cool sand, my legs dug in almost up to the knee with each step. The camp was still in shadow and likely to remain so for an hour or so, so I got the stove going. Tom emerged for hot chocolate and then scrambled eggs (love that stove – did I say?). 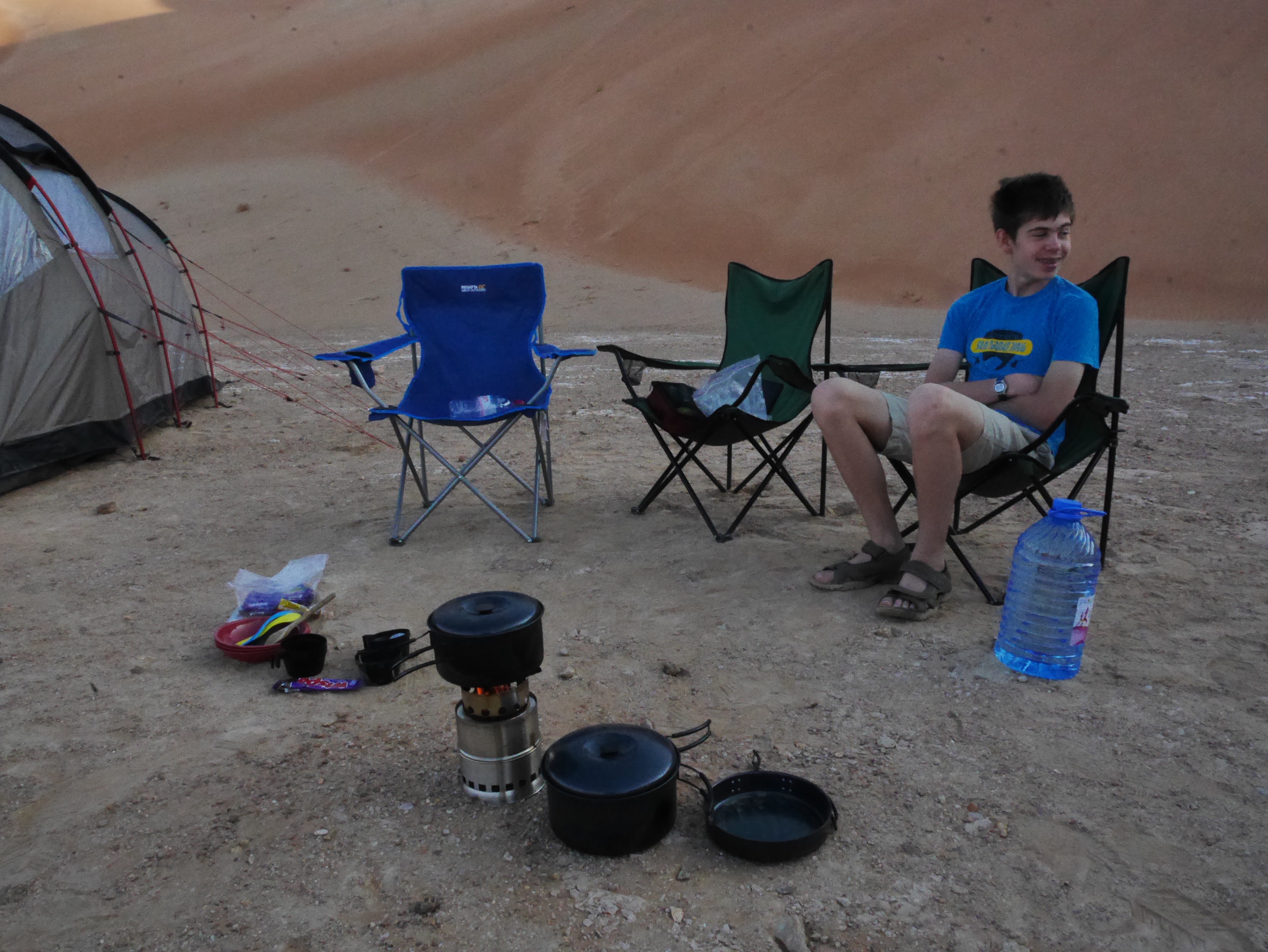 Some of us were a little bleary at dawn…

Then he was straight up the dune  while P and I began the process of breaking camp.

Eventually the three of us got everything packed away, as the sun finally hit us and the heat bounced off the stony plane.

I set the satnav, turned the key in the ignition and was rewarded with a blood-freezing series of small clicks.

Maybe I needed my foot in the brake. Click click click. We were all alone, off the track in the Empty Quarter with a car that wouldn’t start. It had started every single time without hesitation over the previous two days, but now of course it had broken down. I popped the bonnet and cleaned up the battery terminals. Click click click. It was an automatic so no way to bump start it. Click click click.

We did at least have plenty of water, enough food and some shade, but if this was a starter motor issue, we would need a tow truck and the nearest garage was 100Km down the track in Shisr. And worse, it would kill the end of the holiday. Tom said “Well, I guess I can catch up on some homework” and pulled out his tablet. P reached for her Kindle. I switched on the satphone and dialled the car rental guy in Salalah. “That number is not available at the moment” said the voice. I rang the Muscat office and it rang out. It’s Friday – the weekend. But about three unanswered numbers later I finally got hold of the Muscat agent, Nithin. I told him what had happened and could hear him going white. “I’ll call you back” he said. But moments later we saw a white SUV off in the distance heading down the track and Tom and I waved it down. It was an Omani tour guide with a Swiss family coming back from a sunrise tour in the desert. They pulled off the track and drove over to our camp. Khalid the guide had a go with the ignition and we all thought it sounded like a starter motor problem. Then I remembered that my plug-in cigarette lighter adapter would also show what charge the battery had. I plugged it in: 9.4 volts. Enough to turn the starter a bit but not enough to properly engage it. Khalid had a portable battery pack, he attached it to our battery and vroom. We were sorted.

It was such a relief. We would have been OK one way or another but it could have been a long, boring day waiting and trying to stay cool. What was mystifying was why the battery should suddenly have lost charge. I’d been careful to unplug the various plugs from the car’s 12v outlets when I noticed they didn’t turn off with the ignition. But not careful enough. The three quid gizmo for listening to Stephen Fry read Arthur Conan Doyle was still plugged in under the armrest, belting out Bluetooth as hard as it could all night. It was just enough to strand us in the desert.

We offered Khalid our heartfelt thanks. He was taking the Swiss family to Fazaya Beach which was to be our final destination today. I was pleased (and so were they probably) that we hadn’t delayed them unduly.

I called Nithin at AST and said were were sorted. Then we were on our way again, back to Shisr for fuel and a chat with a bunch of lads at the garage. They were in a jolly mood, messing about and  avoiding the heat. They didn’t have much English but asked where we were from and where we were going. They were so friendly and such a striking looking bunch. Tall and slim with strong faces and white teeth. One had just been milking his camels and gave us a plastic bottle of camel milk which we put in the cooler. Thank you! Goodbye!

We wanted to head due south and could have retraced yesterday’s steps on tarmac, or cut straight across the desert to Mudayy on a track. We went for the track and it was a filling-loosening, spine-jarring ride across featureless stony desert. Yes we should probably have gone the easier route. After two hours we hit tarmac with the opting of turning right to Yemen (about an hour’s drive) or left to Mudayy. We turned left.

Mudayy was a scrappy little place where just about every every grocery shop – no matter how tiny – advertised itself as a restaurant. We knew of one called the “Pakistani restaurant” and it had huge trucks parked in front.  But when we got there, there were a couple of small tables with plastic chairs and not a hint of food being served, so we bought cold drinks and made polite, if limited conversation with the fat man leaning on his chair who’d been speaking Urdu with his friends. They encouraged us to stay, but we still had a fair bit of ground to cover. And lunch to have. 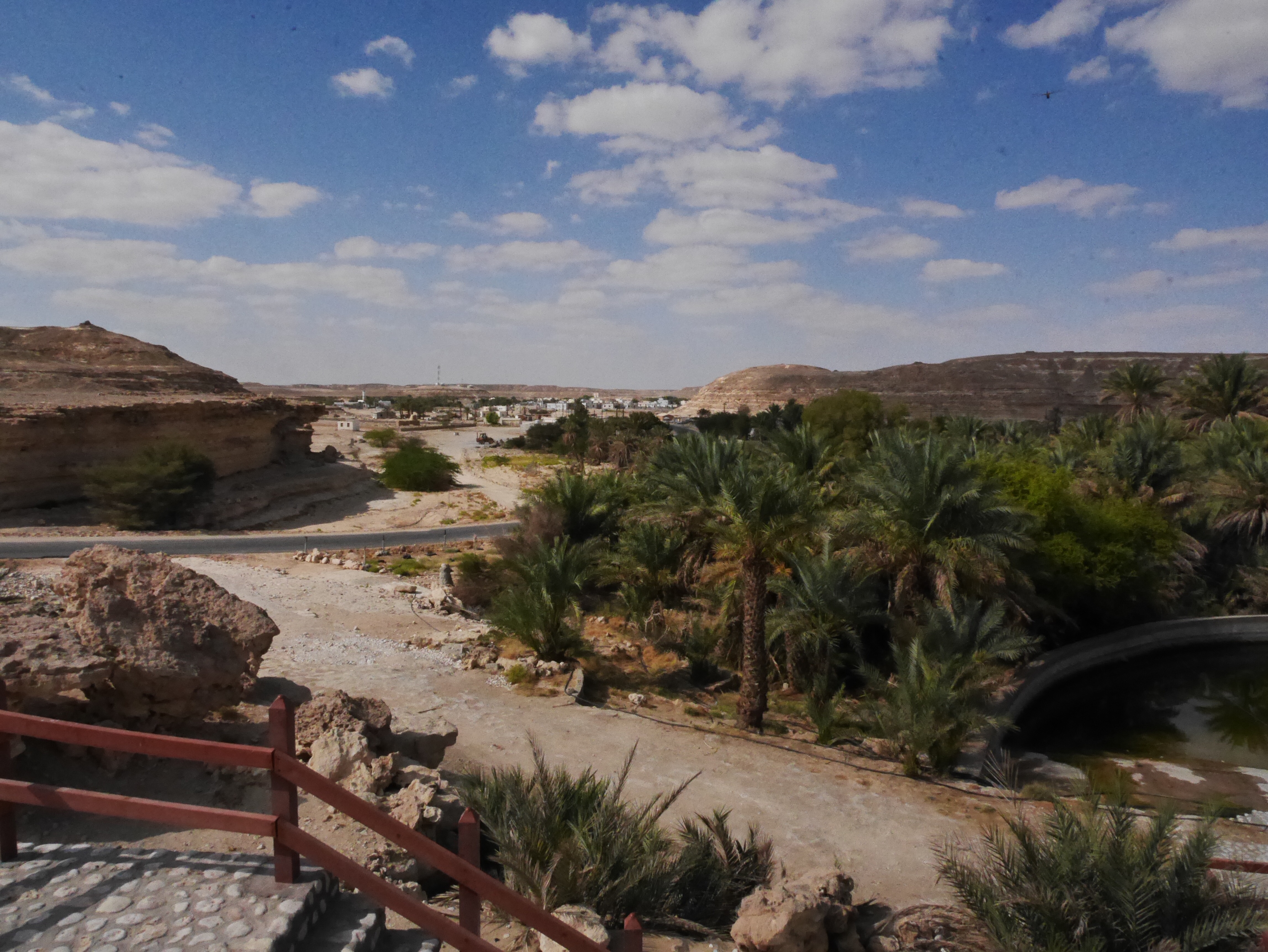 We found a little oasis park at the edge of town, with palm trees around a green tank pond. There were seats in the shade so we had cheese and tomato sandwiches like the English people we are.

The tarmac road south from Mudayy lasts about a kilometre before turning into graded track. But it was smoother and the landscape became more interesting; deep sandstone gorges carved out by the monsoon rains. The track looped and curled over and through the canyons and followed dry wadis. We passed a couple of military bases before hitting smooth, smooth tarmac again. And immediately the landscape was different. Fuzzy with grass – drying out now – but it had been lush a month or so ago.

There were camels wandering about everywhere, and cattle grazing too.

We drove parallel with the coast, looking down on the blue ocean from high in the cliffs. At an army checkpoint we slowed to show our documents to the soldier with the gun at the barrier. But he flashed us a smile and waved us through. We

At the sign to Fazaya Beach we turned onto a rutted track which went steeply down the cliffs, and into a beautiful broad shoreline with golden sand turning to scrub back to the cliffs. The beaches came and went for about five K and we went to the end before returning to the penultimate beach to set up camp. But first, into the warm sea. Big waves were breaking and we body-surfed as the sun set. A little further along we spotted Khaled with the Swiss family and brought him a pack of dates to say thanks. He made us sweet tea and we all compared notes on where we’d been in Oman. Pretty much the same itinerary in fact and we’d flown in to Salalah on the same flight too. Small world.

Our tent is up, on the beach facing the sea. We’ve had supper and we are sitting in the dazzling moonlight watching the surf roll in. The Swiss are camping at the other end of the beach but other then them we have this stretch to ourselves. Bed beckons. I’m very glad we got here.  There can’t be too many people who can say that because of Stephen Fry they were almost stranded in the Empty Quarter…