This is the day that I have been waking up at five in the morning and thinking about for months. It has required the most planning, the most conversations, the most emails and the most equipment. We’ve bought a folding shovel, portable sand tracks, a tyre compressor and rented a satellite phone. We have the phone numbers of everyone in Oman that might be in a position to help if things go wrong but ultimately my job is to make sure that it doesn’t. Today is the day that we head north into the largest continuous sand desert in the world. The Rub al Khali – the Empty Quarter which spreads north into Saudi Arabia and west into Yemen. It is six hundred miles long and three hundred miles wide. Thesiger trekked through it by camel and today we would follow in his footsteps, setting off from Salalah and heading north over the mountains and down into the desert.

But first, a posh Hotel Breakfast on our terrace overlooking the marina. This is a huge development just outside Salalah. A complex of luxury hotels, apartments and boutique shops. It feels somewhat empty at the moment but this whole coastline is going to look very different in a few years if the number of bulldozers is anything to go by.

We checked out and headed to Lulu’s for three, five-litre drums of water, some food and a means of playing audio books through the stereo; a three quid Bluetooth device to give us our fix of Sherlock. We have a lot of driving ahead of us.

The road north from Salalah – and there is only one – goes all the way to Muscat a thousand kilometers away with few distractions in the way. There was still plenty of greenery from the monsoon as we climbed into the mountains. Valleys full of trees. Camels munching grass. Several were wandering along the verge of the highway too. The steep road was crawling with heavy trucks crossing the desert and finding the gradient hard going. When we came to the top, we slowed for an army checkpoint but they waved us through. We were less than a hundred miles from the Yemeni border.

The road at this point was a proper six lane motorway with streetlights and speed cameras. But everyone pelts along it. We sailed through dead flat desert but some of it was being cultivated and there were odd buildings scattered around. We followed the old frankincense trade route and at one point we pulled over to see a small plantation of frankincense trees.

They looked brittle and ancient, bowed by the wind. 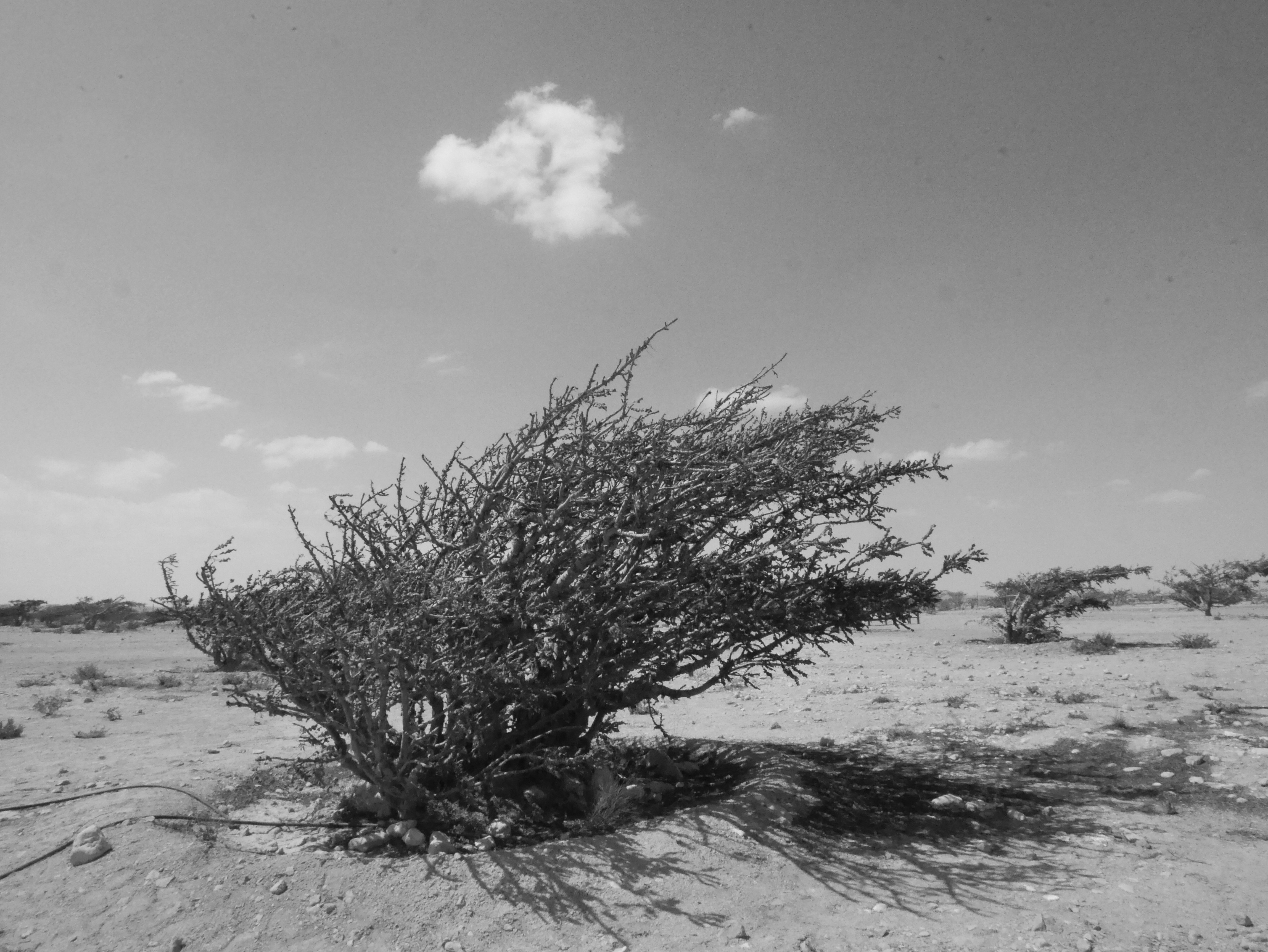 And on, to Thumrait which appeared at first glance to be not much more than a glorified truck stop but in fact is a decent size town, and as with everywhere else here, getting bigger. We refueled – the opportunities are few and far between here – and found a restaurant for lunch. We got a single dish each and when they came, remembered that one dish for three of us would probably have been fine.

Tom had an egg biriani and P and I had various kinds of noodles, and there was hot sauce and yogurt and a fresh salad and lemon with mint to drink and we did our best and then some, but couldn’t finish it all. And the bill was about a fiver each.

On through the flat desert and then we turned left off the road to Muscat, onto a two lane strip of tarmac that heads north west towards Shisr/Shisur/Shasar depending on the sign/guidebook/map.

Even here there were small farms and surprising stretches of green. We saw men baling hay and stacking it onto a lorry. Great irrigators stretched across the land, but around the islands of green, dust devils whirled and low dunes stretched sandy fingers into the road.

At Shisr we turned off to look at the allegedsite of Ubar, the “Atlantis of the Sands”.. 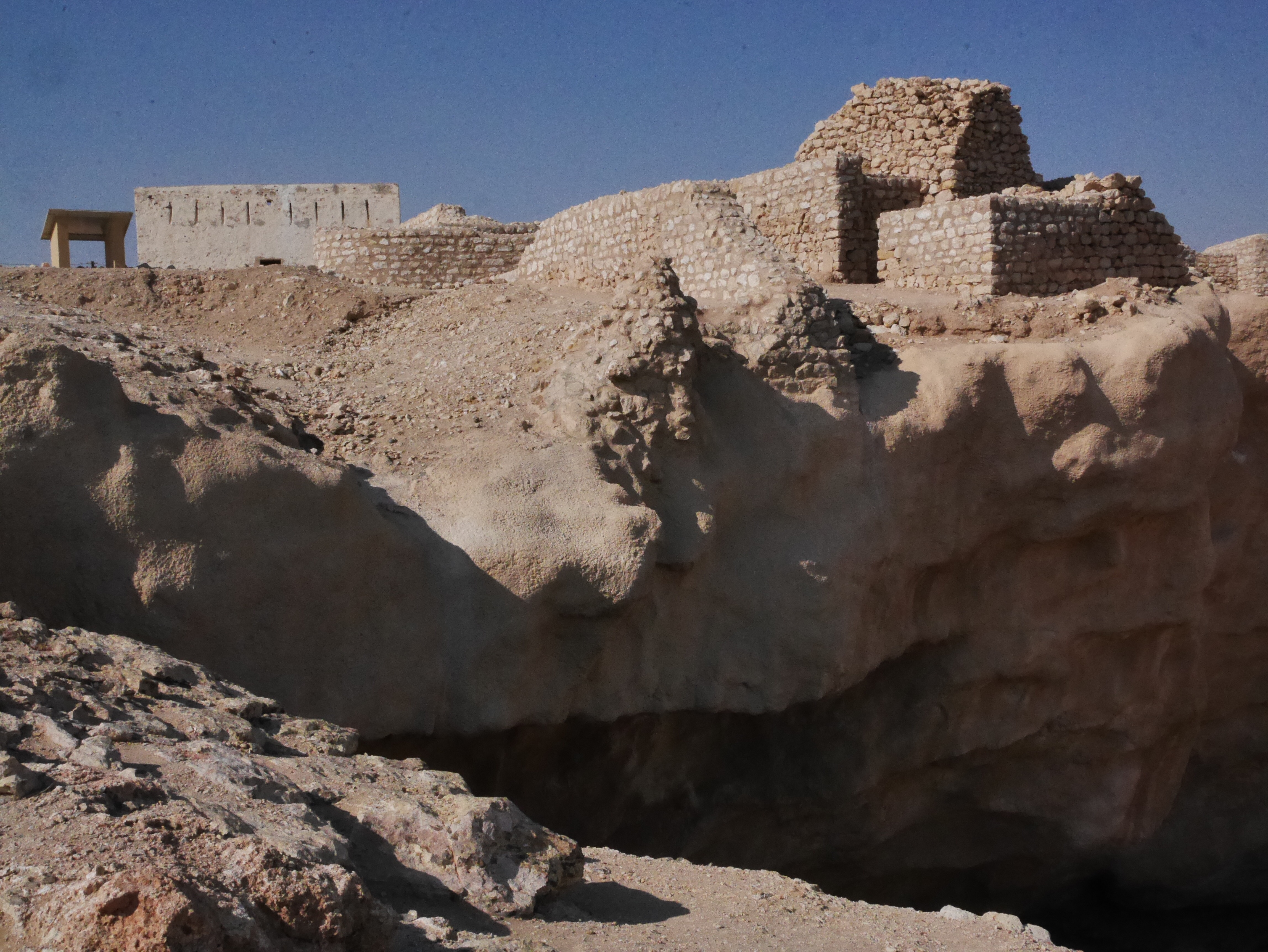 Legend has it that the ancient city of Ubar was once the most decadent in the Middle East with pillars plated with gold and various other excesses that incurred the wrath of God who caused it to be swallowed up by the sands. Well various adventurers including Sir Ranulph Fiennes set out to find it and using satellite images they settled upon a site in Shisr where a sinkhole was revealed to have swallowed what looked like the remains of an ancient fortified caravanserai.More excavation revealed that it had been in continuous use since at least the Iron Age. They also found a medieval chess set.

We walked around the remains of the old fort’s stone walls and down to the sinkhole. It was not hard to look across the desert and imagine camel trains arriving laden with dates and frankincense. Ubar? Maybe…

On the way out we met a tall dishdasha’d Omani called Abdullah who’d studied at Bangor in Wales and told us all the places he’d seen in the UK. And had we enjoyed Oman, and were the people friendly? Yes on both counts. He offered to guide us into the Empty Quarter but we politely declined. We took his number though just in case…

Next door to the ruins was a little shop selling cold drinks so we had coconut water and mango juice, drinking them in the shade outside and waving goodbye to Abdullah.

A few K further on were a couple of lonely petrol pumps, and a guy who will deflate your tyres for the desert, so we took advantage of all of that and continued on the tarmac. Less than a kilometer further on, the tarmac ended and we were on graded desert, shadowed by a line of telegraph poles marching off to the horizon. 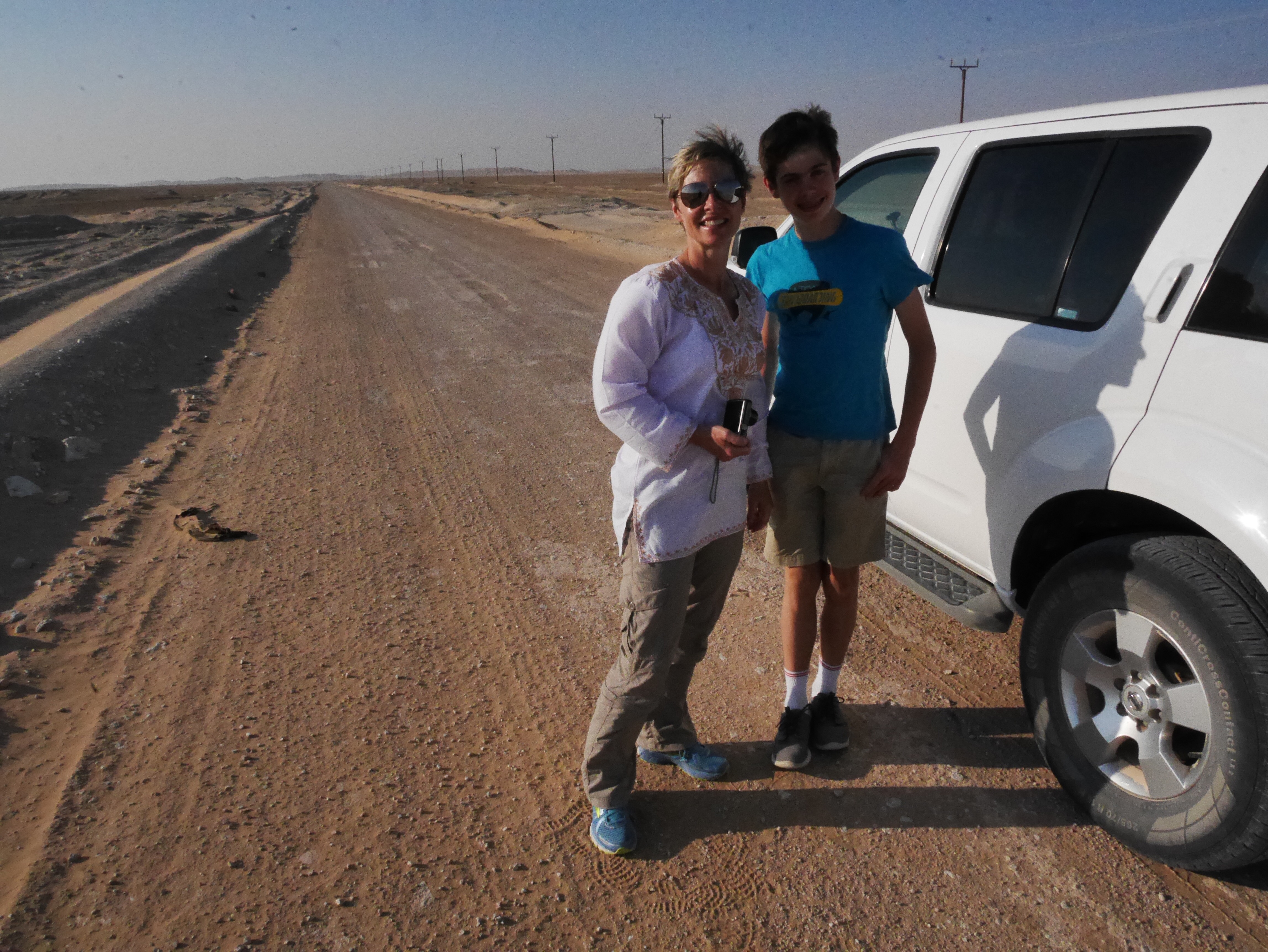 No farms here, though a couple of trucks came the other way, billowing dust behind them. 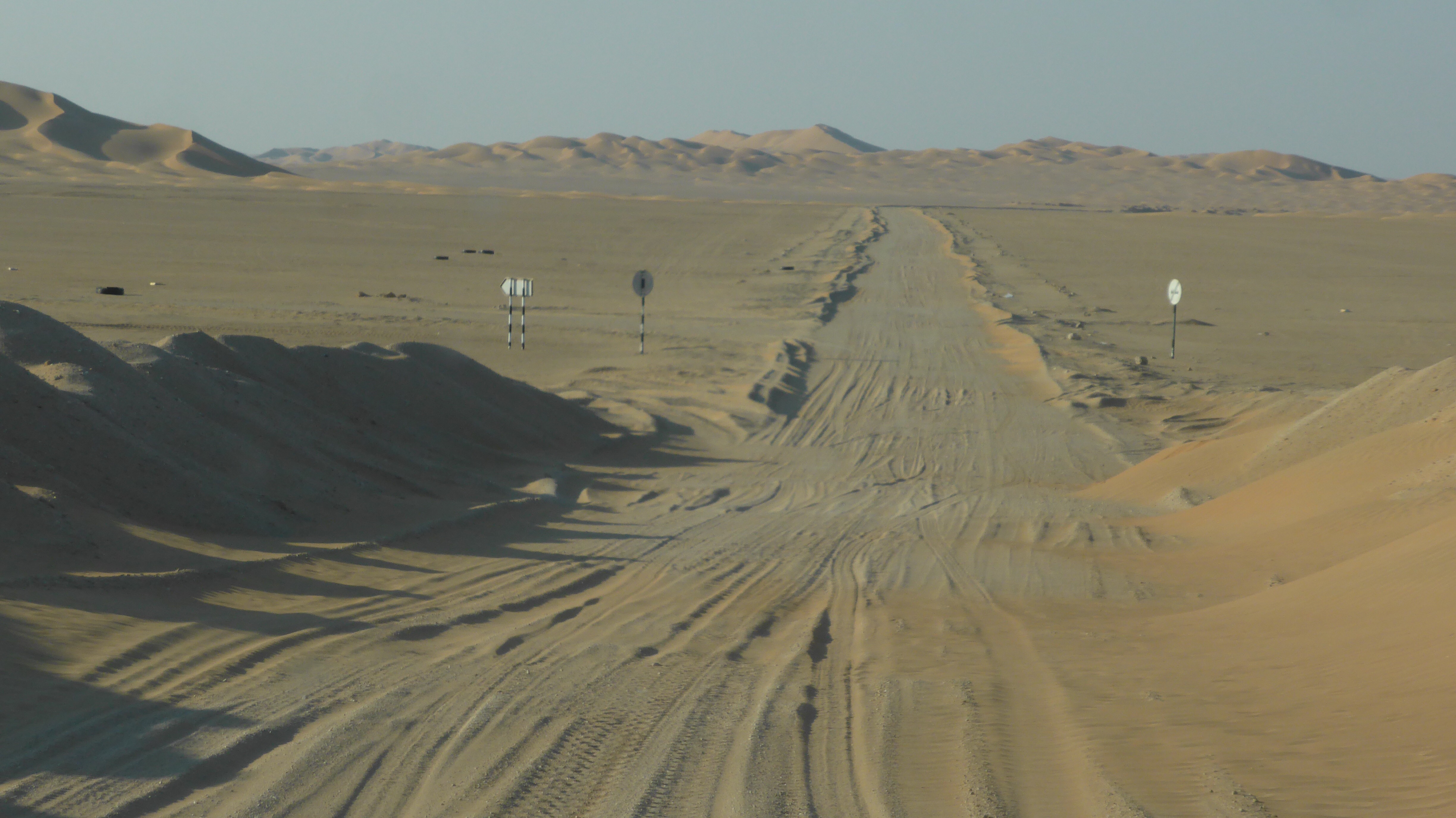 And then off in the distance in the late afternoon sun, a line of big dunes marking the start of the Rub al Khali. It was a thrilling, awe-inspiring sight seeing these huge hills of sand lined up like the border into another country. 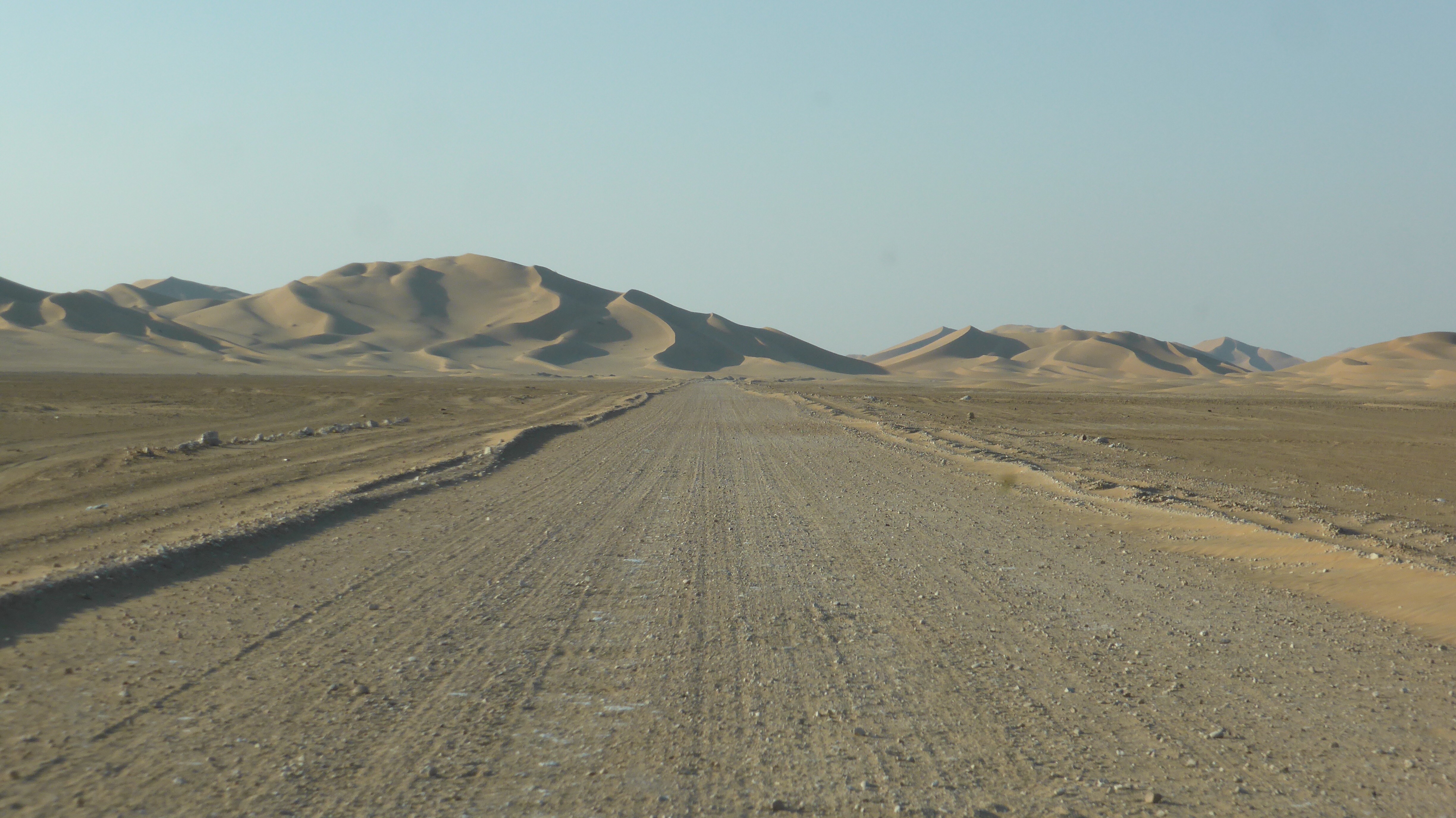 Now we were really on our own and the track was in places more desert than track as we wound into the giant dunes we’d been watching.

The sun was low, highlighting every ripple and curve in every dune. The sand was lit orange, peach and apricot. It was stunning. We drove on for about twenty K until we came to a huge curved dune with what could almost be a dried lake bed at its base. It was smooth and flat and perfect for camping. We drove across it and set up the tent in the lee of the dune. 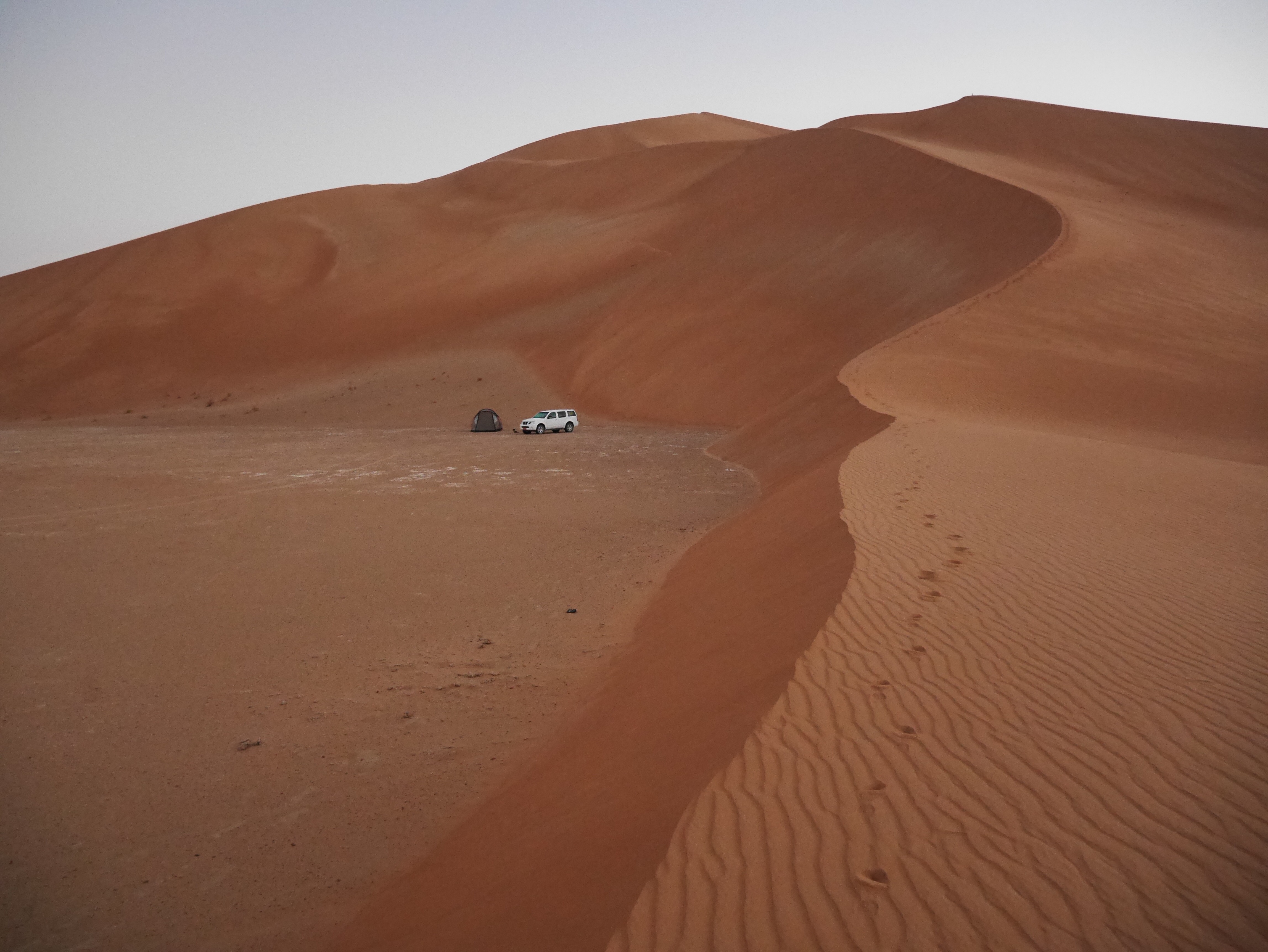 The sun was going down so we fought our way up the ridge of the dune to look out across the glowing desert.

Just us and the dunes as far as the eye could see. 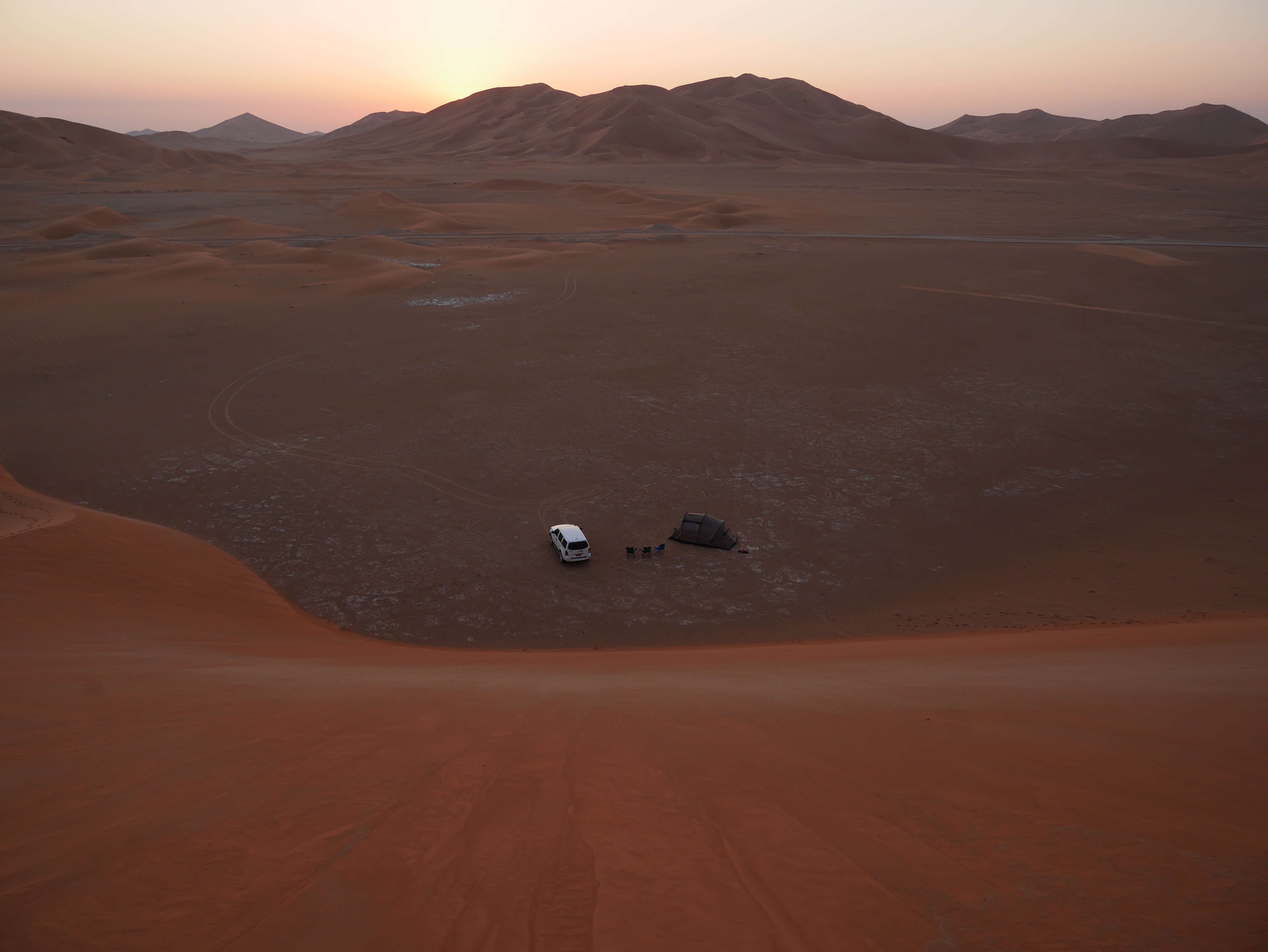 As we ran back down the sheer slope the sand groaned and boomed, an extraordinary sound. 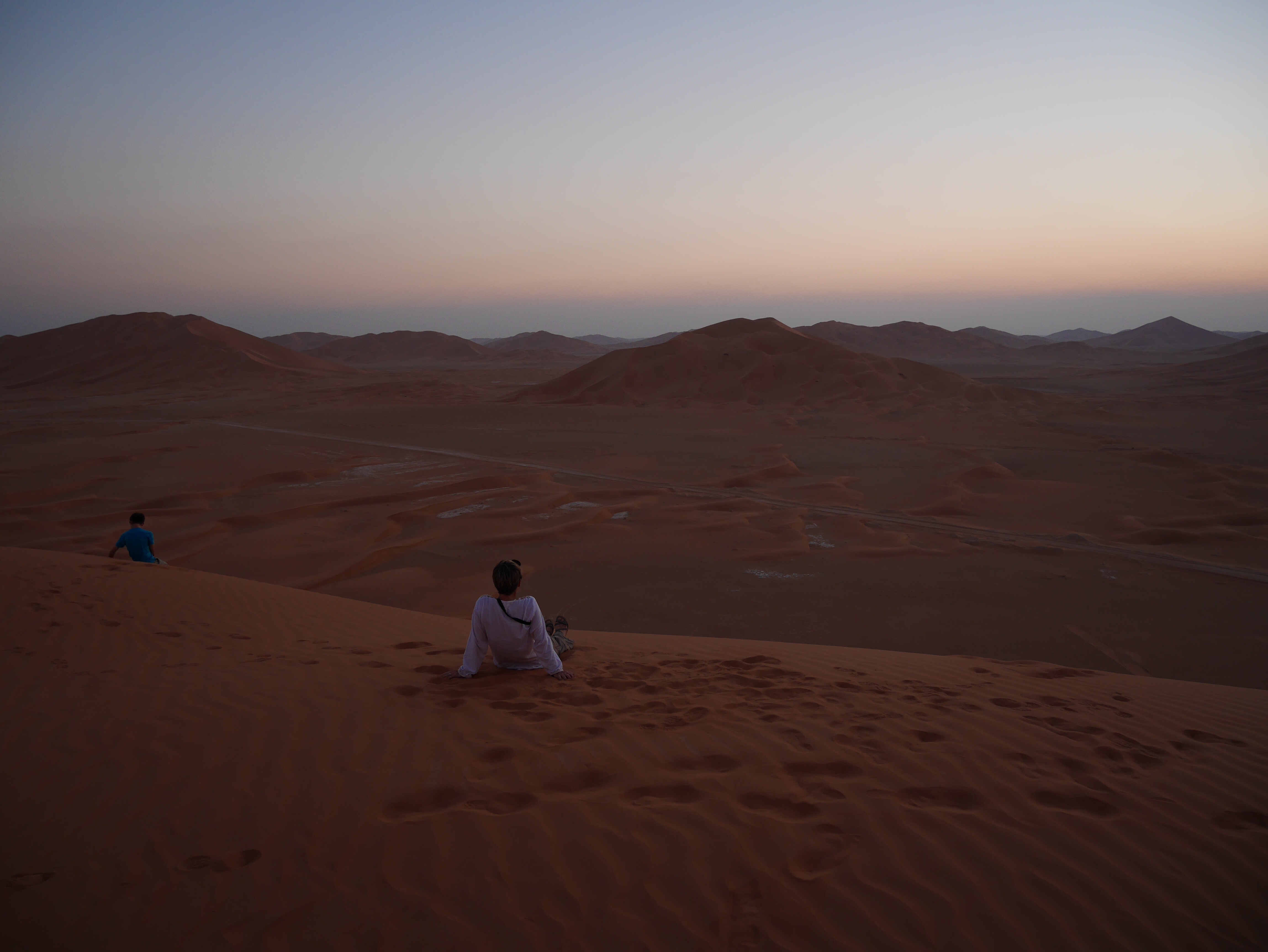 I got the stove going, and heated up the curries we’d got in Lulu’s and discovered that they like ’em hot in Oman! It seemed appropriate though.

Now the moon is almost full, breaking through dappled clouds and it’s so bright we can see each other’s faces quite clearly. The three of us are casting long moon-shadows on the sand and the dunes around us are so well lit that we can still see their apricot colour. The silence is absolute. No cars, planes, animals, insects, people. And the air is completely still. It is a wonderful place to be. I’m so glad we came.