I was briefly aware of a distant muezzin at dawn but slept on for another hour or so, until sunlight was shafting in from around the shutters. It’s warm but fresh at this hour and after breakfast we set off to explore the village. We followed the falaj which gushed under houses and through sluices and off to the plantations around us. 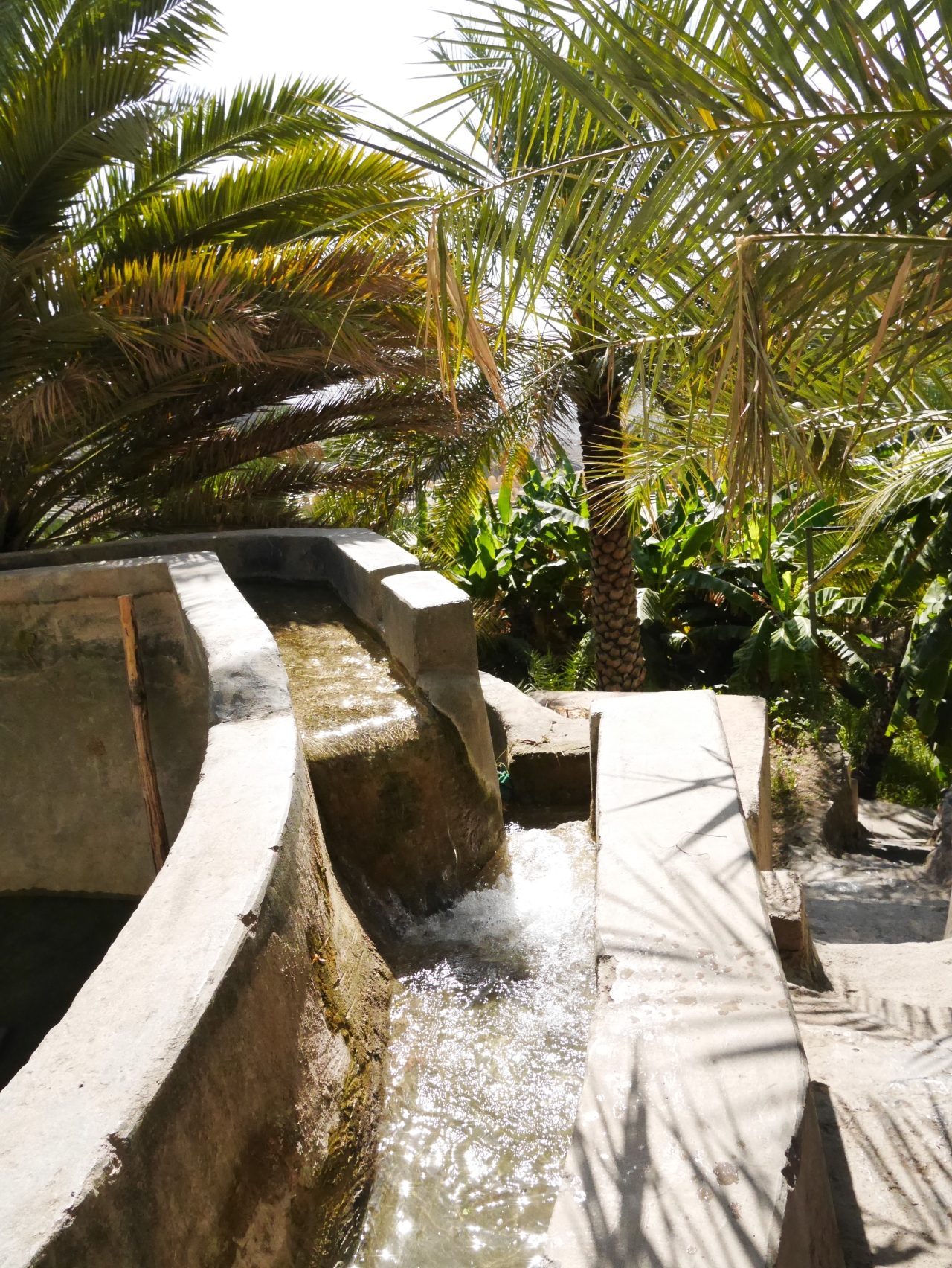 It would have been nice to see how they controlled the flow which was constantly being rerouted but we never saw who was doing the rerouting. The sun was getting hotter as we walked to the edge of the village and then along the edge of the canyon.

There were several watchtowers. I climbed up to one and saw that what we had taken to be a small, high window was actually the doorway, reachable by a single stone step jutting below it. 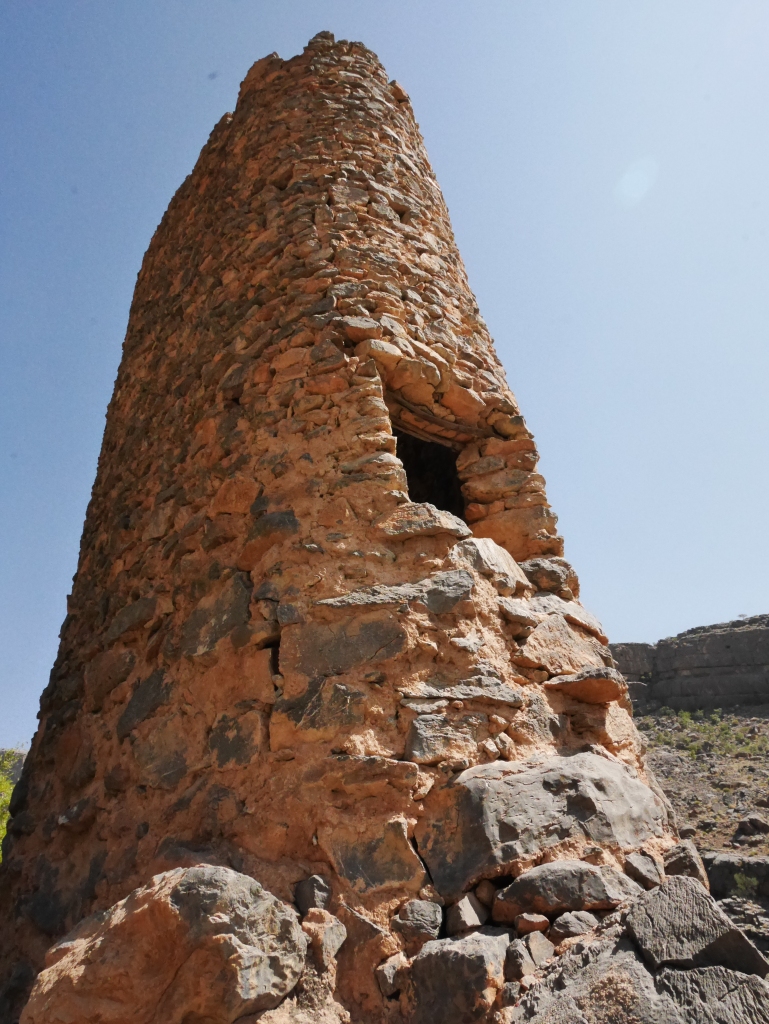 Every old building in Oman seems to have been designed around how best to defend it. With the heat building we stopped at a point overlooking a cultivated area in the valley bottom, with another defensive tower. Birdsong echoed off the cliffs.

Back at Misfah Old House, the manager plied us with cold bottles of water and a porter to carry our bag back to the car, a five minute walk away at a parking area outside the village. 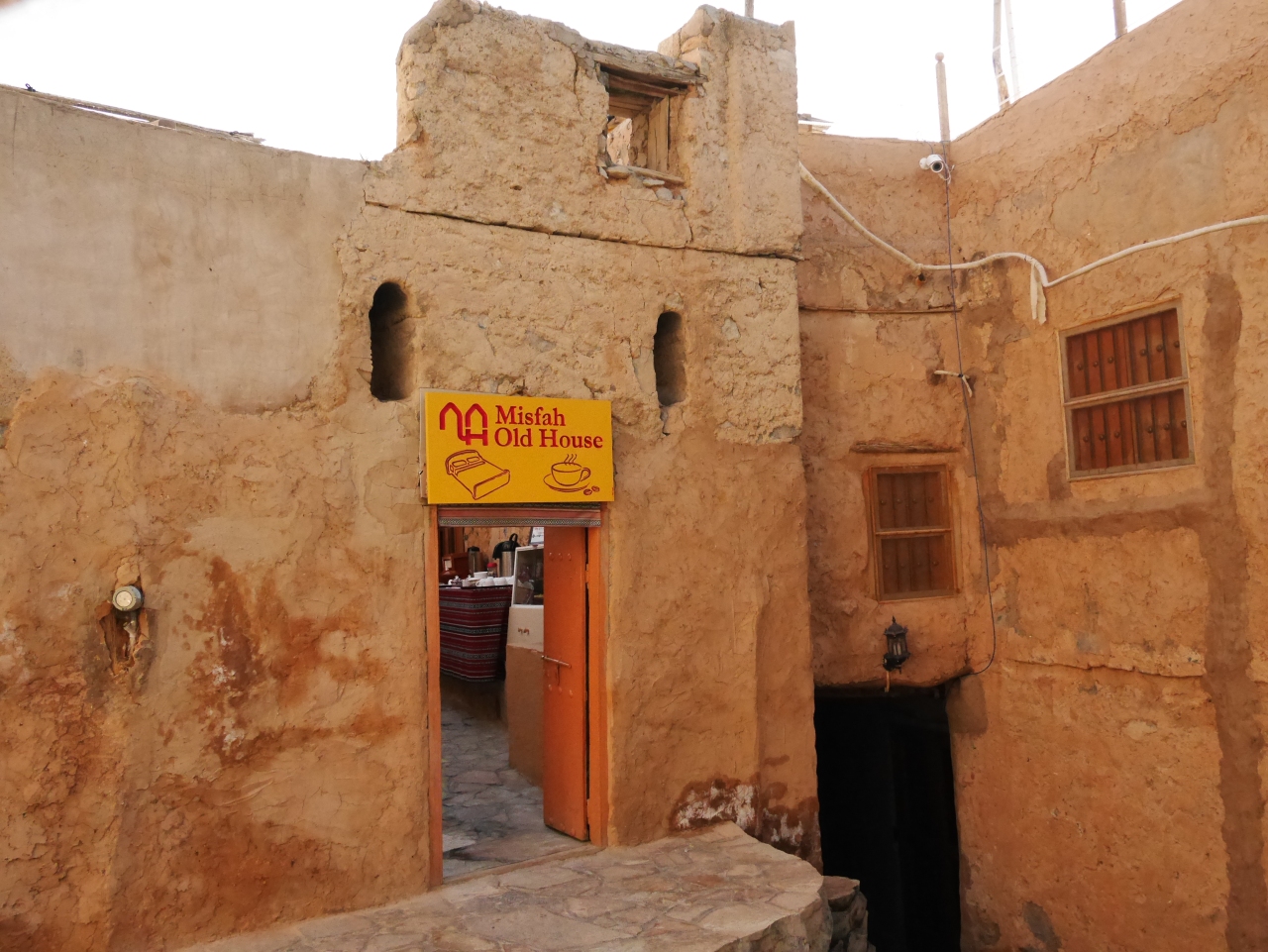 Next stop, the nearest supermarket for some picnic lunch essentials. We stopped at the first one we saw which said in the door “please note, supermarket for ladies only”. P donned a headscarf and went in. Only to come out two minutes later as they had nothing we needed. We went on to a bigger “hypermarket” at the edge of town and got large bottles of water, tomatoes, and fruit. But no bread. P found a bakery two doors down and bought six chapatis for 20p.

We were heading to the old part of town but stopped first at one of the juice bars which seem to be everywhere in Oman. It was a tiny place, steel and tile and immaculately clean. I had a glass of watermelon, T had mango and P kiwi juice, which we all agreed would be better mixed with something else.  Al Hamra is a friendly little town. When we first stopped here an old man in dishdasha and turban went by a tractor giving us the once-over with beetle brows. I smiled at him and he beamed back. People here seem genuinely pleased to have visitors. Everyone, but everyone is friendly.

On then to al Hamra old town which is really at the edge of the modern development. It is supposedly one of the best preserved mud brick settlements in Oman and it is really astonishing. 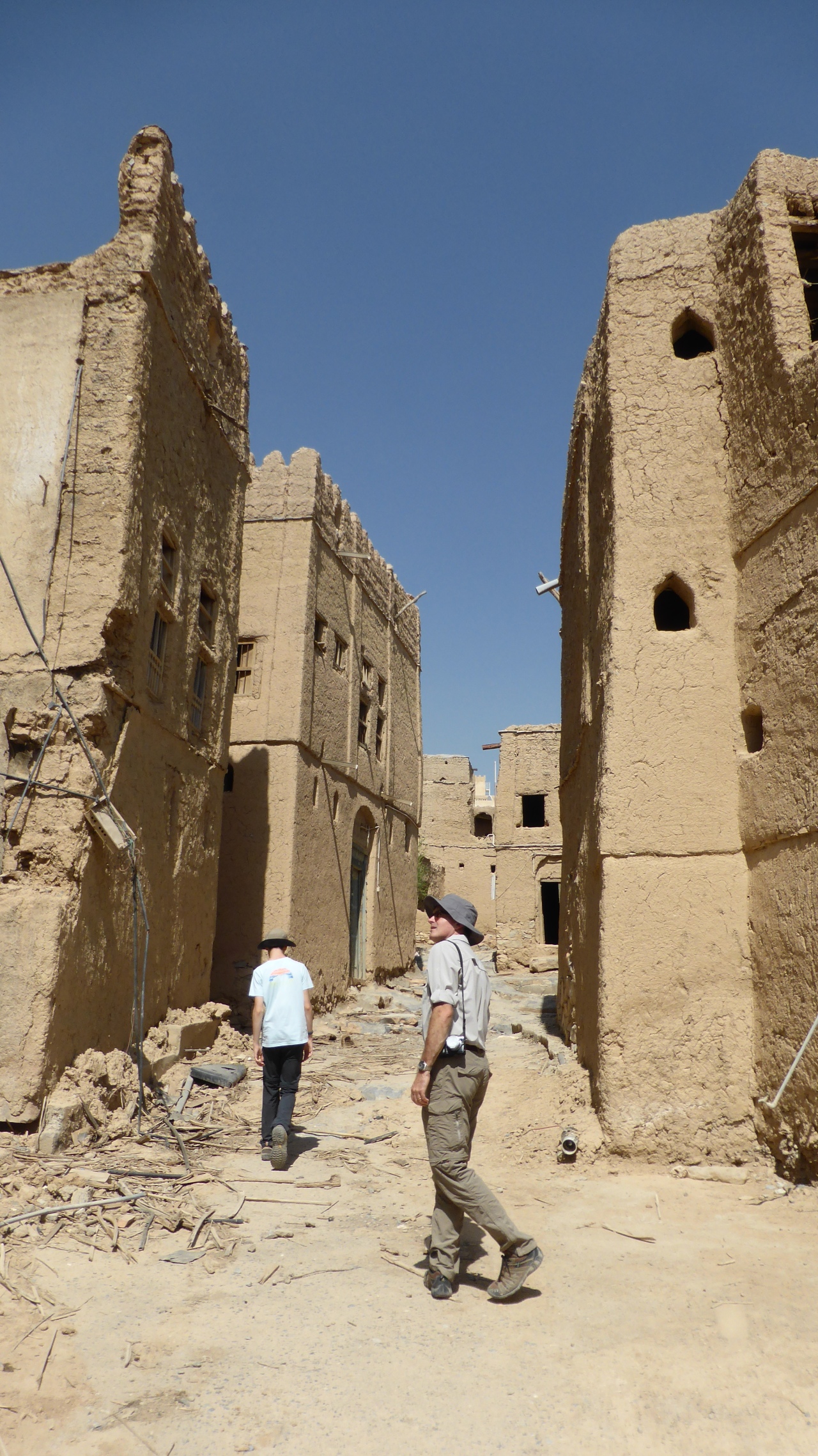 Sadly, most of it was derelict and crumbling. People have moved to newer buildings but some are still inhabited and the date plantation which was its raisin d’etre is still flourishing. 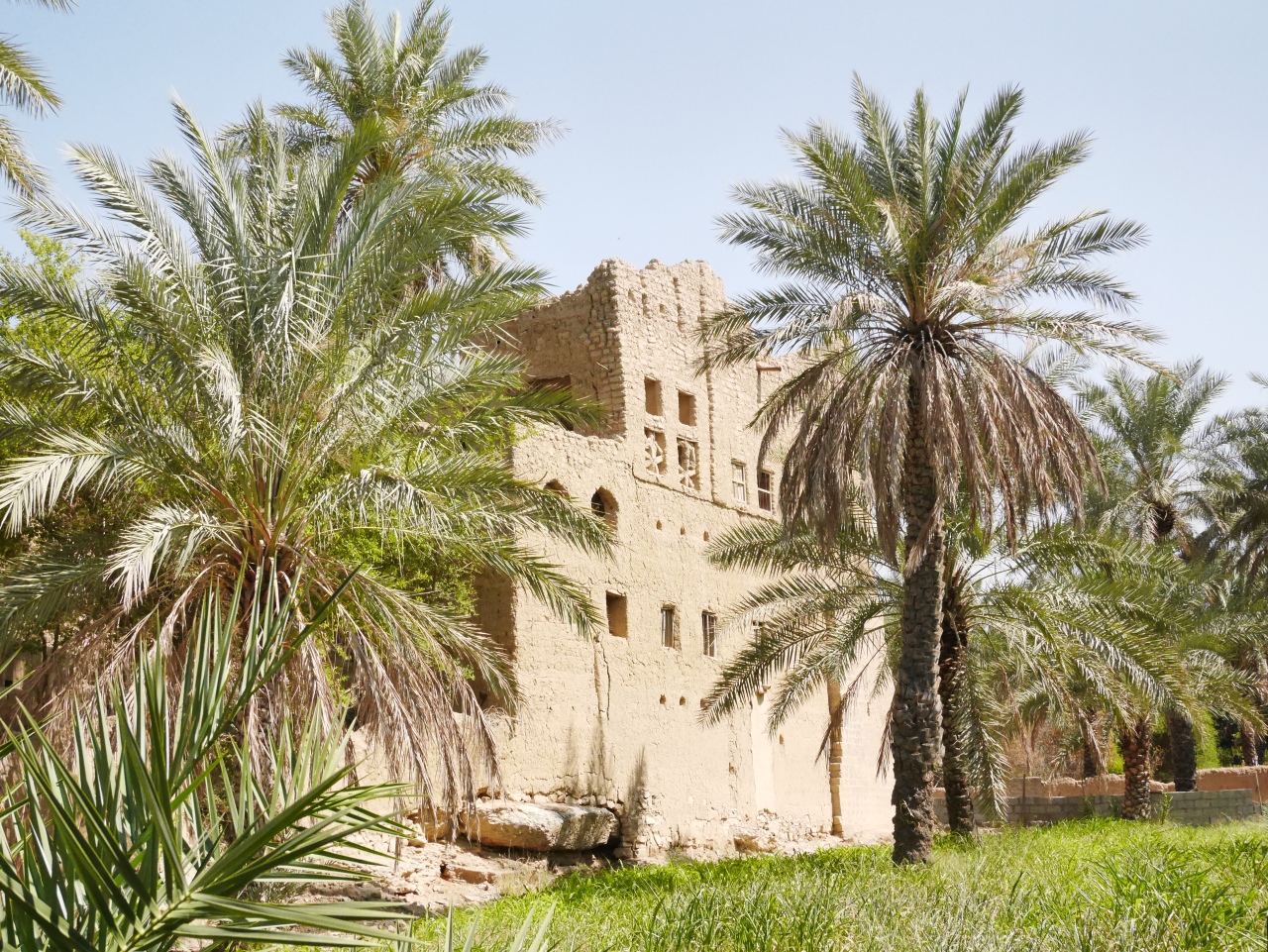 We found out later that only about seven families still live here. One building is now a museum. The guidebook said it had been a house of Sufi women who lived like nuns. It was just as it would have been when it was built three hundred years ago; plain mud walls, rugs on the floors and beautifully painted roof beams. 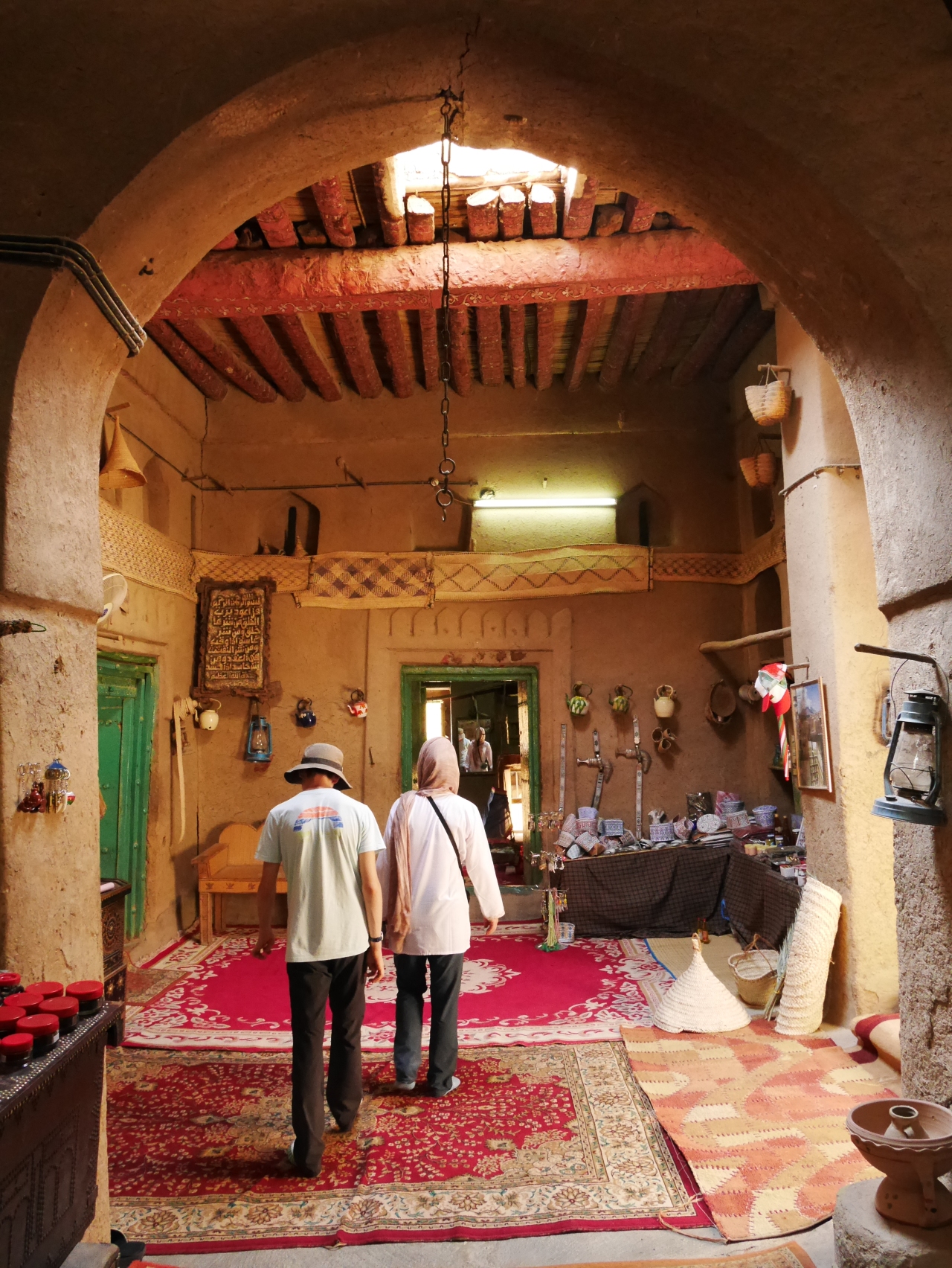 A young Omani man in a brown dishdasha and smart white cap showed us around. He said it had been home to several families (presumably after the Sufi women had left) and in one large room there were two women demonstrating some of the Omani traditions.

There were a couple of fires going on the floor, smoke drifting out through open spaces in the roof. One woman smeared dough over an iron hot plate. To make thin chipatis for us. Another roasted coffee in a long handled ladle. She ground it in another metal pot with a flat ended spike, rhythmically pounding it and tipping the cup so that it chimed in the floor. Our guide said that was how it was always ground and if you heard it from the street you knew they were making coffee. They squeezed oil from a seed paste which we dipped our fingers in and rubbed into our hands.

Philippa ground some wheat in a stone mill wheel and had a paste of saffron and sandalwood smeared in her forehead to cool her down. It was like looking back into another world. 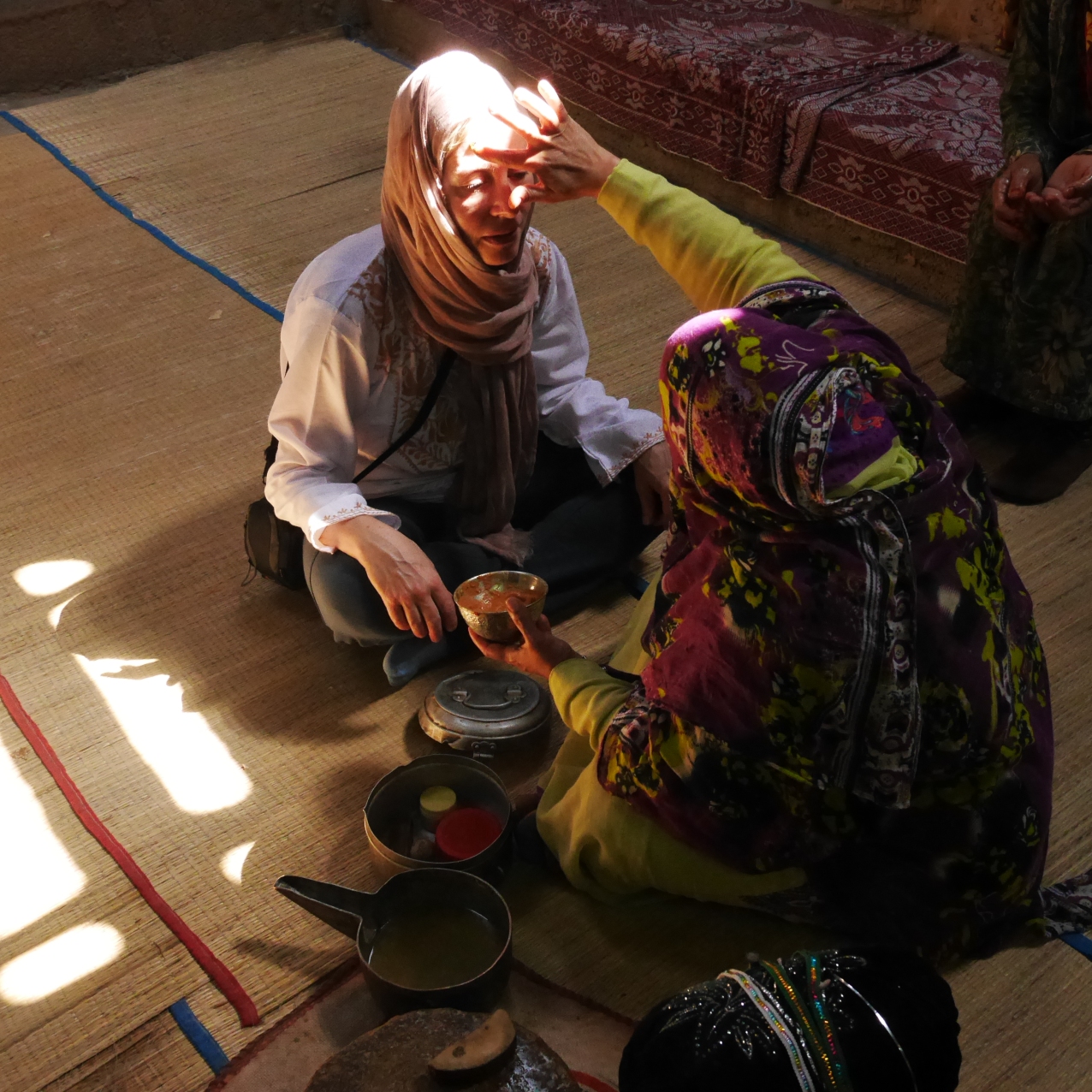 Afterwards we sat on the floor of the sitting room with rugs and cushions, drinking Omani coffee and delicious sweet ginger tea and nibbling dates. Our guide sat with us and we were joined by another young Omani for a fascinating conversation about the village and Omani life.

They were very sad that the old village had fallen into disrepair and liked the fact that on the whole, Oman had tried very hard to maintain its cultural traditions. They said Kuwait had used its oil money to level its old buildings and build new ones and now was beginning to regret having lost so much of its heritage. Sitting in this lovely simple room with the breeze coming through the little windows, looking out across the date plantation it felt like a Oman has a lot to savour. In ten years though, old Al Hamra will either be a restored world heritage site or it will have crumbled to dust. 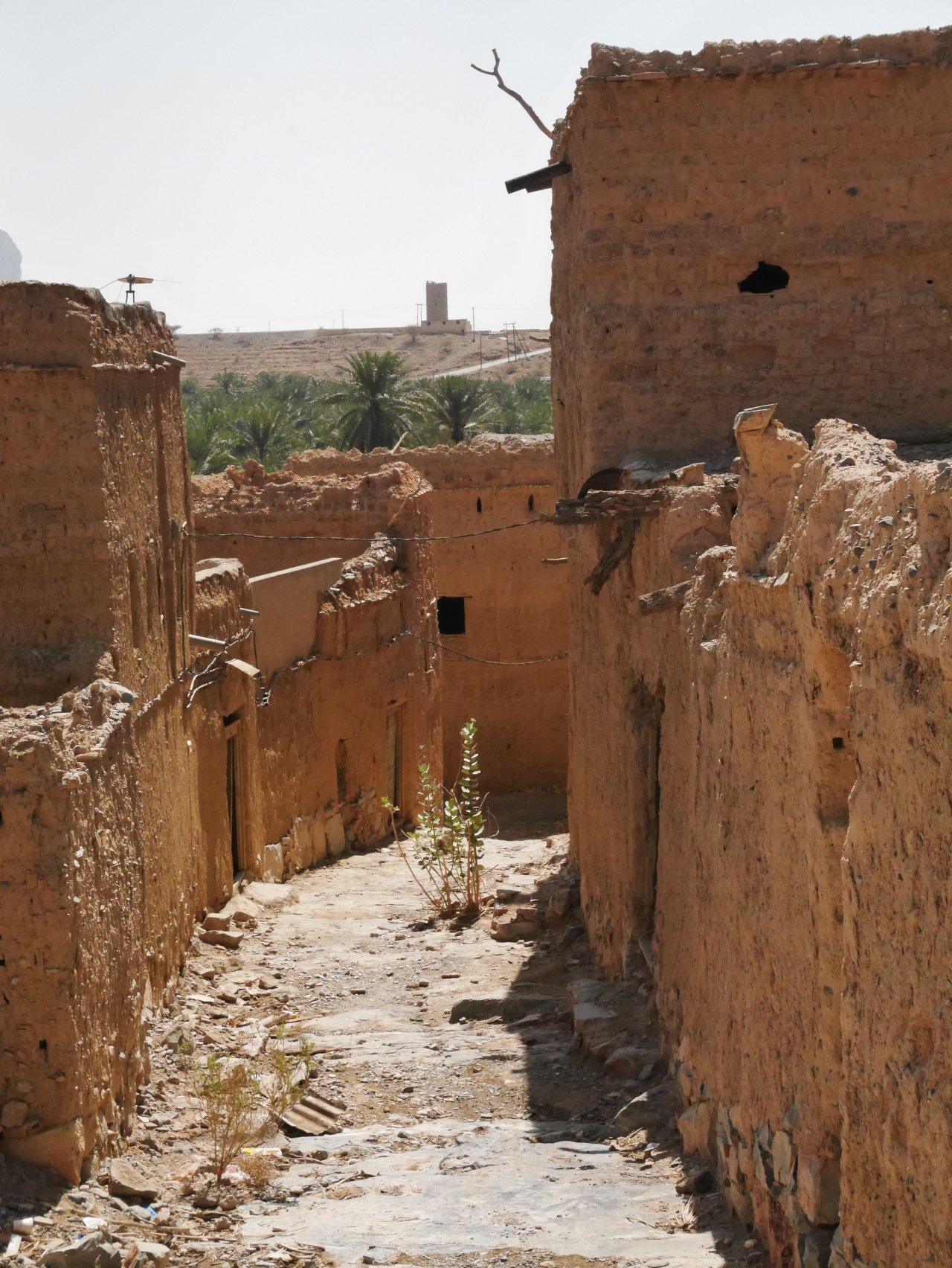 We spent so long at the house that it was now early afternoon and we still,had a fair way to go to get to our intended destination for the day, the beehive tombs at Al Ayn. We left Al Hamra, past the ghostly deserted village of Ghul (which, apparently is the origin of our word “ghoul”) and then onto a dirt road through the mountains. 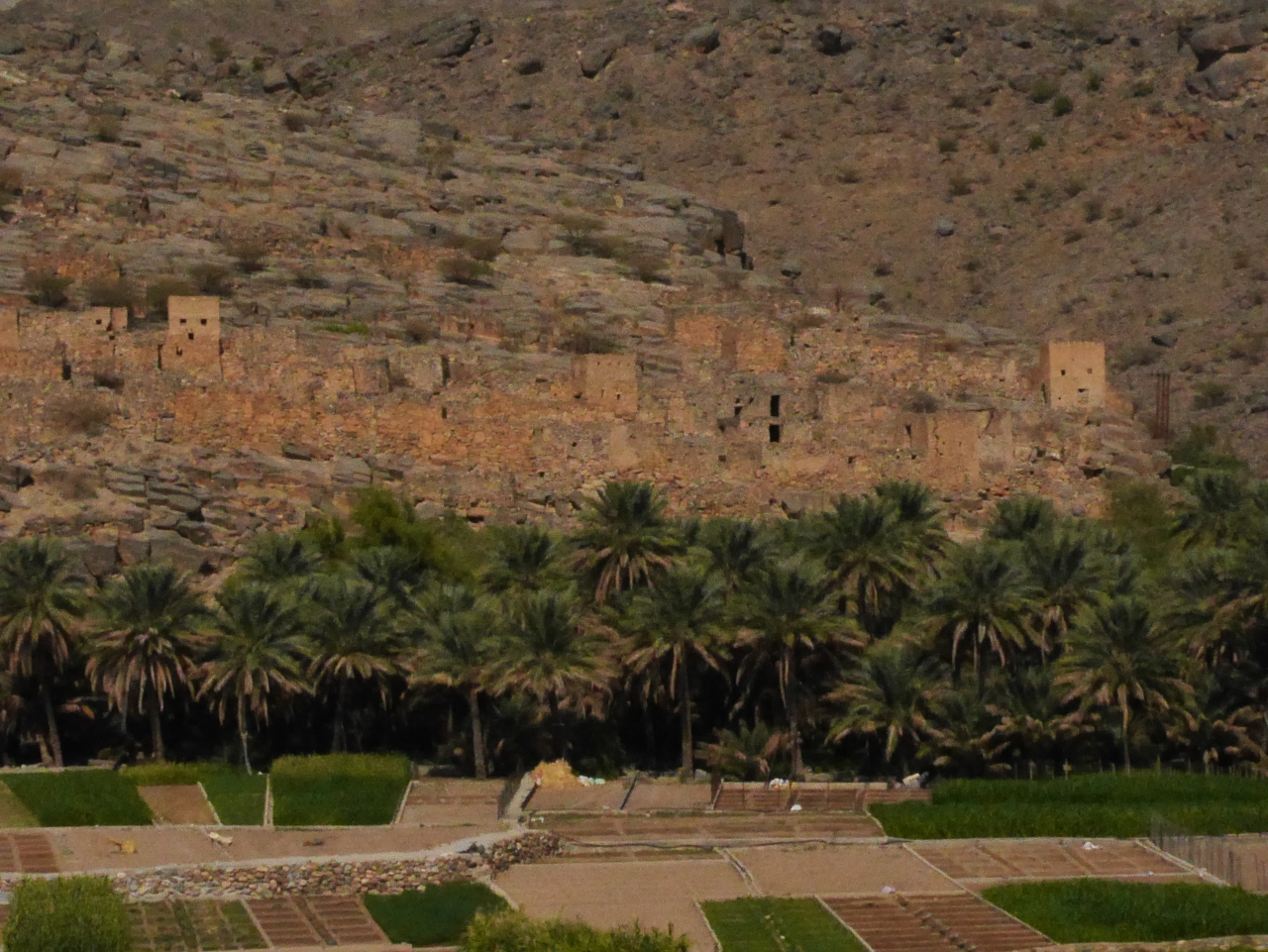 We found a shady spot beneath a tree for a picnic and realised we didn’t really have time to get to the tombs and find a good place to camp. So we made for the camping spot I’d found on The iOverlander app (thanks Sam for setting that up) which lists places that overlanders have wild-camped. It’s down a long dirt track next to a river in a small gorge. When we got to the track a sign said “Road closed”. Ah, but we found a way around the bit with roadworks and eventually got to the spot marked in the gps. It’s a mostly level stony plateau near the edge of the little gorge. There’s another pair of campers here but it’s very secluded and peaceful. We put up the new tent – for the first time in fact – lit the new wood stove, heated our supper, had tinned fruit for pudding and cups of hot chocolate. A feast!

Crickets are cricketing and the faint song of a muezzin is drifted up from the village about three kilometres away. There is a sliver of moon and we are watching the stars come out. It couldn’t be more peaceful.