A day by the river

Tomorrow we head for Epupa Falls about three hours away further downstream. There is a riverside track but it takes seven hours to drive, so I think we will take the easy route inland. Peter (the lodge owner) says the government has decided to grade the track to Epupa, which he discovered only when he was chatting to a group of surveyors staying at the lodge. He is clearly dismayed at the prospect as it brings this place closer to the rest of the world and makes it more easily accessible, which is not really the point. He said it would also limit the appeal to off-road vehicle owners who like to drive the whole trail and stop at the lodge en-route.  After Epupa we head south, deep into Kaokoland and the most inhospitable and isolated section of this trip. I filled our large plastic barrel with drinking water and checked all the tyre pressures. I’ve scratched my head over how to fill that second fuel tank but can’t see a way to access the fuel vent so we will fill up the main tank in Opuwo which should do us as we head into the empty northwest. I also swept out the layers of dust from the back of the Hilux; white talcum from the roads of Etosha and red from the area around Kunene.

The first thing we did this morning though was walk along the river for an hour or so, looking for invisible crocodiles. They are there, but they are very difficult to see and we didn’t. I did see a big monitor lizard on the bank which decided it would prefer to get into the water.

I collected another palm nut from a small grove and, with much use of my Swiss army knife, I broke through the shell to find the desert ivory inside. It looks like a smooth little onion and I am pondering whether to try to carve it into something else. A shallot perhaps.

We stopped at a little set of rapids in what was clearly the heart of the local monkey community. They all skittered off when we arrived and spent much time creeping about in the trees above us trying to work out what we were up to. Small white faces nodding at us through the branches.

The heat was building and we turned back for an afternoon of reading and writing and swimming and general laziness.
At 4.30 we went to the jetty for the “sundowner cruise” having ordered our gins, tonics and “Minute Maid Mango” in advance. Peter fired up the engines on the flatboat and we puttered up the river. The level of the Kunene is set to a remarkable extent by the hydro-electric plant further upstream. When it runs its turbines at 700 tons of water a minute, the water level downstream rises by perhaps a couple of feet. But when – during three day holiday weekends for example – they run it hardly at all, very little water gets through. Then, Peter finds he can’t get the boat up river for the sundowner cruises, and the white water rafting gets much more limited. That night there was juuust enough “by a few centimeters” said Peter, to do the cruise. And it was one of the highlights of the week.

Almost immediately we saw crocs basking on the shore, just a few feet from the boat. They watched us; green, unblinking and sinister.

Then came a fish eagle watching a heron in the water below.

Apparently they wait until the heron catches something and then go and nick it off them. Hardly the image one has of a mighty “Fish Eagle”, which gives the impression of standing alert and fearless at the water’s edge waiting for its perfectly timed moment to swoop in and catch a gasping salmon half its own body weight. This one is more of a heron mugger.

The bird life though is astonishing and we saw brilliant coloured kingfishers and bee eaters and a stone coloured duck that only gave itself away by opening an eye, so comprehensive was its camouflage. 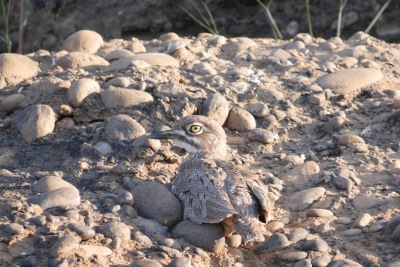 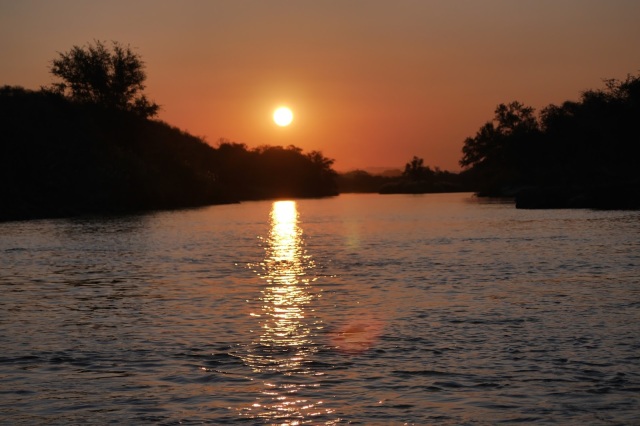 As the sun began to set we climbed onto the Angolan shore and marveled at the burning orange sky, ice tinkling in our drinks and feet in warm sand.