Well, almost Angola anyway. It’s across the river from us as I write at the Kunene River Lodge listening to crickets cricketing and monkeys rustling in the trees and birds making whooping noises we haven’t heard before. Kunene is lush and mountainous; quite a change from the baking flatlands we’ve become used to over the past few days, and very different to where we began the day.

Early this morning in the pre-dawn gloom a lion was making a heck of a racket just outside the camp’s electric fence. It is an extraordinary noise, nothing like the classic Metro-Goldwyn-Meyer roar, more of a mournful groaning sound.

We heard them several times in the night and P and I walked out to the waterhole to watch the sun come up and see if we could see any.

There was a lone jackal having a wary drink and after fifteen minutes in which our hot chocolate failed to warm us up, we walked back to start breakfast. It was bitterly cold and the rising sun took a while to take the edge off it. Bacon, eggs and mushrooms certainly helped though and by the time we had packed everything away the dry air was warm again and the sun was hot on our backs. It was a terrific little campsite, on the site of a former elephant mortuary set up during a drought when they had to cull some elephants to enable the rest to survive. A large, rather menacing gantry was still in place.

So this was day two of our big drives – about 360KM up through the center of the country to the Angolan border. We spent an hour getting out of the park with scattered game here and there but not enough to stop for.

It’s funny how picky you get; “Oh another giraffe”. You have to remind yourself that its a REAL LIVE GIRAFFE, RIGHT THERE! The gravel road became rocky and some “Staff Only” signs had us going around in circles for a bit, but eventually we saw the tower marking the Galton Gate entrance with a bevvy of people ready to spray our wheels against foot and mouth disease. We were only the third people to drive through that morning.

Once through the Galton Gate, the scenery changed instantly. The flat open expanses became rolling hills and the dirt road was replaced by smooth tarmac. It felt like we were floating. There was a police border post where a young woman fixed her blue hat straight and asked for my drivers license before lifting a barrier to a dead straight highway. The satnav’s only advice was that we had to turn left in 258KM.

The communities we passed were tiny places with maybe a shebeen or a general store and a few shoebox houses with tin roofs. We stopped at one store next to a bar hoping to buy a cold drink or bread but the racks of shelves had only a handful of items; cooking oil, tinned tuna, rice.
Goats and cattle grazed by the road; their herders giving us a lazy one armed wave as we passed. We had to slow down frequently to let them cross. A sign warned of elephants but the miles rolled on uneventfully, wheels singing on hot black tarmac, mirages chasing the horizon in the distance. We listened to more of Ray Bradbury’s Martians. The further north we got the less traffic we saw. Initially there was a car every twenty minutes or so, but when we stopped for lunch at a roadside picnic place, nothing passed us in either direction for the whole time. Major roads in Namibia have these “Shade Trees” every ten KM or so; a white and green painted concrete table and benches under a tree with a waste bin. They are always immaculate with not a scrap of litter.

We got back onto the deserted tarmac and began to pass small circular wooden stockades enclosing single-room, round mud houses with conical thatched roofs. One thatched roof housed a motorbike. Eventually we reached Raucana, or at least we thought we did. On the map it was the blink-and-you’ll-miss-it row of shanty shops we zipped by, but then at the junction (where we turned left) it said Raucana was 20k further on down the road. But the satnav said the Puma fuel station in Raucana was a left turn a few hundred yards further on. We took Mrs Garmin’s advice and headed for the fuel station  which was a very professional affair where we got cold drinks and again tried filling up the second tank.  Again, there is a bit in there, but it won’t last us 1200k. I have to have another look at the map but I think we should be able to drive through the off-the-grid wilderness that is Kaokoland with the fuel we have. We will find out I suppose…
Raucana is only really a place because it has a hydroelectric plant situated very close to some spectacular waterfalls. At least they used to be spectacular until the arrival of the hydroelectric plant, and now they are more of a cliff. There is a viewing point for the “falls” just the other side of the Angolan border, so we drove up there just for the heck of it, following the “Raucana Falls” sign. We stopped at the barrier and asked the lady army officer if we could zip over and have a look and she was distinctly unimpressed. “There is no water” she said with a sigh “nothing to see”. With my best border-post smile I said we knew that but we had come this far, perhaps we could have a look at the view. Her much friendlier assistant was already beckoning us over to the foot and mouth disinfectant mat, but she repeated there was nothing to see and it was all pointless and her tone said she couldn’t be bothered to lift the barrier for us. So rather than press the point that we REALLY wanted to see the view of the falls which were no longer there, we bid her farewell and drove on.

A few K past Raucana we cut through a slot in the mountains and had an amazing view across to Angola with the silvery Kunene River snaking off into the distance. In Angola it’s called the Cunene River. A few K after that the road ran out and became a steep and bumpy 4×4 track which dipped and rose, sidling up to the river before angling off back into the hills.

We darted back and forth like this until the track stuck to the river and took us through some Himba settlements, As Philippa noted, it was like driving through the dioramas at the Natural History Museum, with a cluster of nearly naked Himba women working at something in front of their hut, giving us a big smile and a wave. Some of the little boys held their hands out to us wanting something, anything, knowing from past experience that some (misguided) tourists will throw sweets.

The sandy track crossed little streams in places and it took us about 90 minutes of this off-road driving before we got to the lodge, all of us feeling slightly spaced out by our very long day. Its a nice place, unpretentious and with a slight fifties motel feel to our “deluxe bush chalet”. The owners, by their own admission are not here to make a ton of money, but fund their existence in this beautiful and largely unspoilt bit of the planet. Andrew is originally from Kenya and Hillary from Sussex where they both lived before coming out here and setting up this lodge more than a decade ago. There are crocodiles in the river and there used to be a very few hippo, but Andrew thinks last summer’s severe drought finished them off (as there was not enough for them to graze). 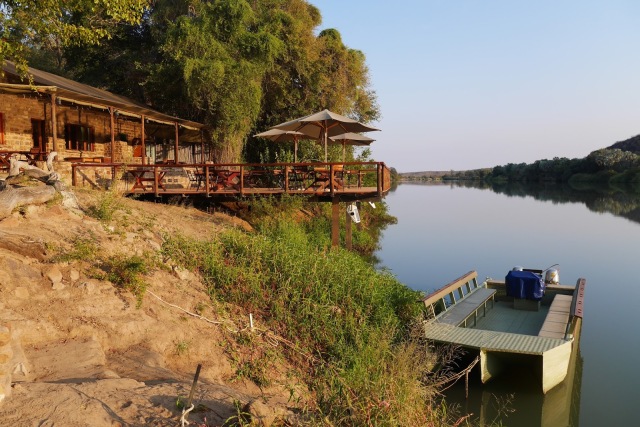 The birds though are a treat. Almost three hundred varieties including one only found on this particular stretch of the river. We ate on a deck over the water which slipped glassily past. By 9, we were all deeply asleep.