By Richard ListerAugust 19, 2013
So today was to be all about Trondheim, but it was so wet and dismal outside this morning that P and I both wondered whether we shouldn’t just press on. That became the plan…right up until the point when it stopped raining and we stiffened our resolve and made for the bus stop.

We were about fourteen kilometers outside the city but the polite, helpful, English-speaking driver (natch) told us which was the stop we needed and half an hour later, there we were.

Trondheim is an attractive, low rise city set back from a working harbour with many of its old buildings still intact. The city centre is on an island, with a large central square dominated by a statue of the Viking King, Olav, who for some reason was wearing a red hat, and looking none to chuffed about it. 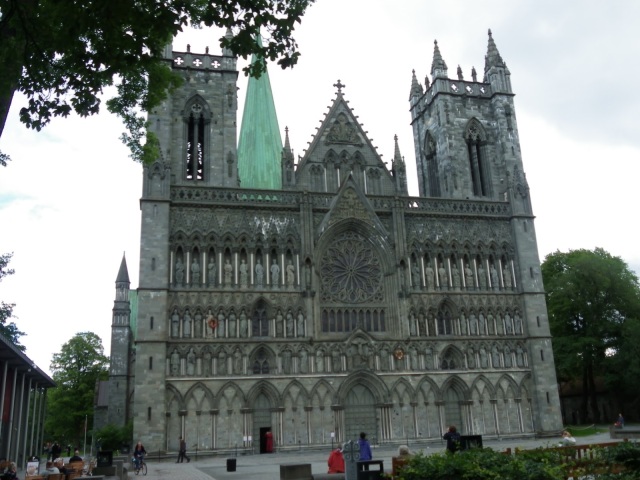 A short walk away is the imposing cathedral and we got tickets to go up the tower after an absolutely superb talk from a young docent.  He spoke with an  impeccable English accent  (“its from watching too much English TV”) and told the stories of the cathedral and its saint in a way which had even our ten year old spellbound. At the heart of his story was Olav the Viking (b. 995) who raided far and wide – from Finland to Ireland – before converting to Christianity, becoming King of Norway and raising the ire of the population by banning many of the old Norse traditions. Eventually the people drove him out and when he came back from exile in England to reclaim his throne, he was killed in battle. But that’s when his fortunes began to improve. He was buried by the river and stories of miraculous healing began to be told about people who visited the site. He was exumed a year after his death and his hair and nails had grown and his body smelt of roses. He was declared a saint on the spot, interred in a silver casket and the cathedral was built around his shrine.

The cynical reader might suggest that maybe the Church saw a way to boost its position (at a time when Olav’s successor Knut was deeply unpopular), by generating a mystical buzz around Olav and creating a local saint to drum up trade. But we’ll have none of that talk here. In any event, Olav went from zero to hero in twelve months and as our docent said, without that there would have been no cathedral. It was paid for incidentally, by a ten percent tax on everyone who lived in the Bishopric of Trondheim, which extended from western Sweden and across Norway to the Shetlands, Orkney, Iceland, Greenland and the Isle of Man. Now THAT’S a tax base…

Oh and what of Olav and his silver casket?  The Danes nicked it in 1537 and melted it down, burying poor old Olav in a secret location. The cathedral though remains, and is utterly splendid. We climbed the 177 incredibly steep and narrow circular steps up to the roof and looked out over the city drying off in the weak sunshine. 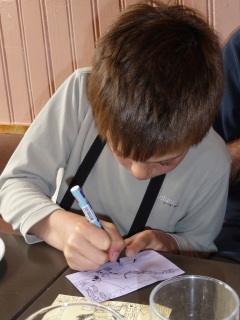 After climbing back down again we walked to the old wharf area with its pretty  timber framed houses, and huge old warehouses.

Its a gorgeous place to wander through and we found lunch in an old coach house – the Baklandet Skydsstation where the walls, floor and ceilings were all at such divergent angles that it was hard to see how the place stayed together. It was full of all kinds of knick knacks appropriate to the age of the building including period clothes, socks and shirts hanging over the stove to dry. The food was exceptionally good; I succumbed to the lure of reindeer stew again. On the back of our cathedral tickets, Tom drew a terrific little sketch of an imagined city with everything that was going on above and below it. It was such a nice, civilised lunchtime in a cafe that was absolutely of its place.

After a bit more walking we caught the bus back to our campsite and it was hugely delayed by roadworks. We decided to set off south again and tried to avoid the roadworks by going cross country over a hair-raising dirt road that took us to the back of the back of beyond, but eventually spat us out at the E6 south of Trondheim.

We didn’t plan to go far and after about 50k we followed a sign to a campsite. The road took us first over an ancient bridge that was being repaired, past an avalanche zone that had been cleaned up and through a town that seemd to be closing down. On the other side of it, the road split left down a single track road through a narrow tunnel with a dead end promised further on.

The road ran right next to the railway track and emptied out at the campsite which was just the other side of a railway bridge. It seemed full of rusting old caravans and was quite literally on the wrong side of the tracks; the railway bridge was  20cm too low for us to get through. We turned around, back through the tunnel, and onto the E6 again.

Half an hour down the road we found the delightful Gullvåg Camping on the banks of a river which also has so much wifi that we all watched Top Gear on BBC Redux. They have promised us fresh pastries at 9am tomorrow morning. 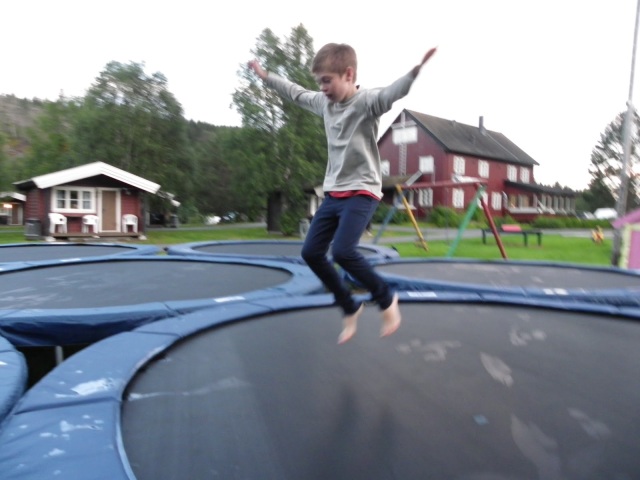 Tomorrow we hope to head back into the high mountains again and I really want to see a Musk Ox.

Sent from my iPad