We woke this morning to the sound of waves lapping on the breakwater and had breakfast as the rest of the village slept. During these long days no one goes to bed early it seems. We left our free campsite at the crack of just before nine and turned Thor south for the first time on this trip. The village appeared deserted as we headed back to the main road for the final leg of the scenic route around Senja to the ferry at Gryllefjord. 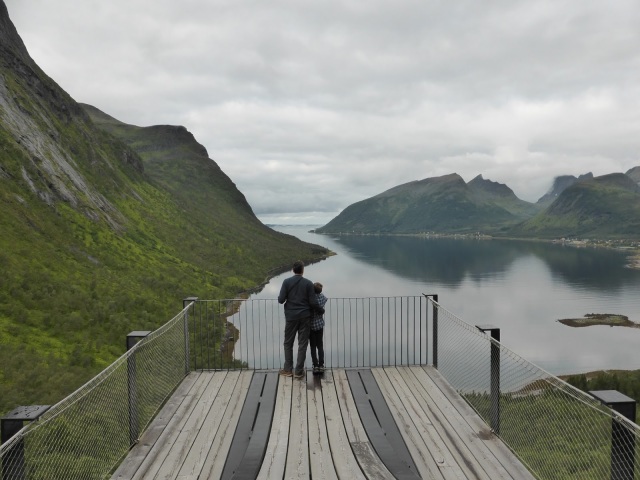 The cloud had lifted somewhat and here and there bolts of sunshine lit up a vivid green mountain side or speckled a patch of sea. The jagged mountains followed the road and long fingers of fjord pushed inland with clutches of red- painted houses at their tips.  In an hour and a half of driving we met just one other car on the road, until the ferry traffic appeared just outside Gryllefjord.

The small ferry was idling noisily at the terminal when we got there, the water a deep turquoise blue and as clear as glass. P and I nipped into the supermarket for milk and bread. I got a pack of rather good woollen socks, they being one of the many things I failed to bring (enough of) for myself. We dipped into a cafe for some takeaway coffee served by a smiling girl who was possibly Sami – or Japanese – and as friendly and helpful as everyone has been on this journey.

When we came out, the first of the cars were driving on and after paying the ferryman who appeared at the window, so did we. The trip to Andenes is about an hour and a half and we rolled sedately over the gentle swell, watching the movie-backdrop mountains across the water and looking for whales.

Andenes is a bustling place, mostly fishing-orientated but latterly it has made a name for itself as a whale watching centre. The sperm whale feeding grounds are a thirty minute boat ride away and we toyed with the idea, but the sky was now somewhat leaden and we have had good whale watching trips before so we decided to poke around the town a little instead. There is a small central shopping area with a busy bakery, and further out a tourist information centre with a young man who was anxious to help us with something, but none of us could think of what. There was a slightly odd museum in the building which had face-casts of many of the people who lived in Andenes in the 1990s, but which reminded me of a room full of death masks.

We went into a little restaurant by the water where Tom had fish and chips – crispy, moist and superb. P and I had some of the best soup I have ever had. It was the “fish stock soup of the day” with sliced chilies, peppers and lumps of cod in a tomatoey broth, served in a broad bowl with a gobbit of sour cream in the middle. Despite the fact that we were fairly sure it had some pieces of whalemeat in it too (dark brown cubes) it was delicious. Tom had a pancake with stewed lingonberries and blackberries for pudding and it too was so good, P and I couldn’t leave it alone. Its not cheap to eat out but whenever we have done it here its been memorably good.

And so southward down the west side of the island of Vesterålen, through little villages surrounded by low, grassy dunes. The character of this area is quite different from Senja’s drama. The mountains are further off and the road winds through flatlands that were once sea. We turned off at a little beach behind what looks like a (closed) community centre. The sun came out and we all ran up and down the white sand and climbed the rocks. It was so nice we decided to stay the night. There is a cold wind coming off the ocean now but outside our window the sun has begun the long, slow journey towards the horizon and we can hear the surf. Tom is curled up in “the best bed I’ve ever slept in” and P and I are watching long pink streaks form between the clouds.