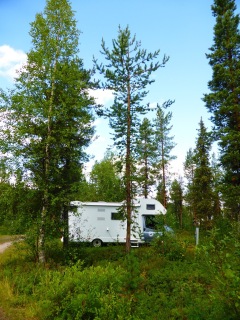 Tonight’s campsite? The Arctic Circle. Yes we are actually on it, and the owners of this little rest stop have helpfully marked it out in white boulders on both sides of the lake which the official signboard looks over. I know its only a technical division and somewhat shifty in that it moves about really rather a lot, but still its the Arctic Circle and we have driven to it. There is only one other van in this campsite, perhaps because from the road you can’t see that it actually is a campsite. P went exploring when we stopped for the inevitable photos and found a clutch of sites in between the trees.

As we were hooking up the lady host came up rather shyly and charged us a grand total of fourteen pounds for camping on the Arctic Circle, which comes complete with electrical hookup. She signed her name neatly on the souvenir receipt. Thank you Kristina Sundquist. The time is now 1045 pm and its still late dusk outside with a reddish glow in the sky and the first hint of thunder off in the distance. Its been a long day.

We woke to the sound of traffic on the road outside the car park where we spent the night but we’d all had a reasonable night’s sleep in the end. We had breakfast of boiled eggs, watching the joggers and dogwalkers on the pavement outside our window.

P had been determined to find the world class sculpture park that Umea has been keeping to itself and after two sets of directions from incredibly helpful and polite people at a petrol station we found it. Honestly all Swedish people seem to speak the most incredible English with diction that makes me feel slightly embarrassed about my own.

The sculpture park is in the grounds of a former mental hospital which is now used for something but we couldnt quite work out what – university accommodation perhaps. 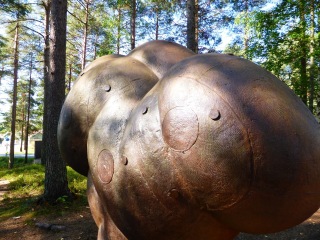 The sculptures are from some big names like Anthony Gormley and were all very well and good I thought, but none were particularly satisfying. Gormley’s was supposed to be something to do with movement and the human body, but we all agreed that it actually looked like a large pile of moose
poop.

And on that note, switches, hatches, steps, Tom, and we were off on the relentless route north.  After a couple of hours we came to Pitea Havsbad, one of the best known beach resorts on the Bothnian Coast. We stopped for lunch and a swim in the sea which is both surprisingly temperate and not the least bit salty. Its been so wonderfully sunny and warm that we all dried off in no time and went for ice-creams. I ordered a flavour i had never heard of and discovered that aniseed may be good for many things, but ice-cream is not among them. Tom looked vaguely offended after he’d had a taste.

Back to the road and at Pitea proper we turned left for the first time and joined the road to Jokkmok, capital of the Swedish Sami people. Now this was a road that felt like it was going to the Arctic. The trees seemed to grow smaller and the few cars coming the other way frequently had three big spotlights across the radiator grill as if they were being driven by Stig Blomquist in a World Rally championship. There was almost no-one heading north and for most of the trip we had had the road to ourselves. After an hour or so saw a river pass through the most enormous rapids on the other side of the road.

A hotel complex had been built at the bottom next to a nature reserve and we had supper on a bench watching the water pounding its way down the side of the hill. There was a path up along a series of boardwalks and we walked up with the spray in our faces. Loggers had contained the flow in the nineteenth century but in winter it still freezes up and forms a dam which forces the river to expand sideways through the forests either side. It was a really magical spot which appeared with no fanfare whatsoever. 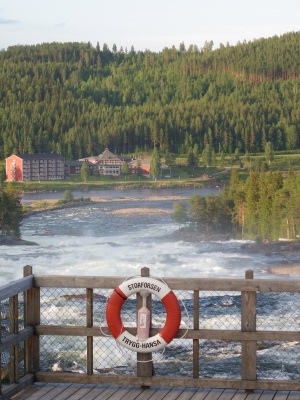 And on to Jokkmok, but not quite because we stumbled across this gem of a campsite and the town is another ten k ahead. The thunder is still growling away and the lightning is flickering behind the hills. Its half past eleven and still not really dark; the sunset is a deep crimson glow on the horizon.
Update at midnight: its still light out there…