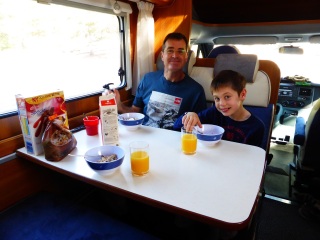 It was cooler when we woke this morning but within half an hour or so the sun was clearing the cloud and it soon settled into being another warm day. We set out for the coast walk we had seen mapped out on a sign at the beach yesterday and began by walking though the woods on springy pine-needled paths with scrubby trees and sunshine all around us. This part of the coast has been lifting since the end of the ice age, when the weight of ice was finally lifted. So in between the stands of trees what was once sea bed has been left as fields of stone, cast with a soft greenish blush from the lichen. Marooned for ever by the fickle nature of geology. 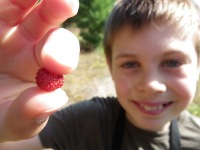 Birds flitted, butterflies flickered and the sun made our necks sizzle as we walked along the rocky coast. Its an enchanting place – like walking through Narnia. Every now and then there are sturdy bench-tables for picnics but the parks service has a very low key approach with minimal signage. Swedes, it seems, don’t need to be told not to drop litter or light fires. Its obvious. 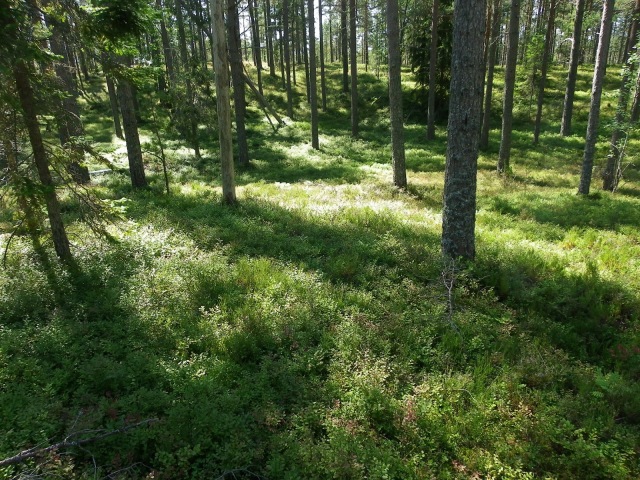 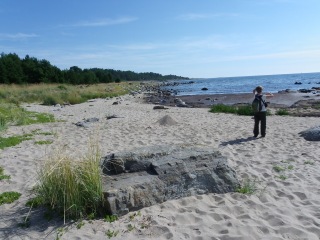 Eventually we came to the rounded tip of the headland, where Tom was all for swimming. He got into his trunks and got ankle deep into the water where his shoulders immediately lifted and he did that futile attempt to hover back out of it, that we all try and fail to do when entering something freezing. It was more a basking on a rock kind of morning, so that is what we did.

Back at the campsite, the Volvo convention had mostly scattered and seemed to be heading south, because there was again little traffic heading north. If there was a prize for “least aggressive driver” Sweden would definitely win it. Actually, I suppose there is a prize and it is Sweden.They stick fairly closely to the speed limit and they give way even when they don’t really need to and they don’t overtake unless it’s clear to all concerned that they are not being aggressive, just trying to get past – hope you dont mind. They also seem to have an ongoing love affair with vintage American cars. We have seen dozens of them in full fifties and sixties gloriousness, all shouty fins and flashing chrome with driver and passenger looking tickled to be there. There is also, I have discovered – late – a camper’s salute. I noticed a man give me a slow wave as he passed and realised that they must all have been doing it and I hadn’t noticed. Sure enough, the driver of the next camper we saw did the same and this time I was ready and raised my arm too. A dignified exchange of greeting between serious travellers.  It seems we don’t salute caravan drivers though. Oh no. 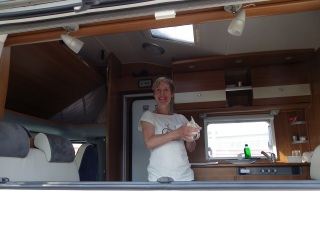 Sundsvall had been the signboard destination since we began our trek and it appeared in a waft of smoke and smell some kind of paper plant. It is surrounded by industry, but the old town in the centre on the keyside is a handsome stone monument to industrialistation and the perils of building in wood. The former town burnt to the ground in 1888 thanks to a spark from a passing steamboat. We pulled into a deserted car park at a failed furniture showroom across the water from the town, and had lunch watching small boats bobbing about.

This was where Tom was given the new Lego kit, that he had been coveting with one hundred percent of his entire being since he first spotted one on the American lego website. Greg and Margo had carefully carried it all the way with them when they came to stay a month ago and it has been concealed ever since. Oh the delight. Oh the joy. We lost Tom for the rest of the afternoon to the clickety clackity world of a new kit. 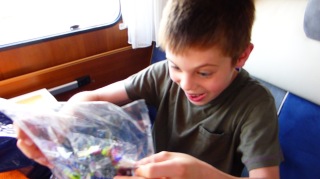 On the road to Umea the surrounding trees seemed to change subtly. There were fewer forested stands of pine and fir, and more of a tangle of old growth with plenty of white-trunked birch trees. We were heading for a campsite on the outskirts of town but when we got there it looked packed and unappealing from the road. So we formed a cunning plan that we would spend the night in the car park of the world famous sculpture park a couple of K outside the city. Well the park is so famous apparently that it requires no road signs whatsoever and we never did find it. 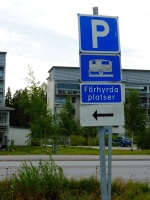 Circling gloomily around the campsite again we passed a large and mostly empty caravan car park which was associated with a housing development. We parked there for the night, and although I was sure the passing traffic was going to keep us awake in fact the  zzzzzzzzzzzzzzzz