Philippa and I snuck out into the dark last night and craned our necks skywards looking for meteors. The sky was cold, clear and sparkling and it took a while but we both saw flashes of light shooting towards the horizon.  Tom has a bit of a thing about meteorites and believes that at any moment we could all be wiped out by one. He is right of course, but its hard to explain to a seven year old that its not really worth worrying about. He was deeply asleep by the time the Perseids appeared, and I don’t know whether they would have eased his fears or fanned them.

It was chilly when we got up for the ferry this morning and I turned on the heating while we staggered about yawning. We threw on some clothes, drove 3 miles to the ferry terminal, got boarding passes, got in line and had breakfast in the GMC. So civilised.

It seemed to be mostly holiday traffic; several RVs, a few trucks and a lot of Harleys with owners wearing Harley Owner’s Club regalia from Maine. Nearly all seemed to be in their fifties, dressed up as rebels from the fifties. Its a three hour crossing to Saint John, New Brunswick in the Princess of Acadia which is a pretty sizeable ferry, able to carry 650 passengers and 155 cars. It also has a Starbucks, the first we have seen in weeks. Its been so nice to be in places overlooked by the Starbucks megalomania. That said, we both had lattes. 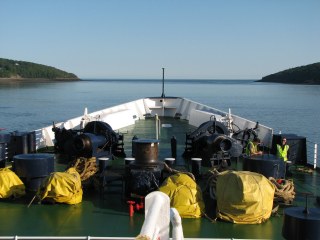 On deck it was sunny but freezing so we retired inside. There was free wifi for blogging, a Shrek movie on a big screen for Tom and a nice quiet crossing was had by all.

From a distance, Saint John appears to be under siege from industrialisation. It is surrounded by oil refineries and gravel processing plants and some kind of factory with giant chimneys belching grey smoke. I’m sure it has its lovely bits but we decided to press on down Route 1 on the coast. It felt a little alarming to be driving fast on a big highway after all this time pottering about.

We turned off at New River Beach, a provincial park of the type the Canadians are so good at. There was plenty of parking and toilets and a little cafe and a great big swathe of beach. When we got there the tide was so far out you could barely see it. We had lunch at a picnic table and when we went back to sit on the sand for a bit the water was already in. The beach was so shallow the tide must have raced across it. Tom did his usual civil engineering projects with a bucket and spade, and soon had a large sand-hole to sit in as the waves came further up the beach, carrying a thick mat of bladderwrack seaweed with it. Tom sat in his hole popping the air bladders as they were washed up to him. That’s what you do when you are seven.

A little scorched we pressed on with sea on one side of us and fir and pine woods on the other. An hour later we went south to sparkling St Andrews a touristy little place with a wide harbour. The main street is all brightly painted wood-framed shops and galleries with shingle roofs. We got an “overflow” site at the big campsite by the bay and cycled back in for supper on a sunny terrace overlooking the water. We cycled back through the streets of the main strip and found (again) a plethora of churches. There were three on one block each separated by a single house.

Its our last night in Canada. Tomorrow we will try out Philippa’s new visa at the border and make our way to Acadia National Park in Maine. O Canada, you have been great. Lovely landscapes and terrific people. Can I stay?