This was not a day to seize, more of a day to slide into. And that is what we did. A late breakfast outside, a bit of trampolining for Tom at the playground, a bit of tidying up and then a cheery farewell from Gloria and Vaughn and off we went to find out what we were going to do today. Whale Cove was a smashing little place with a great campground and we were sad to leave. I think we could have spent half our trip on Digby neck. 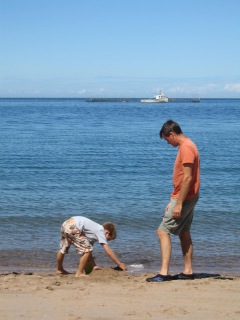 Just a few miles down the road was Sandy Cove, named of course after its burgeoning industrial belt and international airport. Or maybe it was the beautiful “sandy cove” with almost no-one on it, down a winding lane which petered out at an elderly jetty. We made for the beach with camp chairs and books and a bucket and spade and that was the day sorted.

The next few hours were taken up with sandcastle construction, reading, dozing, eating hamburgers for lunch made by Dad, more sandcastles, more reading and well, you get the idea. We all had too much sun and the sea was too cold to swim in but looked lovely.

The cove had one curious incident in its history. Sometime in the mid nineteenth century (accounts vary but between 1854 and 1866) a man in his twenties was found lying by the only rock in the sands (which is still there). Both his legs had been recently amputated above the knee, and were bandaged up. Beside him was a jug of water and a loaf of bread. He was taken in by various people in the surrounding villages and he lived there until 1912 without ever explaining who he was, where he had come from or what had happened to his legs. In fact he remained almost completely silent for the next sixty years. Early on he was thought to have suggested his name was Jerome and that he may have been from Trieste, but no-one ever really knew for sure. The best account I found of this mystery is here. It was rather eerie to look across to the rock and think about the story on such a sunny and carefree day.

Eventually we ambled back to Harv and got back on the main road along the Neck, headed for Digby. “How is Harvey these days?” I hear you ask. Driving better than ever in fact, thanks to his own spot of surgery, smooth and stable. On Paul’s advice in Halifax I switched to regular unleaded (from plus) and noticed no difference in power at all. We have had more questions about our GMC here in Nova Scotia than anywhere else, at petrol stations, campsites and on ferries people want to know about Harv. At the campsite in Digby the owner got us squared away and then said “that’s quite a rig you got there…” and asked the usual questions. Its so nice to drive in something that everyone smiles at.

We walked into the Digby harbourfront. Its a fairly plain little town with a handful of restaurants and what looks like a busy harbour. We had a plain little supper enlivened by the presence of a little cat, a stray rescued by the restaurant owner and getting used to people. The waitress said it wouldn’t let anyone pick it up, but it hopped up on me and went to sleep.

We walked back to the campground in the glow of the early evening. Tomorrow we have to be in the ferry line at 7am, at the end of the road about three miles away. A text message from my Mother says tonight is a good time to see meteor showers (the Perseids says Mr Google). A natural firework display to mark the end of a spectacular time in Nova Scotia.