With the blinds down and a grey morning we all slept in after a terrific rainstorm overnight.  Our little patch of Adirondak was completely sodden so Tom volunteered to make scrambled eggs.

He broke them all himself, beat them and cooked them, and was very proud. Once again it didn’t seem to be the kind of day for a walk sadly, so we went off to the little town of Saranac Lake which the guide books all rave about. It is rather nice, with a handsome red-brick bell tower on the main street, and a jumble of shops running either side of it. We did our usual circuit looking for somewhere to park (which is not something you can take for granted with a 26 foot vehicle) and then went to find a post office for PT, a barber for me, a bookshop for our seven year old bookworm and a lunch spot for all of us. Saranac Lake had it all, though not necessarily in that order.

The town made its name as a place for people who had TB to come and take the air. Its full of houses with deep porches to accommodate consumptive types, wrapped in quilts and sucking in great lungfulls of the good stuff. There are about a hundred and seventy such houses on the National Historic Register in Saranac Lake. We had lunch at the Blue Moon Cafe which had a good menu and that slightly offhand service that we have got used to. Our unsmiling waitress couldn’t wait to give us the cheque and when we asked someone else if we could get some coffee he said we could get it from the front ourselves. When we got there and asked for lattes he said “well why didn’t you say so before”. Ah well. We did use their wi-fi to catch up with the blogs and their electricity to recharge the laptops so we didn’t do too badly. I took Tom off to one of the two bookstores and he interrogated the owner as to the books he wanted. I found him on the other side of the counter telling the owner what to click on his computer as he searched his database. The guy was amused and we left with a book.

I got my hair cut at a salon on Main Street by a young lady who lived in nearby Tupper Lake. She liked the quiet of the Adirondaks, but not the winters and she was full of questions about our trip and how our journey compared to travelling around Britain. Both PT and I have noticed how much this area is like the Lake District – if a little wilder, but the context is very different. The Lake District always feels like a little piece of England and this region feels enormous – almost a country in itself. It was a nice chat and a realised it was the first proper conversation I’d had with a local person here. The haircut was twenty dollars. 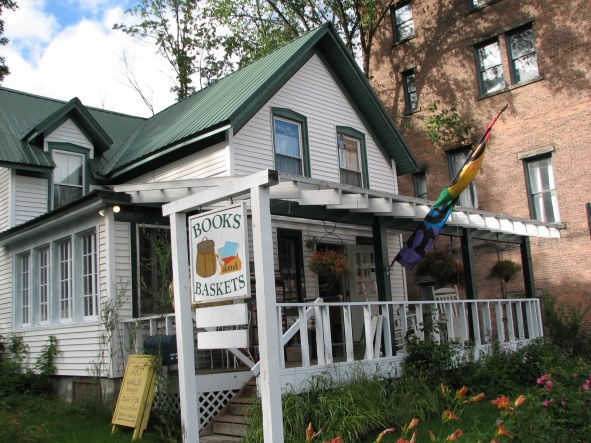 Our last stop was another bookshop – this time, the downstairs of someone’s house stacked floor to ceiling with secondhand copies of everything you could imagine. Tom launched straight in with the inventory questions “Its called Missile Mouse I have the first book but not the second and that’s the one I want and if not I am looking for Amulet book three I have Amulet book one and Amulet book two so its three I need do you have it, the author’s initials are K K but I am not sure about the name do you have it?” The lady behind the counter deciphered enough of Tom’s machine gun delivery to say unfortunately she didn’t, but he found a couple of other books so all was well. The owner was an interesting lady; she made baskets and her husband made boats. They had both just come back from cycling most of the route we intend to take up north. She span her computer screen round so we could see some of her pictures. It looks like the Gaspe Peninsula and Cape Breton are fairly wild and empty places, with some big views and lots of moose. I tried not to look at all the photos as I still want to be surprised by where we go.

The rain was pouring outside but by the time we had finished chatting it had cleared up and for the first time all day there were big patches of crisp blue sky, and puffy white clouds. We drove back to the campsite with shafts of brilliant sunlight cutting through the trees beside us and lakes flashing blue as we passed.