“Adirondaks”, I told Philippa knowledgeably earlier today, means “Bark Eaters”. The Iroquois used to come to these mountains in the summer and head back south when winter came. They called those who stayed here for the winter “Adirondaks” because there is so little food to be had over the harsh winters. I can well believe that winters are cold because today was June 30th, and it was absolutely freezing. A bitter wind has been blowing through us all day and though the sun has been out, it hasn’t taken the edge off it. We were all chilly in the night and I had to turn on Harvey’s heating system; an industrial hot air blower that sounds like a small jet taking off. (Regular readers will be mightily relieved to learn that the new thermostat works just fine)

Its been a fun day though. Given the weather, we headed up to the wonderful Adirondaks museum just north of Blue Mountain Lake. Its a collection of buildings in the traditional low wooden style, each with different displays and artifacts relating to life in the Adirondaks. One is given over to the lumber industry, with ancient sleds used for hauling logs, giant axes, steel toed boots and tales of life in the raucus lumber camps. There is an old schoolhouse, a quilt collection, a hunting lodge, a fishing camp and collections of vehicles, from a small steamship, to a sled-hearse. 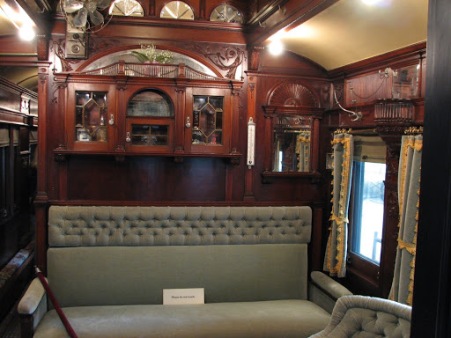 Another building houses a magnifient Pullman rail car built for a New York banker to travel to his summer camp in the mountains. It was fitted out with rich wood panelling, cut glass and velvet upholstery. There was a stainless steel  kitchen, a bathroom with an enamel shower, sumptuous bedrooms a grand dining room, bookcases, drinks cabinets and crystal light fittings. It was the private jet of its day and would be hitched to the back of any train that happened to be going wherever the industrialist wanted to be. The docent’s eyes lit up as he told us about the days of the Whitneys and the Morgans visiting their great camps, and the railroad cars lined up in sheds waiting to take them back to New York.

There was also a great exhibition about a “hermit”, Noah John Rondeau who lived on his own in the mountains for more than three decades; going to the nearest town no more than once or twice a year. Someone had made a film about him which played out silently in crackly black and white next to his cabin which had been saved for posterity. He was skinny as a rake with owl glasses and a big beard. He clearly loved people and his eyes lit up when he was filmed talking to a young woman. At one point in the film he was given a baby to hold and he danced a little jig with the baby on his arm, grinning from ear to ear. It was rather poignant to think of this chap with such a lust for life and people tucked away on his own for so long. He died in 1967.

There was plenty for our young historian who caught fish with magnets, rang the steam engine bell and made quilt patterns on the floor. It was a delightful place to spend four hours and frankly that wasn’t long enough, but we had miles to cover so we pulled ourselves away and headed north once more.

Highway 30 is wide and smooth and we wound our way into the heart of the park; through villages which call themselves “Hamlets” up here and past little lakes with elderly float planes parked at the edge. Tourist season won’t start in earnest until after July 4th and its been a bit like watching the dress rehearsal. People in shops are friendly-ish, but often seem a bit unsettled somehow, as though we have arrived early. Asking for advice appears to cause puzzlement more than anything (“you want to go for a hike?”), and the people checking us in at campsites seem to take forever to put everything into the computer. Its nice to see behind the curtain though, and especially because nowhere is really crowded…yet.

It was still cold and raining hard when we got to this campground which surrounds a lake. It was described as one of the jewels of the Adirondaks, but I rather think that was the site we left this morning… This is fine though and we settled down for a quiet evening in. Shrimp pasta, some more of Joan’s Scones and a DVD on Harvey’s rather fine drop-down screen. It was all the cosier knowing that it was a cold evening outside.