We were the only people for breakfast this morning and everything had been laid out for us on a trestle table in the little stone hut with the gravel floor. Our guide for the morning, Giel Steenkamp came over for a chat. He is a well-weathered, enthusiastic chap who was born and raised in nearby Keetmanshoop (“Keetmunsverp”) and bought the farm in the 1970s. His son now runs the business and he takes people to see the fossils.

We drove through the farm to a rocky hill where a grave marked the death of a German soldier in 1904. He’d been with a patrol trying to retrieve some animals stolen by the local Nama. They opened fire on the patrol from a ridge and the soldier was buried where he fell.
Fifteen years ago Giel was clearing a track through the area when his ten year old son Hendrik noticed an unusual rock in the rubble. Giel came to have a look and cracked it open. Inside was the perfectly preserved imprint of the mightiest creature to roam the shallow lagoons and marshes in the area two hundred and sixty million years ago. The Mesosaurus!

It dominated the environment with its snout of needle-teeth, and its great bulk – growing to an impressive, um, thirty centimetres. The animal had died and sunk into the mud and although the remains had long dissolved away, the imprint was left perfectly preserved. It was so detailed that you could see the individual joints in its bony claws.

Giel had a friend who knows about these things come and look and was astonished to discover that it is one of the oldest fossils in Southern Africa, pre-dating the end of the dinosaurs by about two hundred million years. It came from a time when Africa and South America were joined together, and the same fossils can be found in Brazil. So important was this fossil area that Namibia’s Department of Antiquities said Giel wasn’t allowed to open any more rocks, and it took him a year to get permission to conduct guided tours on his property.

He showed us several more fossils that were already exposed on his land and had a great line in patter. At one point he said “they are very common these fossils” and threw the ones we had been looking at into the bush. We were left open-mouthed and he roared with laughter, before revealing that he’d actually thrown away two other stones which he’d switched without us noticing.
The tour ended at some stacks of dolorite – cooled lava tubes that have been exposed by erosion.

Some have a very musical chime when struck and Giel played us a couple of tunes before leaving us to wander around on our own. Its a special place, and part of its charm is that it hasn’t been overdeveloped.

We had a picnic lunch up with the dolorite stacks and the quiver trees before packing up and moving on.
The next stop turned out to be about the most dramatic of our whole trip – and one of the most difficult to get to. After an hour or so of driving through flat, featureless gravel plain a big black volcano loomed on the horizon like an island. The Brukkaros volcano has a few community campsites at its base and some more dramatic ones up a tough 4×4 track.
There was no-one at the entrance gate and we opened the barrier and drove in. First past the lower campsites and then up a track which eventually became almost undriveable. By that time of course it was impossible to turn around so we had to keep going up a road which had once been re-inforced with concrete but now had little strips of concrete on one side and rocky pits on the other. It was a nail-biting, jolting ride and ended at a cluster of semi-derelict campsites with the most stunning view. We hadn’t seen a soul all afternoon and the five sites were all deserted. We found one that had the most level strip of ground. Each site once had a shower and a stone hut and a long-drop toilet, but the huts no longer had roofs, and the sites no longer had water. The fireplaces and long-drops were still useable though and it was a magical place.

There was a stiff wind blowing so we got the tents up quickly and started making supper over a fire, using up the odds and ends in our fridge and coolbox. 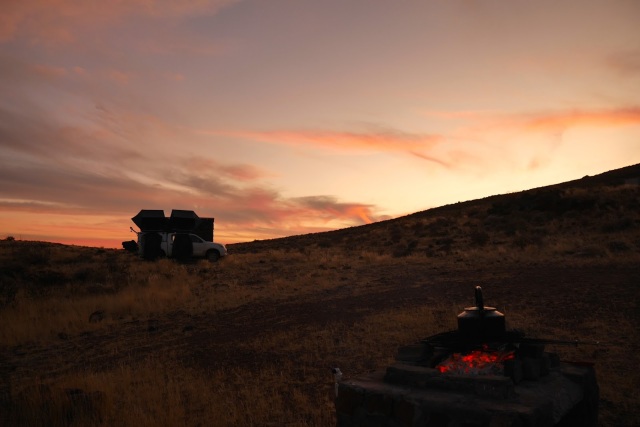 After supper we spent almost an hour simply staring up into outer space. The stars were astonishing. We watched satellites and shooting stars and used an iPad app to find the planets. There was no light pollution whatsover and I doubt we will ever see so many stars again.

The wind was getting stronger and when we crawled into the tents they were blowing around almost as hard as they had been at Sesriem. We worried that Tom was going to be kept awake but he was asleep within ten minutes. P and I hunkered down in our sleeping bags as the tents shook violently around us. The flysheets whipped and slapped, generating so much static that sparks were jumping between the tent frame and car roof with a violent crack. It looked like being a long night.