“Don’t let the perfect be the enemy of the good” is a phrase I have come to rely on as a useful excuse for being slack. But sometimes it also cuts through all the ums and ahs about decision-making when you can’t quite get everything that you want. Here was the problem… we had to end the day at the Fish River Canyon south and east of us, but then there was this ghost town, Kolmanskuppe, and the end of the world port town of Luderitz both around 100K due west of us to see as well. No, we wouldn’t get to spend hours or days exploring them both, but 100K on the fast B4 was only an hour from Aus, which in Namibian driving terms is like popping next door. So at 8.30 we dropped off our laundry at the front desk and hit the road to the ghost town.

The road is a straight line through golden desert following the tracks of the railway from Windhoek to Luderitz which fell into decline and is being upgraded to serve as a freight line for the mine at Rosh Pinah. Its still due to be completed about three years ago. Until then the freight – huge trucks hauling gravel and other supplies – is about the only traffic on the black tarmac between Aus and Luderitz. As we got closer to the coast we could see a thick fog bank lying across the desert like a grey duvet and soon we were in it.

Kolmanskuppe was once the most prosperous town in Namibia with a population of more than a thousand. It was a mining settlement founded in 1908 and owned by the company which discovered diamonds in the area.

It had a casino, a bowling alley, sausage deli and a general store from which you could order champagne and caviar.

Its hospital had the first x-ray machine in southern Africa and there was a narrow-gauge horse-drawn tram which ferried people from one end of the town to the other. 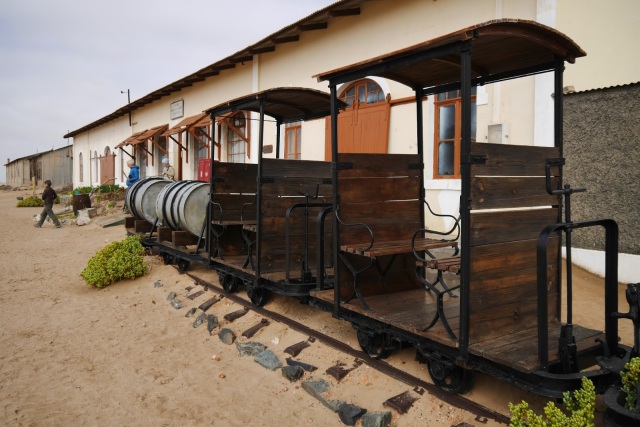 Opera singers were brought in from Europe to perform in the community centre and dining room, which also showed some of the first movies.  Every house had electricity and a telephone (and this was 1908 remember…), and every day, every residence was given a block of ice, fresh water and lemonade. They imported their water from Cape Town and piped in seawater 35KM to fill a swimming pool.

I should point out though that this was for the white workers. The hundreds of black workers lived in barracks further down the hill where they were confined for the two years of their contracts.

The work was gruelling for them, shuffling on their bellies over the gravel plains picking up diamonds with mesh taped across their mouths to stop them swallowing them. There seems to have been a constant battle over stolen diamonds, with some workers going so far as to make incisions in their skin to hide them, and a gruesome regime at the end of the worker’s contracts involving two weeks of castor oil and wire mesh toilets. We weren’t shown that area…

In its heyday the diamonds carpeted the plain. They were so easy to find that there were twelve hour shifts overnight too, when the stones were said to glitter in the moonlight. But the diamonds thinned out, the company moved on and the last cluster of miners left in 1957.

We had an excellent forty five minute tour through the skeletal brick and wood buildings that remain.

Our guide had some great little details about German miners bringing their wives over from Europe and paying the captain to disembark them in Luderitz at night so that by the time the women saw the desolate surroundings in which they found themselves, the ship home had already sailed and wouldn’t be back for another two months. 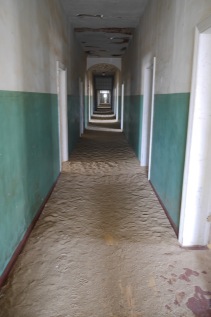 Afterwards we were left to potter about by ourselves; wandering through the old hospital with its wine cellar in the basement, exploring the remains off the old ice factory and finding the granite bath in one of the palatial but ghostly mansions on the hill. 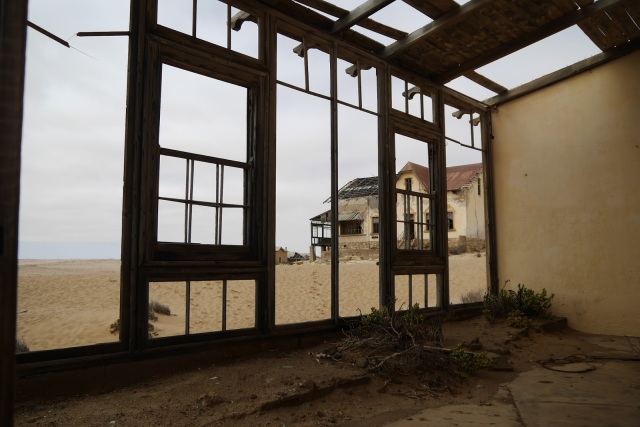 And in all of them, an unstoppable tide of sand marching through. 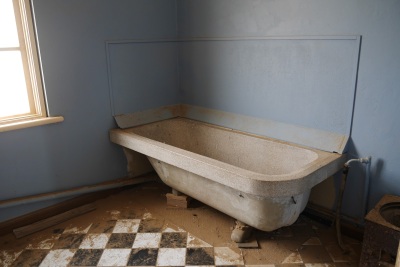 The schoolteacher’s house was basically a large dune with a roof. 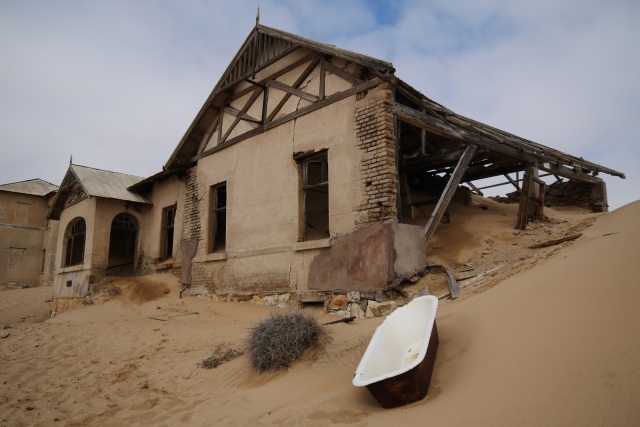 Yes, we could have stayed longer (perfect, enemy, good, etc) but we drove another ten minutes down the road to Luderitz for an early lunch.

Luderitz is a gritty little port town, full of dock workers and diamond miners and fishermen. Everywhere there were knots of young men watching, laughing, waiting for something or someone, but it wasn’t threatening. It was simply a workaday place with people getting on with their business. Luderitz is literally at the end of the line. And the line has no trains on it. Its not on the way to anywhere and though vaguely on the tourist trail, it is so far out on its own that few come through. But it is not without charm.

The old town has a sweep of German buildings going back to the early 1900s all vividly painted and there is a bustle to Luderitz which you don’t see so much of in the hot and dusty towns inland.

We scouted out a cafe on the waterfront and were met by a young waitress with a sparkle in her eye and a world-weary air. Her name was Amante; “Born in Luderitz, went to school here; I have a three year old son. Probably be a grandmother here” That last bit said with a wry laugh. She brought us pizza, amused by P not eating meat. “Here’s one for the vegetable”. Then coffee and what might just be the best apple cake we’ve had in Namibia. It was a jolly lunch and Amante kept coming back to chat. She couldn’t wait for her busy three year old to go to school and was intrigued by what Tom was up to. She was one of those people who in a different setting could have been anything she wanted. We said our goodbyes and had a quick look at the waterfront before heading back to the car.

Luderitz actually has a rather dark past. Just beyond the harbour there is a desolate bit of rock called Shark Island where the German military set up a concentration camp after the Herero uprising in the early 1900s; working thousands of prisoners to death while thousands more starved. Up to eighty percent of those who went to Shark Island are thought to have died. There was much to see and it would have been nice to look around a little more, but “don’t let the perfect…” etc, and we had a long way to go.
First back through the desert, flanked initially by signs from the Namdip diamond company saying the land either side of the road was off-limits. They now mine a big swathe of the coastline around Luderitz and entry to the area is liable to see you escorted off by armed security guards. The battle over diamonds continues…
The guide books advise not driving out of Luderitz in the late afternoon as the sand whipped up by the strong winds can take the paint off your car. We blatted down the highway and got to Aus an hour later (with our paint intact) and picked up our laundry from the lodge. It was very nice to have fresh clothes again after several days of, er, recycling.
Next stop, the world’s second largest canyon (by volume), a solid three hours away and our furthest point south. It was an unremarkable drive through gravel plains. Wooden electricity pylons marched off to the horizon. Gravel trucks wooshed by. Now and then we drove over sandy river beds, but we didn’t see a single animal. It may be the aridity, or it may be the proximity to the hunters of South Africa who wiped out so much of Namibia’s game but there are far fewer animals in the south it seems. 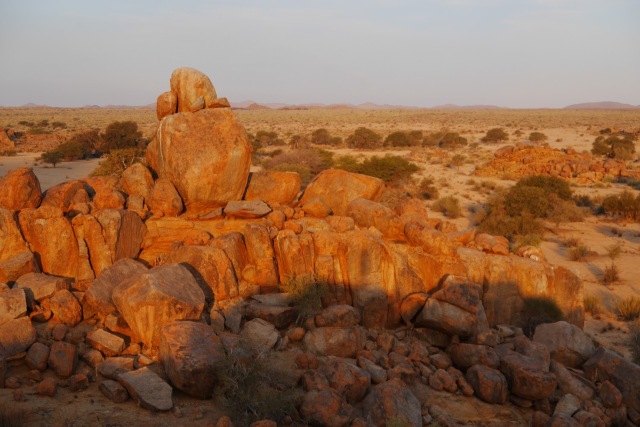 Just before the Canyon Lodge we stopped at one of the boulder hills for a run about and to watch the sunset. Off in the distance we could see the gorges of the Fish River weaving through the desert. The sun slowly rose up and off the boulder tops around us.

As we returned to the car we saw a newly dead Oryx which appeared to have fallen and broken its neck. The hyenas had yet to get to it.

Our chalet – a thatched stone hut – was set in manicured lawns looking out across the plains. We were all a bit frazzled after a very long day. Dinner, bed, sleeeep.