By Richard ListerJuly 22, 2015
We woke up to the sound of birds…lots and lots of birds all shouting at once in the sandy flood plain where the Puros Community Camp sits. We are only about 50K from the sea and the coastal fog was creeping over the mountains to the west of us. And for the very first time on this trip it was cloudy, cold and dank. After two hard days of driving none of us was ready for anything more than a warm drink and some sitting about with blogs and Kindles and cards while the birds cheeped and squawked and watched us.

We are so dusty. Our fingers are ingrained with it, our hair is dry and matted, our clothes leave small clouds in our wake as we walk. We are Pig Pen in “Peanuts”. Everything in the back of the truck is coated in white, red and grey dust, including our holdalls which thankfully do a pretty good job of keeping the dust out. We are not sure whether the water at the Puros community campsite is drinkable so we are using the ten gallon barrel we filled at Kunene. Everything takes thought. We have a limited supply of firewood and it takes at least half an hour for the fire to be ready to cook on.The sun goes down and it gets dark around 6.15. which then makes cooking more complicated. The fridge (yes, the fridge!) runs off a battery which needs about fifteen minutes of driving time to charge. There aren’t necessarily food shops… Its interesting to have your life governed in this way when we are so used to everything available all the time. Its strangely liberating too because you are forced to only think about the essentials and can ignore all the other clutter of a western life.

It took several hours for the low cloud to burn off but by late morning with the sun warming us, we had itchy feet again and set off for Puros Canyon a few K down the river. We drove through the sand back to the village, passing a grazing giraffe. Puros looks rather like a set for a spaghetti western; scattered mud huts with stockades spread across a very broad sandy plain and rocky mountains all around it. We turned off the “road” and back to the riverbed track.  Just outside the village is what they call the “fountain”; a spring which feeds the river. All of a sudden out of the dryness there were clumps of plants and then a trickle of water and cattle grazing on actual green grass. The pink-rocked gorge was fairly wide and the stream slowly built into a shallow but respectable river. The track crossed it several times, the truck wheels throwing up great showers of glistening water. 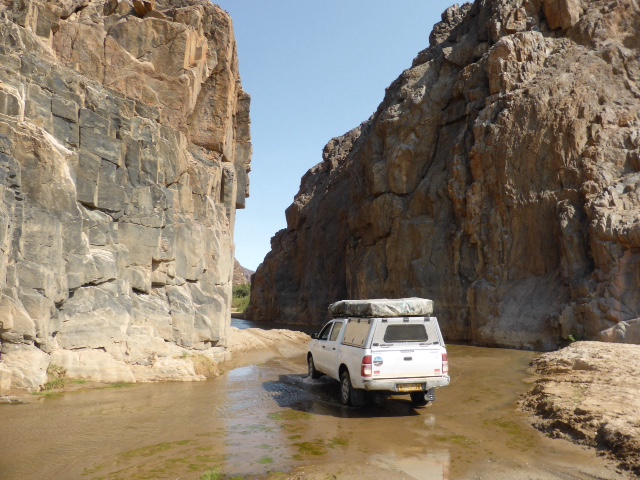 After about 10K the gorge dramatically narrowed  with the river gushing through a gap about fifteen feet wide. I drove through it with Tom, the wind groaning around us, while P stayed to take a picture. Tom was determined that we should then leave her behind for a Very Funny Joke. I was less sure that ALL of us would find it so funny. We all drove back through and found a good scrambling cliff for lunch. 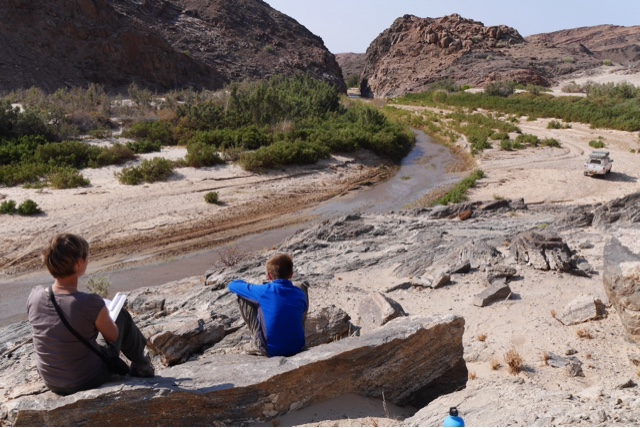 It was utterly peaceful; the sun-drenched rock humming with heat and the occasional cow plodding along through the river. We sunbathed and read and mucked about, whiling away a couple of hours before heading back to Puros. A couple of baboons gave us a haughty look as we passed and there were several birds we hadn’t seen before. 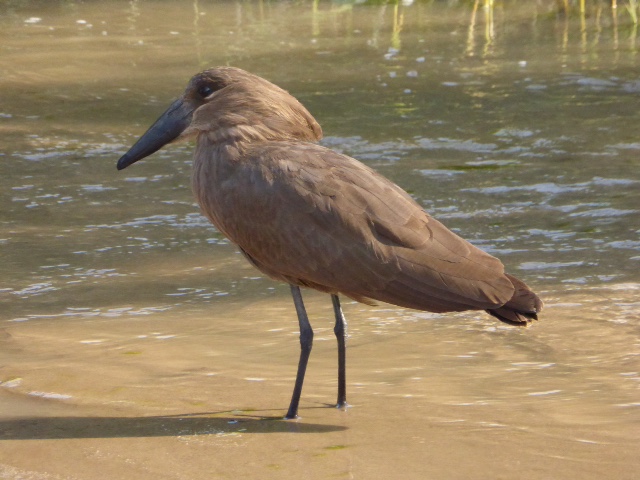 A group of South Africans were driving the way we had come and we realised how lucky we had been to have the place to ourselves for the afternoon.
It was windy at the camp and the fire took in no time. Pasta with a tomato, onion and mushroom sauce and grilled sausages.

I was rather proud of doing it all over the fire and having it all ready at the same time. We cuddled up in Tom’s tent for a movie and lights out at 9. What a smashing day.