We had a very long way to go today over difficult roads so we made a plan to be on the road by eight and at the stroke of nine twenty five we were on our way. This was to have unexpected and ultimately rather special consequences later, but I’ll get to that. One of the reasons we were late is that we were determined to have pancakes from a rather clever mix in a plastic bottle we couldn’t resist when in Tesco. You add water to the fill line, shake the bottle and then pour it into the pan. Tom and I shared the pancake duties and it sort of worked. Provided you put on enough golden syrup on the resulting scrambled-pancake-bits, it was not at all bad.  Golden syrup has that effect on many foodstuffs.

Before we left I checked with the woman who owns the camp site about the best route to Marble Camp (our destination) and she shrugged and said she had never been in that part of Kaokoland before. So I weighed up the options on the satnav and we set off for Opuwo. It is the only town of any real size in this neck of the woods and a three hour drive south. There are lots of Himba settlements and we saw a small herd of impala running by the road but mostly it was a long hot slog over reasonable gravel roads, that got less reasonable as we went along.

We were stopped at police foot-and-mouth checkpoints a couple of times, but we didn’t have it. The first checkpoint was a very jolly affair with two guys who really wanted to chat. Santiago “like in Brazil” and Costa who wanted to know which team we supported. Premier League football is the lingua franca of Africa and the fact that we live a mile from Arsenal stadium opens doors (even though none of us are fans…). But our checkpoint duo were Manchester United fans so that was the cause of much hilarity. The police always want to chat to Tom: “Why you not in school?” they ask with a smile. Santiago wrote down his email address for us and was delighted we had been to Epupa Falls; “My home town!”. It must be a quiet job sitting in the sun waiting for a handful of vehicles each day. It was nice to have fun with them for a bit.
Opuwo feels like a classic frontier sort of town; a crossroads and supply depot for overland travelers and traders. Its somewhere to fuel up and leave behind and it is also the most diverse place we have come across. 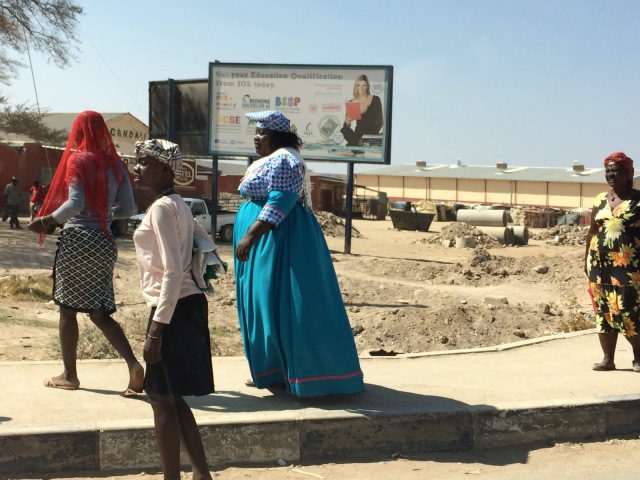 Its scrappy main street is a colourful mix of young women in short, bright skirts and middle aged Herero ladies in full Victorian garb complete with bizarre cylindrical hats. Then there are the groups of Himba forced into town by the continuing drought but making no concessions to the 21st century. They are unmistakable in their ochre paint and animal skins. They really are some of the most beautiful people I have ever seen. They all have such striking faces and elaborate hairdos. The young men have their hair shaped into a long smooth point at the back of their heads, like a Toby jug and the women have red braids arranged according to their age and status.

We pulled into the supermarket car park to stock up. A couple of dusty boys offered to watch the truck – as is the custom. The second boy was older and said we should pay him; “I am the boss”, leaving the first – younger – boy looking disheartened. “Yes, he is the boss but he won’t give me any of the money”, he said quietly. The supermarket was busy and well stocked and we got supplies for the next few days. Next door was the only place in town worth eating at according to the Rough Guide so we dived in for a sandwich. “The electricity is out so nothing hot” said the waitress. There were a few people at the patio tables drinking large bottles of Windhoek beer. The guy at the next table struck up a conversation with us and looked doubtful when we told him where we were headed. He didn’t think we would make it before dark. A large lady with a shriek of black hair at the table behind us joined in saying that if we needed to stop in the bush for the night, we should try to camp near a settlement for safety. We thanked them, finished up and paid quickly, newly aware of how much further we had to go. We gave both car-boys a few coins and they both looked unimpressed.

One more stop in Opuwo: the petrol station, which would be our last fill up for several days. Amazingly the young pump attendant managed to fill both tanks – the first time it happened and really the only time we wanted to be sure we had that much fuel on board. It was good to know we had 1200k in the tank. I took it as a good omen and we struck out west of town on the the D3707. 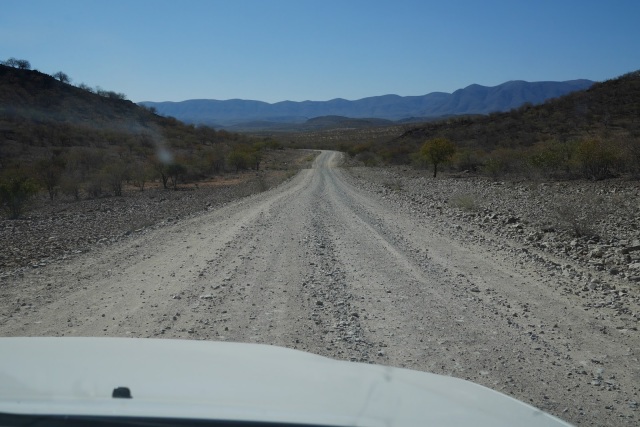 It is a minor road that had its fair share of corrugations and rocks and sudden obstacles. There were perhaps a couple of cars on that stretch coming the other way, but really it was a straightforward drive. To start with. Very soon the road was entirely our own and after a couple of hours or so, it was no longer a road.

On the map, the white road turns into a brown trackway and in reality that meant a barely-there route which took us between jagged rocks, across broad sandy river beds and over boulder fields.

Sometimes we were weaving between trees as if driving through an orchard. Then we would pop out into a rocky clearing surrounded by great hunks of shining quartz. Mysterious round grey boulders would emerge from the sand as if part of a film set. The sandy soil went from red to grey to gold and back to red. And all the while we were jolting, weaving and bouncing slowly along the track keeping a close eye on the satnav. Without it we simply could not have found our way as the sometimes invisible tracked fanned off in all directions.

We were aiming for a community campsite – Marble Camp – where we had a place booked. The satnav’s estimated time of arrival though kept slipping and slipping and we decided to check out the only other campsite marked on the map, at Etanga. But when we got there it was little more than a shabby collection of huts with no campsite to be seen. A little boy ran alongside us desperate for us to stop but we were running out of time. In the rear view mirror I saw him pick up a stone and angrily throw it in our direction. So with no alternative campsite we ploughed on, getting briefly stuck a couple of times, but nothing that the four wheel drive couldn’t eventually overcome. It was exciting and exhausting and two and a half hours in, the satnav was predicting that we wouldn’t get to Marble Camp until half an hour after sunset. There were no real waypoints marked on the satnav apart from “bad road” and “dry riverbed”, though there was one called “Jurgen’s Exape Caravan Wreck”. Sure enough there it was, the shell of an old caravan with “Exape” still visible on the side. I wonder who Jurgen was…
We weren’t going to make it to Marble Camp. At about 5, after three and a half hours of jolting through the bush, we set about looking for somewhere to stop. At one wide, sandy area sprinkled with small trees we saw a group of Himba waving us down: a woman who could have been in her sixties, with an older man and a scattering of solemn children. We slowed and wound the window down and the woman immediately started miming a dry cough and pointing to one of her children. She was looking for medicine. We had plenty but nothing specifically for a cough. The little lad looked like he had a bad cold and with hand gestures we ascertained that he also had a headache. In our medical pack we had some children’s aspirin and dissolved one in a small bottle of water. She gave it to the boy who drank it down and we all smiled at each other. Miming sleep, I asked if we could camp by the village, which seemed to puzzle them somewhat. I drew a picture of a tent on the ground and pointed to the roof tents and eventually they got what the mad foreigner was on about. A young woman with a tiny baby lead us to a spot in the sandy clearing and made clear we could camp there. We had a small audience as we put the tents up and – even though no-one asked us for anything – we gave them a squash and a bag of carrots in payment for our site. They seemed pleased and immediately returned to their village which seemed to be beyond a rocky mound a few hundred meters away. We never saw it. It was a really nice interaction in which we were able to trade as equals – we had something they needed and they had something we needed. 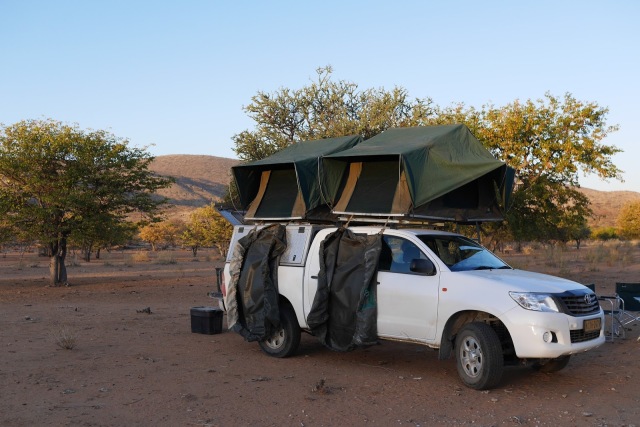 We were alone under the stars with just the occasional voice drifting across from the village. We set up the stove and cooked some supper under the stars. We felt incredibly lucky to be there and to have had that experience.