We are in Sundal, a lovely little place which reflects many of our experiences over the past few weeks. The three of us are sitting on a wooden jetty looking out over the Kvinnheradsfjord which is dark and glassy, its surface rippled only by the occasional leaping fish. To the left is a fishing dock with white clapboard buildings and a wooden-hulled fishing boat tied off for the night. To my right, shafts of light from the evening sun are  slowly tracking up a steep green mountainside. Behind me, the sun has just lit up the top of a glacier, which is sending a river of blue-grey ice steeply down the mountainside. We really didn’t think we would get this lucky tonight.

It was a dullish sort of morning when we woke up and both Philippa and I were wondering how we could make the most of our penultimate day on the road. We’ve actually come south of Bergen in our attempts to pretend to ourselves that this holiday is going to keep on going. But we had no Big Thing planned and walking didn’t particularly appeal without the promise of great views. So we mooched about and Tom did another practice English paper (oh the enthusiasm for THAT) and  even though we were on the edge of one of Norway’s great fjords – the Hardanger – there was a feeling of our journey going out with a whimper. Our Dutch neighbour had left  Espelandsdalen Camping early, so we were the only ones there by the time we joined the twisting  road that wound down towards Ulvik. As we went, we flushed clouds of little darting birds from low hedgerows full of pinky-purple Lady’s Slipper. The old barns had roofs made from huge slabs of slate and it was utterly quiet. We saw not a soul.

Ulvik was just about open but eerily deserted. We got a photocopy of the ferry timetable from the tourist office (“do you have 50 krona for the ink…?) and then got very lost trying to get to Kinsarvik, where the ferry leaves for Utne – one of the prettier villages at the junction of several fjords. Some way down the  road out of Ulvik we passed an abandoned ferry terminal and assumed it to be Kinsarvik, so we abandoned our Kinsarvik ferry plans and put Kvanndal into the satnav, which also has a ferry to Utne.

But then we got sucked into a tunnel and spat out onto a graceful new bridge which after some head-scratching we realised had taken us just up the road from Kinsarvik.

Twenty minutes later we were buying our ticket from the ruddy-faced, twinkly-eyed, grey-mustacheod ferryman:

The ferry was one of the smallest we have been on and just about the only other passengers were a bus-full of long-lens toting chinese people eating noodles they had brought with them.

Utne was indeed a delightful little place, a string of wooden waterfront houses and a white-painted church. We found a carpark with a view to have our last pack of Lofoten’s finest fish soup. Our food supplies are almost gone now and we shall miss that soup! 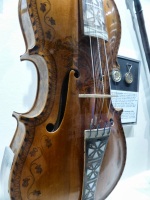 It also had an interesting display of Hardangar Fiddles, which have a second set of strings underneath the usual four and make an unusual, almost accordian-like sound. They also had some extraordinary primitive slim boxes with a single string which were played with a bow, and some long, slim birchwood trumpets used by shephards to communicate from mountain to mountain, and to scare away predators.

Behind the museum was a great collection of old Norwegian buildings. The oldest was from the thirteenth century. It was a single room log house with a vent in the roof for the smoke from the raised fire pit in the centre of the room. The vent also provided the only light. There was a heavy stone floor and benches on three of the walls used for sitting and sleeping. At the back was a long wooden table and behind it a rack with spoons made from wood and horn. Everyone had their own and they all ate from the same bowl. Next to the bench on the back wall was a hatch which had a single function; it was for the removal of the dead. At the time, people believed that the souls of the dead would always try to return home, but only through the last door they had left the house from. So after the body was taken out through the hatch, it was closed and not used for anything else. It felt to me like we were looking at a house that would not have changed much since the viking era.

There was also a small log cabin from the 1820s owned by one Gunnar Arnfinnson Årkol who was weakened by TB and no longer able to be a crofter. He’d tried all sorts of other occupations including bookkeeping, but discovered eventually that what he was really good at, was painting – and in particular, painting furniture with floral patterns.

He became well known for his skill and his cottage had lots of little pictures on the wooden walls and furniture that he had painted. 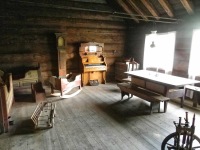 As we walked around the buildings the sun began to come out, finally lighting up the Hardangerfjord and its surrounding mountains. It put a spring back in all our steps and we made plans to head down the long sliver of Sornfjord  to Odda where there was a reasonable-looking campsite.

It was a perfect drive through the fjord country with pretty little buildings all along the water’s edge of the kind we had just seen in the museum. The sun shining on the opposite bank made the red barns stand out like bright sparks against the green hillside. We passed fields of fruit trees and little stalls selling punnets of plums. It was a grand drive of about 40K down the length of the fjord.

As we drew closer to Odda though the landscape changed. There were two big container ships anchored by an island which was completely full of some kind of production plant. A huge carbide factory was established nearby  in 1908 and for a few decades Odda was something of an industrial mecca, but its heydey is long gone and today it has a gritty, ground-down feel overshadowed in parts by the giant concrete remnants of long-gone factories. That said, it still has plenty of characterful clapboard houses and its not hard to imagine Odda making a comeback as one of the more unusual destinations in fjordland.

When we got to the campsite though it was a depressing collection of ratty caravans and people sitting around on benches smoking.  P and I knew immediately we didn’t want to stay there, but we hadn’t seen anywhere on the way that looked like a good free-camping spot. On the other side of the mountain we knew there was another campsite in a more remote area, and thankfully there was also an eleven kilometer tunnel which would take us there.

As soon as we came out of the tunnel mouth we knew we had made the right choice. It was like going through the back of the wardrobe and into Narnia, a brilliant stretch of fjord gleaming off into the sunset with mountains crowding in from either side.

The view of the glacier was the icing on the cake and we pulled in and parked up. Its great to end the day feeling uplifted by Norway again.