We are on the road again. It was a gorgeous sunlit morning in Halifax and time to give Paul and Nancy their house back after the Invasion of the Parts Snatchers. Harvey fired up and moved out as if the events of the past two days were a minor and slightly embarrassing interlude that we needn’t discuss any further. Actually there was nothing to be embarrassed about. Both the cv joints we replaced were original, and thirty two years isn’t a bad track record for a part like that…

Nancy led the way to the pretty route to the coast and with a final wave, left us at the turnoff to Peggy’s Cove. It was certainly the most enjoyable breakdown anyone could have possibly had and Paul and Nancy we thank you both.

Peggy’s Cove is the most famous of the pretty little coastal villages in this region and consequently the busiest. But the road from Halifax takes you through postcard territory with deep blue inlets fringed with ochre coloured rocks. There are crisp little clapboard cottages and older fishing shacks on stilts over the water, sagging with age, red paint faded in the sun. The road also passes through an area called the Barrens which is a strange netherworld between the sea and the shore. Grassy hillocks topped with large stranded rocks rise around shallow pools of seawater cut off by the tide. It was an eerie and beautiful landscape.

Everyone turned off at the Peggy’s Cove sign and there are two huge car parks for a village of perhaps twenty houses – and the most photographed lighthouse in Canada. As a village, it is not exceptional (although the lighthouse is a bit of a showoff), and it is rather overwhelmed by visitors. That in itself means that the village adapts to them and is changed by them (er, us). I think the bagpiper playing “Speed Bonny Boat” at the lighthouse, was possibly the start of a fightback by the locals who would prefer to have their village to themselves. It nearly worked on me. 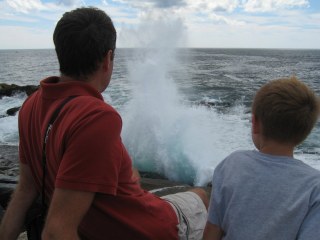 What really makes Peggy’s Cove is the shoreline. It is a dramatic sweep of low smooth rock pounded by thunderous blue-green waves throwing up plumes of foaming spray. We watched transfixed as the breakers rolled in and smashed into the shoreline. Cormorants dived into the waves almost as they broke. Tom loved racing over the rock and despite we tourist hordes Peggy’s Cove is rather special. 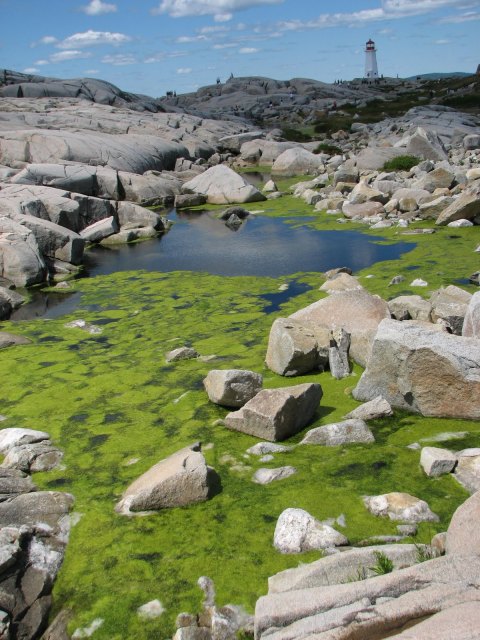 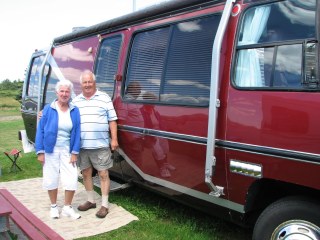 Just down the road is the King Neptune campsite which Nancy steered us towards to meet some friends of theirs who are part of the GMC Cosa Nostra. We pulled in and there was a burgundy GMC gleaming in the corner. It was empty and we were about to turn around when a little car pulled up alongside and Bill and Nita waved and smiled at the unfamiliar GMC in their midst. They were great fun and we compared notes about our vehicles and looked over the interiors. They are so infinitely customiseable that every one seems to be different. We talked about our trip and Nita said they had been to Gaspe many years ago. “We should never have gone” she said “we had only just bought our GMC and didn’t have a clue about what we were doing”.  She shook her head, smiling at the memory.

On down the coast past chocolate box villages – each one just a small jumble of wooden houses, some white-painted, others faded and grey. Small fishing boats were moored at the end of jetties. Some inlets were full of small scrubby islands with pine trees and rocky beaches. Others were broad and blue with yachts bobbing at anchor nearer the shore. It was the prettiest stretch of road we have drive on this trip – not the most dramatic or the most rugged, but a perfect little scene around every curve.

We stopped for lunch at the Trellis restaurant in Hubbards, where we sat ouside under some kind of trellis (strange that). Everything was home made and P and I had the most delicious salads with our smoked salmon quiche: spinach and strawberries with Asiago cheese and some kind of poppy seed dressing, the recipe for which I tried and failed to prize from the waitress who said it was a state secret.

Back on the road and Tom curled up and went to sleep on the sofa as P and I enjoyed the view. He woke up in Mahone Bay with its three churches in a line, each trying to edge the other ones into the bay it seemed. There was ice-cream, there was shopping, there was posing for pictures through a cutout of giant ice-creams and then there was a final ride to our campsite across the bay from Lunenburg. Its a great spot where you can pan for gold on the beach and see the caves, or “ovens” as they were known here. Its so nice in fact that we will stay here tomorrow too. Harv, its good to have you back.