This is a magical little place; a grassy campsite just off the beach with  twenty sites. There’s no electricity or water, just a place to park with a picnic bench, sheer mountains on one side and a wild sea crashing over big round rocks on the other. 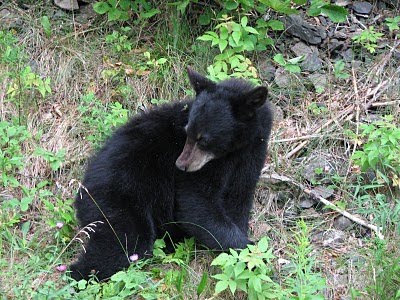 Cape Breton is right at the top of Nova Scotia, and the National Park encompasses some of the last wilderness in the province. It’s mountainous and craggy around the edges, boggy in the centre. Within one minute of crossing into the park we saw a glossy little black bear right next to us on the road. He snuffled about in the undergrowth completely unconcerned. Tom watched it wide eyed through the window – he was no more than ten feet away from the bear. It seemed to bode well for the next few days.

Philippa couldn’t wait to get out of the campground this morning, but I insisted on having a little blow on the beach first. The sun was warming things up through the clouds and we strolled along a ramshackle breakwater which was slowly sliding into the sea. A small fishing boat had untied from it and was taking some kids and their bikes across to Cheticamp Island. Their yellow lifejackets were very bright in the milky mist and they laughed and waved to us.

Harv sprang a leak in last night’s driving rain and I can’t quite figure out where the water is getting in. There was no damage done, but an irritating drip was coming in behind our bed. I’ll have to get on the roof and have a look but the forcast is good and we have places to go, so later.

Soon enough we were heading up the west coast of Cape Breton. The villages here have Scottish roots; place names are in English and Gaelic, and the Gaelic version is sometimes an entirely different name. There are signs advertising celidhs and the names on mailboxes are almost invariably Scots. You see the flag of St Andrew flapping alongside the Canadian maple leaf. North of Margaree Harbour though the village names reflect a different heritage: Belle Cote and Grand Etang are full of LeBlancs and Doucets. This is Acadia again and people are speaking French.

At Cheticamp we stopped for lunch at a terrific little cafe which advertised lobster specials and wifi. A perfect combination. P and I both had variations of lobster salad and it was succulent and delicious. “All Aboard” is owned by a lobster fisherman and run by his wife and gaining quite a reputation. There was an article pinned up on the wall about a couple from Atlanta Georgia who fly up every year and go straight there  from the airport.

Cheticamp also had a well stocked Coop and a fabulous boulangerie which smelt of the bread they made in the back. We got blueberry turnovers, a raspberry stick, croissants and a cranberry cake. The one thing we couldn’t find was a fish shop despite driving back through the town again, so Philippa ran back into the coop in the end. We are not expecting much in the way of grocery stores in the next few days so its nice to have a full fridge.

The Cape Breton Highlands National Park is a short drive north and was instantly exciting. The road is a theme park ride, climbing steep ridges and instantly hurling you back down to the sea. The beach has two peat-stained rivers emptying into it and its pebbles shelve steeply into the breakers.

We watched a fiery orange sunset as the day cooled. Its great being out in the wilds again and tomorrow we hope to do a hike which the Park Service says offers the chance of seeing moose, bear, whales and eagles. Now that’s just showing off. 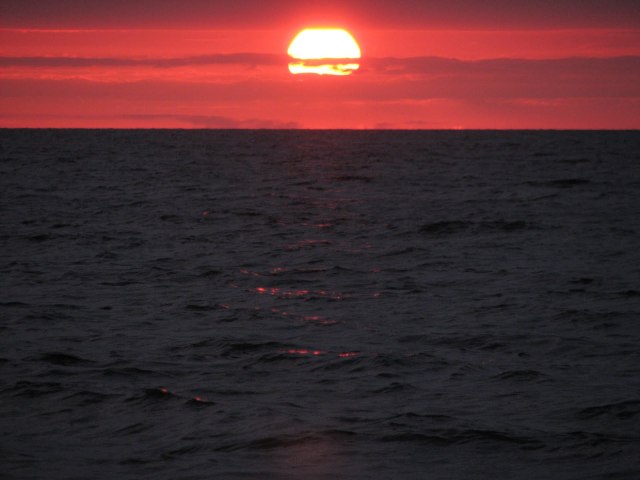