We are on the Brule peninsula, which is a left turn when you get to the middle of nowhere. We’ve had a day of odd little places and roads which didn’t get to where we thought they would but none the worse for that. Its been the perfect English summer’s day, breezy but with temperatures in the low eighties and no humidity. When its good, the weather here is really very good. We don’t need the heater at night and we don’t need airconditioning during the day; the air is fresh and cool.

Tom made us eggs this morning and then had an hour in the pool before we we drove on to find a bookshop. Amy’s used bookstore just up the road was a dimly lit warren of musty volumes stacked floor to ceiling. The guy behind the counter (Amy?) said there were three hundred and fifty thousand books and he seemed to have a pretty good idea what most of them were. Tom delivered his precise literary requirements and Amy came back with a stack of Magic Tree House books, all of which Tom had already read unfortunately.

So, next stop the mall down the road and a modern bookshop which had EVERYTHING I WANT MUM – LOOK! And indeed it had. P and I got a book each and Tom came out with five: “This is the best day ever!!!!” 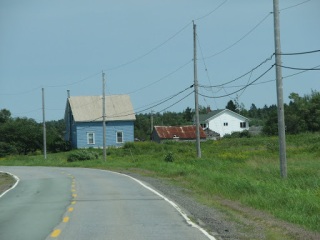 Right. Onward, down rolling Route 6 in the sunshine. Nova Scotia houses tend to be white and often have have tall narrow gables which we haven’t seen before. Er, quite unlike the ones in the picture actually. We passed smaller, older cottages with mean little windows to keep out the wind, and big farmhouses with little spires on the roofs, handsome barns and glossy brown cattle in the fields. This is what’s called the Northumberland coast on the north east side of Nova Scotia, so its also called the sunrise coast.

Eventually we came to Pugwash and really, we had to stop. The main street was about a quarter of a mile long and had a single cafe which was the absolute definition of what a small town cafe should be. It had wifi, second hand books, a cheery owner and an interesting menu. P and I had lobster rolls with lemon and dill and we all whiled away a happy hour on the terrace outside.

The other interesting feature of Pugwash, is that it sprang a movement which shared the 1995 Nobel Peace Prize. Now that made you blink didn’t it. Yup, millionaire industrialist Cyrus Eaton convened a “Thinkers Conference” there in 1957 founding the Pugwash Movement synonymous with global disarmament. It was later given the Nobel gong with Joseph Rotblat. Well fancy that. Our interests were a little more mundane. We fancied a swim at a sandy beach.

The cafe’s owner told us about a great beach “three miles north – its in a provincial park, a big open area, you can’t miss it”.  We set off, passing road signs written in Gaelic and English, but five miles later had seen nothing even remotely like the place he described.

One of the guides said that Fox Harbour also had a lovely sandy beach so at the sign for Fox Harbour we turned left on a narrow road which, several miles later turned into a gravel track between seaside cottages. Eventually it stopped in someone’s drive. Philippa went out to see where on earth we were while I tried to turn around in the single track country lane. I don’t recommend it in a 26 foot motorhome. A charming older gent Philippa met at the end of the road said he would lead us to the beach “Did you turn left at the cottage?” he asked. We must have passed at least thirty cottage by this stage so it seemed like pretty good odds that we had. “I’ll take you back to it”. We followed him back to the only junction and the only part of the road which in fact did not have a cottage on it. We all got out and chatted and he pointed out a field gate which he said we could walk around and to down to the beach. “Its no problem” he said “Its my land”. He was brown as a nut and somewhat deaf, and we chatted outside what must have been his mobile home, where he had waved us in to park. He said his name was Clarence Myers. “We’re all English around here” He said. “There’s a lot of Jamesons”. We weren’t quite sure what to make of that comment but he was a lovely chap and said we would be welcome to stay the night where we were.

We would have done too, but for the fact that the place was swarming with the most viscious mosquitos we have encountered on this trip. As we chatted three of them lined up and bit me through my tee-shirt, and we were both amassing bites all over our legs. Eventually we made a run for the rocky beach. They followed us there too until we doused ourselves with deet and P and T ran off into the shallow sea.

On the way back to Harvey they found us again and we decided to press on rather than stay and be trapped inside for the rest of the evening. Clarence was nowhere to be seen. We never did find the sandy beach mentioned in the guide.