Kouchibouguac is pronounced Koochy-BOO-goowak according to our guidebook, but when the cheery ranger at the entrance said it, it sounded more like he was coughing up a nail. Anyway, its a national park about halfway down the East Coast of New Brunswick and we didn’t think we would get this far today. It was a big drive by our modest standards, getting on for two hundred miles and we didn’t really get started until lunchtime.

Its been a blustery old day with dramatic clouds filling the sky, dumping some rain and melting away into the blue all within the space of ten minutes. On the other side of the lagoon from this morning’s campground and behind the town there was a wooded ridge rising steeply to eighteen hundred feet, with a little Oratory on top.

When we first looked up at it, the sky was clear and we set out for the top in Harv. As we drove the clouds descended, the rain fell and we were soon crawling up a punishingly steep, damp road in low gear. The road was built by a man who promised God he would do so if his wife recovered from an illness, and she did. But he wasn’t about to do any of that fancy “levelling out” business which so many new fangled road builders tend to do today. Even the car park at the top was a dramatic slope and we let Harvey cool off while we went to see the Oratory.

Originally it was a small stone church, built in 1935 with rocks carried up by the people of Carleton-sur-mer as an act of devotion.  Later on a new bigger roof was added to protect the original chapel and add some more space. It was lovely inside; very simple but with modern stained glass windows in soft colours which picked out other houses of worship including Ely cathedral – “the ship of the fens” – near my old stamping ground in Cambridge.

There was a photo exhibition about some of the people who had lived in the area; black and white pictures of smiling, weatherbeaten faces. One man leaning self-consciously against his truck, another on the bridge of his fishing boat in 1940 and frowning at the camera. One shot was of a four masted clipper which usually carried goods between Europe and Asia and was “a rare sight in Carleton”

Outside there was a series of information boards with a very honest and frank synopsis of the history of the area, in the way that such things never usually are. Thus the arrival of the much heralded Jacques Cartier in 1554 was described as a disaster for the indigenous people. The French naval forces were “hopelessly inadequate” in the face of the British advance in the late eighteenth century. It was a fascinating read and you wonder what it was like to live here in the late eighteenth and early nineteenth centuries. It would have been a mix of disposessed Mic-Mac (who I now see are spelt Mi’kmaq) Indians, French speaking Acadians who were returning to their former homeland after being booted out by the Brits; Scots and Irish settlers who had no love for the English but who had almost certainly moved into former Acadian farms, and then Americans loyal to the Crown who fled the US War of Independence and as a reward for their loyalty were given the best tracts of land by the British government. Talk about simmering resentment. They must have all hated each other. You can imagine visitors being taken aside at the pub and being told “probably best to not talk politics…”.

Interestingly there is a sense of the different loyalties today. As you drive past the houses they almost all have flags, but not the same one. In one stretch there were lots of Acadian flags, one house had a French flag, then a house plastered with Canadian flags, the next had the stars and stripes flying outside, others had regional flags which I couldn’t identify. There are still some differences being worked out here. 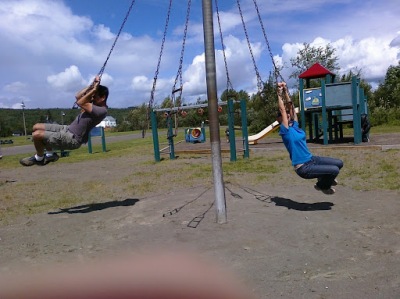 Driving back down the sheer slope of the mountain was as nail biting as driving up and at one point as I shifted into low gear the speedo cable said “that’s it” and quit. So we will rely on Google for mileages from here on. We stopped for lunch at one of the wayside halts that Parks Canada does so well. Soup on the stove and a playground outside which Tom hurled himself at. We waited patiently until he had finished.

At Campbellton, which is where the south side of the Gaspe peninsula begins, we missed a turning and found ourselves bumping through the residential streets of a native community. “First Nation” people as they are called here. The faces were rounder and browner and the street signs were in the language of the Mi’kmaqs. In some ways its a miracle they are still here, but they are.

We turned right onto the road we had missed and were soon crossing a handsome iron bridge into a different country. Well that’s how it felt anyway. All the shop signs were in English and the street names were Scottish – Aberdeen, Andrew, Argyll. We had left Quebec and arrived in New Brunswick, though with no fanfare – not even a sign to tell us that, and there was a sense that our trip had just become somehow slightly less exotic. Interestingly there is an hour’s time difference here, though we are no further out in the Atlantic, so for a while we will be just four hours different from the UK.

The road was smooth and fast and we hummed along it. Philippa and Tom played battleship in the back and Tom won more prizes which Kristin had so sweetly wrapped for him along with the games before we left. Thanks again Kristin! This feels like a strangely empty neck of the woods and we didn’t see houses or any real signs of communities for great stretches. There are towns here of course, but you really can’t see them from Highway 11. Bathurst and Miramichi came and went, as did the big blustery skies. Occasionally we would get a sudden, brief handful of rain flung at us but for most of the journey the rain seemed to have happened ten minutes before we got there and the road was steaming in the sunshine. We did get hit by one downpour and a river of water flowed across the road before the rain stopped instantly and the wipers were squeaking across the windscreen.

In the early evening we reached Kouchibouguac and were trying to get a handle on the ranger’s accent. Its supposed to be a pretty special place, so we will find out about that tomorrow.