We made it. I woke up in the wee small hours this morning wondering what running out of petrol would actually BE like and how long it would take to hitch out and back, and what’s the French for jerry can. Can you still say “jerry can”? or is that in some way regarded as a grave slight against our Teutonic neighbours and an unneccessary reference to past unpleasantnesses? OK, reserve petrol container.

The bottom line though was that we were up a mountain and heading for sea level. So one way or another there would be more down than up to deal with. That meant coasting. And that is what we did for roughly 14 of the 16.8 miles we had to cover between campground and main road. We barrelled down that gravel road like a runaway train,  sending small animals skittering for cover and spooking a couple of wide-eyed drivers coming the other way with dust billowing in our wake. A few miles from the sea we hit tarmac and poor old Harvey had a respite from the juddering and thumping which, we found later, had neatly emptied a new jar of marmalade all over the fridge.

We rolled to a stop at the T-junction in Mont St Pierre where we we had been assured we would find petrol. “Not here” said the lady in the tourist info place, but 5k further on. Well, we had come this far and Harvey seemed to be feeling decidedly upbeat about the amount of fuel in the reserve tank so on we went and found a little gas station with a scratchy radio playing pop by the pumps, where I put in 135 litres of fuel for $155. There was still room in the tank but the gas station was so small that I was holding people up so I decided to stop there, which means I still don’t really know how much fuel we had left. But put it this way, I hope that’s as empty as Harv’s tanks ever get and as Carl so wisely noted in his comment on the last entry, Harv had probably way more gas than I thought.

The road along the northern tip of the Gaspe hugs the shoreline and passes through occasional villages, which are no more than a few houses strung along the roadside. In one we stopped at an internet cafe to look for a laundromat (failed) and update the blogs (succeeded) and see if there are any more Jack Stalwart books in the series because there really must be I have read them all but I think he goes to Egypt but I’m not sure, but can we see if there are any (yes Tom, there are). The “cafe” felt like half of someone’s kitchen, which is probably what it was. It had three computers and an actual kitchen at the back. It was manned by a lad with long ginger hair dressed in black who practiced long, prog-rock guitar riffs on his (unlplugged) Fender while we tapped away. He leapt up to get us coffee though and it was a useful hour.

Further on up the coast we stopped at Gina’s Restaurant right on the beach and sat on the sunny terrace feeling pleased with ourselves. We were the only customers and the guy who seemed to be running the place single handed could not have been more friendly, bustling to get us a table out of the wind and putting an umbrella over us. P and I had Coquille St Jacques and T had garlic shrimp and all was right with the world.

From there, the road ran alongide steep black basalt cliffs and then looped and climbed steeply over high ridges. The sea was deep blue and proper Atlantic now with thick rolling waves that meant business. This is about as far North as we will go on this trip and it felt like it somehow; empty and quiet with a sense that the next stop north is the Arctic. 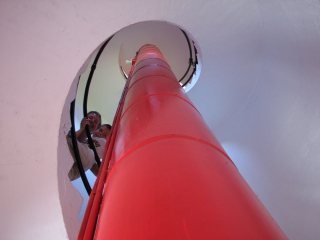 We pulled off the road to climb a lighthouse and emerged wobbly-kneed onto its outside platform with a skinny guard-rail and a bullying wind. Tom was all for running around it but we were all for going back in. There was also a little museum which a smiling teenager opened for us. At the back it had two vast compressed air tanks and the engines that filled them. The lad said they were for the “fog ‘orns” They had to be monitored day and night when the fog closed in so two lighthouse keepers had to be stationed there. There is a little automatic light now and the days of the lighthouse keeper are over. 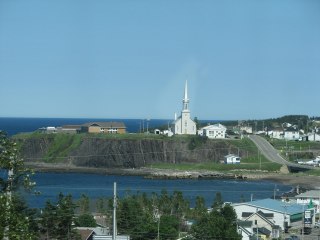 Onwards again toward the park at Forillon where we will be tomorrow. The lady in Mont St Pierre had suggested the campsite at Grand Vallee was nice and as we crested a hill and looked down into the town, with its crisp white church, epiceries and poissonerie, it seemed like a good place to stop. We bought more lobster, crab cakes and shrimp at the immaculate little fish shop, though I passed on the shrimp sausages. We loaded up at the grocery, cleaned up the marmalade explosion and drove on a couple of K to the campsite which slopes down to a rocky beach. It also had a laundromat so Philippa hauled our reeking bag over to it and came back some time later with clothes that we can wear without offending the animals. Supper was lobster and corn on the cob outside in late afternoon sunshine and a busy breeze. 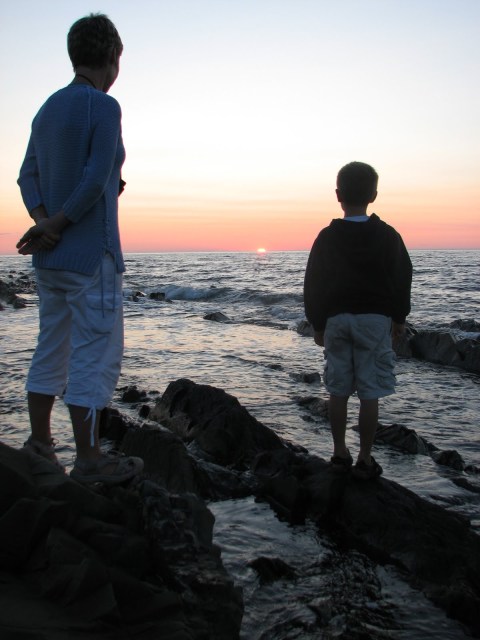 We strolled down to the beach, balancing on the jagged slate. Tom amused a fisherman by getting his feet soaked by a breaking wave, and then going back for more. We found pieces of broken dinner plate which definitely came from shipwrecks and real actual emeralds and sapphires, all of which Tom is putting in his museum. We stayed on the beach to watch the sun shimmer and vanish below the blue horizon and made our way back. I’m really very glad we didn’t run out of petrol.