We’ve all just watched the wonderful Ratatouille on the DVD and are feeling pleasantly weary after a big walk today. Tom fell asleep as he was saying goodnight and Philippa and I are not far behind him. Its pitch dark outside and utterly silent and we are feeling very snug. Not smug though as I am still all too aware that we still have to drive out of this park tomorrow and the petrol fairy has not paid us a visit. Anyway we’ll cross that bridge when we come to it. Or possibly splutter and stall before we even get to it.

But that’s enough metaphore tweaking. Today we conquered the second highest peak in Quebec! All 1286 meters of it, which is about, oh I don’t know, 4000 feet in the old money. Mont. Jacques Cartier is home to a dwindling group of Caribou in the only remaining herd south of the St Lawrence, The park is doing its best to look after them. To get to the trailhead you have to take a shuttle bus and there are stern warnings about staying on the trail and not bothering the animals should you see them. You also have to be heading back down by 2.00pm to ensure that the caribou have the rest of the afternoon to feed without being distracted by a lot of people dressed in anoraks.

Its a stiff climb of about 4 kilometers each way, with a couple more thrown in for side trips. Once through the treeline we were walking through tundra; scattered grey rocks painted with pink and green lichens. After an hour or so of walking, a clump of camera toting walkers ahead of us suggested that the beasts had been spotted, and there they were, plodding about on the slopes, not particularly bothered about us. 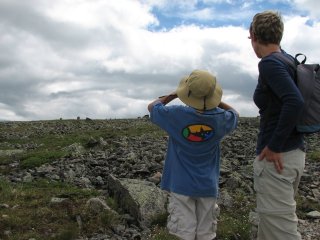 These caribou have evolved with much smaller horns than those further north to allow them to move through the forests more easily and their annual migraton is about three hundred meters – from one kind of forest, to another. If I was one of those Arctic caribou I think I’d be asking myself how come I have to migrate hundreds of miles when I could simply move south and play on the same mountain all year. It was a little sad to see them, as despite all efforts their numbers are still falling. There were only a handful of new calves this year.

We had our sandwiches on the summit looking across the velvety green Chic-Choc mountains and watching serious looking big grey clouds sweep over us. It stayed bright though and the wind had dropped to a refreshing breeze.

Walking down was hard work as the rocks underfoot were loose and often wet and slippery and our legs were tired. As ever though, Tom seemed to pick up extra energy on the way – I am sure he has some way to leach it out of me and Philippa. We took the shuttle bus back to our campsite and had big steaks (me and him) and veggie burgers (herself) and felt generally pleased with ourselves. Tomorrow we need a laundromat, a grocery store and above all, a petrol station.