Up and at ’em this morning, ready for our day in the big city. The KOA provided a minibus with a jovial Quebecois to drive us across the bridge into the city. He bantered with us in French and English as we got on and it struck me how strange the local French accent is. We are used to the French of Northern France which is all spoken at the front of the mouth in a way which leaves you with pursed lips if you try to do it. Here, they chew on the language with their back teeth. Its a bit like listening to someone being strangled. It sounds to me almost as if this is a second language that everyone has been forced to learn. It isn’t of course, but I can’t take my ears off it.

It was an interesting drive into Quebec, on roads lined with immaculate little houses, with manicured lawns and colourful flowerbeds.  No paint dares to flake from a windowsill here; no weed has the courage to poke through the crazy paving. Honestly they were spookily well kept. It was like a show-street for a new development.

Quebec has upper and lower sections and we stepped out near the top into baking heat, and made our way up to the Citadel which stands guard over the river. It was actually built by us Brits as protection against marauding Americans. It never saw action – perhaps because it was generally agreed to be impregnable. Not to us though. We paid twenty bucks and we were in. And what’s more we got there just as they were changing the guard, so we got to see bearskinned soldiers marching about the parade ground with the ceremonial goat looking on. When we left, so did the outgoing guard unit. They had changed into their civies and there was a column of second-hand cars each with a solitary squaddie in it heading out of the citadel,. The goat was in a trailer at the back of the line.

We walked down to the lower part of the city which had smaller buildings lining narrow streets and was clearly a big slum once upon a time. Now though it is all chi-chi and bijou and full of artists and galleries and tourists and buskers. Once free of the crowds we looked for a place for lunch and found a perfect little roadside terrace with a fantastic menu. The maitre d’ brought out some little amuse bouches of black pudding blended with chives on pieces of crispbread which I thought were delicious and Tom ate doubtfully. But really, that was a taste of things to come (which I suppose is the point in fact). Our lunches were sublime and P and I kept grinning at each other across the table. She had a sort of egg souffle with thyme, spinach and cheeses and I had a warm salad with the tenderest pork medallions in a red wine reduction. Tom wolfed down duck ravioli with bacon and bechemel sauce. That’s how to eat. Everything was fresh and beautifully presented and not too big, and as ever our waitress was attentive and chatty. We ran out of excuses to stay and eventually tore ourselves away, down to the harbour.

The St Lawrence is a big brawny river here and it was flecked with sails for as far as you could see. Powerboats roared and bumped between them and fat motor cruisers, cruised. We watched ten or so boats – mostly yachts – ride the big lock down from the harbour to the river a few feet below. What a grand city this is, and all the best ones have some kind of close relationship with water.

At one point we came across a terrific mural encapsulating much of the history of Montreal. I could describe it, but here are some pictures. Then I won’t have to. 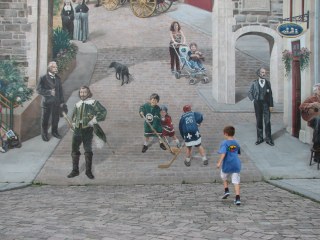 We hopped on a car ferry which takes less than ten minutes to cross over to Levis, but it was the best view of old Quebec towering over us on the hill. After climbing some steep wooden steps up to the village we stopped for a break in a playground for The Dynamo (and his mum) while I found an epicerie with ice-lollies.

Levis is a really pretty little place with more perfect houses facing cross the river to the city, and a big church on the hill behind them covered in little spires. 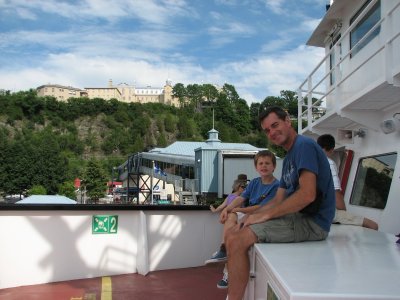 We caught the ferry back feeling a bit too hot but with a cool breeze across the water. We rode Quebec’s little funicular up the the upper part of the city. A funicular is what you get when you cross a train with an elevator I think. At the top there was a street performer doing a series of bike tricks and some nice gags with hapless members of the audience – he noticed a bald man was leaving and threw him a terrible woollen wig; “you forgot this!”.  Further along there were others of the “sprayed to look like a statue” variety and Tom was fascinated. A girl in a wonderful bronze costume beckoned him over to look in her donations box and when he did, the box squirted him. He shrieked, completely delighted.

So, back on the bus, across river for the fourth time today and Tom made the most of the evening sunshine in the little KOA swimming pool. We had supper outside just before the mosquitos came out and so to bed. What a terrific day. Back to Montreal tomorrow for another visit to the visa people and then we will wave goodbye to cities for a while.