Blueberry pancakes this morning, as they are beginning to get a bit squishy. The blueberries that is. We ate them outside smothered in maple syrup in the damp warmth of a humid morning. That’s probably enough adjectives for any self-respecting sentence, though Michael Chabon makes an art form of cramming in the description in the wonderful book I am reading at the moment: The Amazing Adventures of Kavalier & Clay. I can sense that it is about to turn sad though. Do good books always have to be sad? Discuss.

None of us felt much like doing anything today. It was too muggy and there were promises of showers later. What P and I really wanted to do was rent a canoe and take it across the lake to a trail which looked very nice. But it just wasn’t the weather for it, so we decided to cycle down to another trailhead and walk along the lakeshore. Tom had already come off his bike once this morning, leaving him with a bloody knee, and halfway to the trailhead he came off it again, grazing his elbow and leaving him very miserable “I am not getting on that bike again” he said through deep sobs. 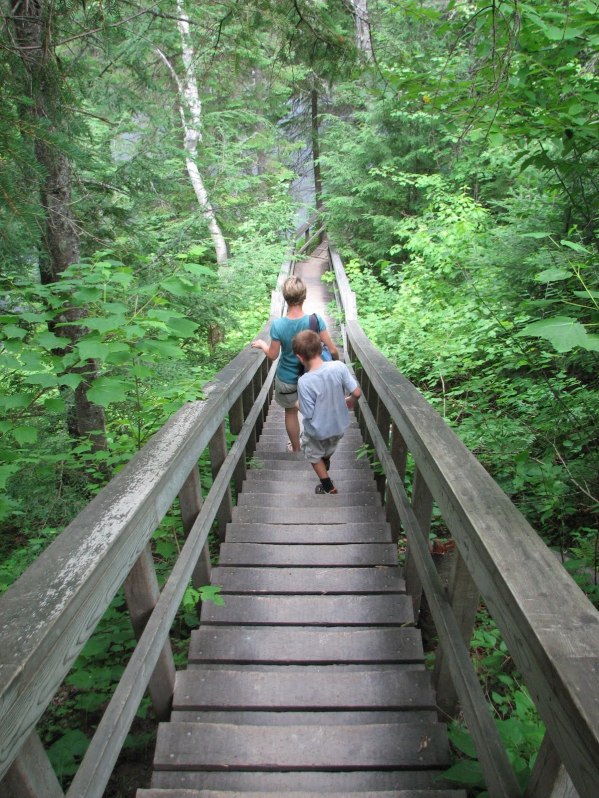 He did though and took it very s l o w l y and ten mintes later we were walking through a dense and tangled birch forest. The old growth had been cleared more than a century ago and birch had been planted in its place. To start with it was fairly unremarkable. A stony track through a tunnel of trees with occasional views of the lake. Tom filled the time by making us do a “one word” story where we take it in turns to tell a story, one word at a time. So we plodded along through the dense woodland telling an increasingly bizarre tale about a Giant on a mission to rescue, er something. Then we came to some wooden steps down to a pinched off bit of lake and it all got a bit more interesting.

We crossed a boardwalk pontoon bridge and climbed more wooden steps up the other side. We stopped for sandwiches and began to think about doing the whole 17K loop, when it started to rain. Not much at first and we were in the trees so we didn’t feel it. But then thunder started crashing around us and lightning flickered really quite close and we decided to turn around. It was a good thing we did because for the next few hours it was a wall of rain outside. We were all completely soaked but Tom seemed to get jollier the wetter we were. We pretended to be frustrated that there was no rain and as water poured down his face he kept piping up with “I can’t BELIEVE how completely dry it is, honestly if I don’t see just SOME rain today I am going to be really disappointed”. By the time we got back to our bikes I was three times my usual size due to the volume of water my skin had absorbed. T was saying he couldn’t WAIT to ride his bike again. We were pedalling slowly up the hill to the our campsite when there was the most almighty crack of thunder right next to us. You could smell the lightning and it was really scary. Around the corner there was a tree that looked like it had been struck – a big chunk of it was in the road and its trunk appeared to have been blasted with a shotgun. We beetled back to Harvey, stripped everything off and let it drip in the bathroom. Hurray for not being in a tent…

So, it turned into a movie afternoon. We all watched “Astro-boy”, ate ice-cream and two of us drank lots of tea. It was a very cosy couple of hours and when the rain stopped, I went outside and gave our grubby motorhome a sponge bath. I was almost done when I got a feeling of being watched and there was a little red fox about three feet from me. I froze and after he’d sniffed the air he trotted past me and had a good scout around our campsite. He was a wet and scrawny little thing but he wasn’t bothered by me in the least.

Supper was that old standby; baked beans, sausages, mushrooms and scrambled eggs made by Tom. If its fine tomorrow we will have another crack at the great outdoors, but failing that we will head to the KOA outside Quebec City and be urbanites for the weekend.