By Richard ListerJuly 11, 2010
It was meltingly hot today. The gizmo on my phone said there were heat and humidity warnings for the region, and it feels like we have been walking around in a furnace all day. Wearing thermals. We did however wake up in the blissful dry cool of airconditioning and oh how we appreciated it. Philippa went to the little shop and bought warm bagels which we had for breakfast outside. St Jacques le Mineur Campground is a funny little community, filled mostly with retirees it seems. The men pad about, stripped to the waist looking comfortable and the women do housey things and chat on what passes for front stoops in motorhomes. Its very quiet and has been a relaxing stay. Tom was back out to the water slide, while Philippa pottered and I finally connected the electric lumbar support system I found coiled away and unconnected under the driver’s seat. I am easily pleased.
We had until one o’clock in the site, and at twelve thirty a couple arrived looking somewhat nonplussed that we were in their space. “What are they DOING there?” Philippa overheard wifey say in French. She told them we’d be gone in half an hour and we set about packing up to go. We pulled in the awning, disconnected the water, coiled up the hose, dumped the holding tank, put away the sewer hose, and at the last minute turned off the airconditioner and unplugged from the mains. Switches, hatches, step, Tom, off.
Candiac was about half an hour away and has a Scotiabank which was the sole purpose of going there. The US Immigration Service is devoted to the sport of hurdling, in which the idea is to erect as many small hurdles as possible for those seeking to aquire a visa. One of the last of these bureaucratic bear-traps was that in order to hand in our paperwork at the US consulate tomorrow, we have to have two original copies of a receipt from a Scotiabank (and only a Scotiabank) showing that we have paid in the sum of 140 US dollars to a special State Department bank account in the US. This cannot simply be done at the consulate, or over the phone with a Visa card, or at a US bank in the US, or with a direct debit, or any of the usual ways that people transfer money quickly and easily in the twenty first century. No indeed, after all where would be the fun in that? It requires taking 140 US dollars into Canada and paying them into a specific Canadian bank and getting the paperwork to prove it. So we did. Mr Google and I had discovered a Scotiabank on the just-built outskirts of Candiac and Philippa converted Canadian dollars into American dollars, so that they could be paid into the US account at the Canadian bank, and got two stamped pieces of paper to add to our thick application file.
Then we got a bit lost. We were looking for some semblence of “downtown” Candiac but never found it. Despite the aircon, it was getting somewhat toasty in old Harvey – those big wondows have a downside – and Tom was beginning to look a bit blank and sweaty. We stopped off at a big supermarket to stock up and enjoy the cool. We really are in France you know. All kinds of interesting vegetables, wonderful meats and cheeses, a big selection of wine and beer from all over the place. I pounced on some Belgian Leffe. The fridge is now stuffed and it was time to find the campsite on the south bank of the St Lawrence in a Montreal suburb called Brossard.
This presented a slight problem. The address for the campsite (which took me three days to track down) was on a Google Doc on the internet, and since coming to Canada we have discovered that we can only access the internet on our phones if we are in a wifi spot. And we weren’t. None of the tourist guides list this little campsite, and I knew that no-one would know where it is – it was almost impossible to discover its existance in the first place.
We headed for Brossard anyway and pulled into a hotel car park. Playing the part of the dippy foreigner (it came easily to me) I pleaded with the women at the front desk to give me access to the internet. Actually I didn’t have to plead at all, they were extremely friendly and invited me to use their computer straight away. I found the address in a couple of minutes, offered merci beaucoup to the helpful ladies, and soon we were pulling into the tiny car park a couple of miles further on, which is the only campground which offers space for RV’s within twenty miles.
“Campground” is perhaps a bit of a stretch. It really is a car park, surrounding some sort of closed-up office. The key thing about it though is that the number 6 bus which stops outside will take us within four blocks of the US consulate in time for our 8am appointment tomorrow. The chap who runs the place appeared as we pulled in, then went to find a street map for us and told us where to get the bus. 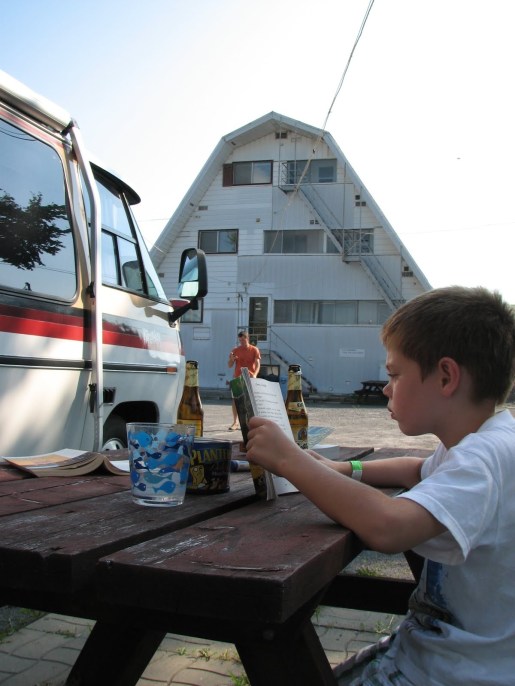 We plugged back into the power to run our big airconditioner, connected all the hoses and PT and I had a cold Leffe each while Tom stuck with gin. Well it was something clear anyway. Supper was at a place which had a sign which looked like some kind of ghastly chicken fast food place, but which turned out to be a proper restaurant, albeit with chicken in almost everything. Our waitress was easy going and friendly – a lady of about sixty who quickly switched to English when she heard me stammering about Monsieur Tremblant.
So, tomorrow we head into Montreal ready to leap those final visa hurdles, and spend the rest of the day in the city. Wish us luck.