This is more like it. Just down a wooded slope from our campsite is a small lake surrounded by forest and a sandy beach. While Tom and I sat out this evening two tiny squirrels raced around our feet and as I closed the door to the RV a moment ago I heard an owl hoot. We cannot see or hear a single other person from here. The sites around us are all empty.

Brown Tract Pond is a gem of a park and not particularly easy to get to which may explain why there are so few people here. Even the tourist info ladies in Old Forge didn’t think we could park here in an RV “Oh no. Its too small, you need to go to one of the bigger campsites.” They also directed us down what turned out to be a dirt road saying it would be a quicker route. We were lucky they did because the road turned out to be a real slice of the old Adirondacks. It was corrugated and potholed and largely unmade, weaving through dark woods with trees meeting over the middle. Spaced out either side of it were small wood-shingled cottages with outhouses. Some had been turned into weekend bolt-holes but others still seemed to be home to people living a very simple life in the hills, with a well in the garden and propane tanks stacked outside. One or two had also enclosed an old caravan in the yard with a couple of walls and a roof. 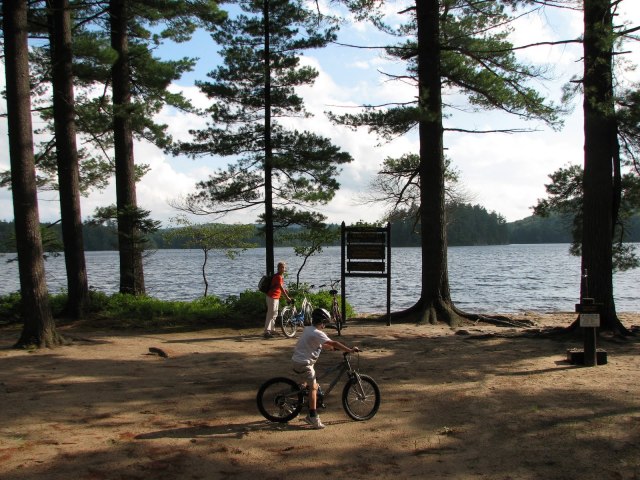 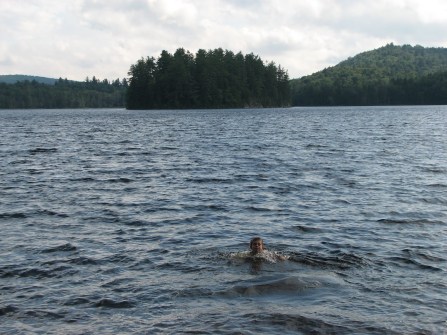 We bounced slowly along the track for several miles until we spotted what looked like campsites by the lake, which is exactly what they were. We  turned off into one, got our bikes and found the little park office half a mile down the road, hummingbirds buzzing and darting at a red feeder. The warden wanted to chat as he signed us up, telling us about the bears that had been seen around the place over the past few days. He was off to family pasta night at a restaurant in Raquette Lake. There does seem to be a big Italian influence here. We freewheeled down to the deserted beach and Tom stripped off and ran into the lake as we sat in the glow of the late afternoon sun enjoying the breeze.

It was quite different to how the day began. It rained so hard overnight that it woke us both up several times and we emerged into a grey morning with our site completely sodden. The house battery had been very low when we went to bed so I went to turn on the generator…nothing. I flicked on the vehicle batteries and they too were almost completely drained. I turned the key in the ignition and there was a solitary single whirr as the engine turned over once. After 42 hours of running the fridge freezer and the water pump and the lights and all the other electricals, we had killed it. Pondering an embarrassing trip to the ranger to ask for a jump start, I tried the ignition again and coaxed a few more desultory wurr-wurrs out of it before…it started! Phew. With the engine running I got the generator going and left it on for an hour charging everything up again. OK, note to self, if you are not plugged in at a campsite, RUN THE GENERATOR OCCASIONALLY… On the road again we passed a Walmart and I picked up a self contained jump-starter just to be sure.

It was laundry day and as we set off this morning we said to Tom that we needed to find a laundomat and a coffee shop. Straight away he said “and probably a hardware store for Dad”. Thats ma boy! 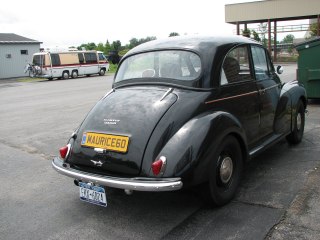 As we left Green Lakes to head northeast, we seemed to enter a more workaday world with houses built for practicality rather than style and businesses catering for locals rather than tourists. Rome NY is very much a Real Place with trucks rumbling through and a main street catering to those needing a car fixed or lumber or insurance.  It also had a laundromat called the “Soap Opera” so how could we resist. Right opposite it was the only other laundomat in town called “Pinky Whites”. Its a curious thing but you can go for miles on American roads with no sign of a store and then when you do see one, there will be another offering the same thing right opposite it. Drug stores in particular seem to have a buddy system going. So do garages.

Many quarters later we had clean clothes again and we found lunch in Eddie’s Paramount Diner; a classic aluminium-sheathed diner with round stools at a long counter and elegant sunrise designs in the stainless steel splashbacks. It had seen better days but beneath the grime was a time machine flashing back to an era when everyone wore hats and Norman Rockwell did the illustrations. Philippa found a blurb by the entrance which said it had been built in 1941 and a museum in Philadelphia had recently tried to buy it from the owner. He decided he would rather keep serving egg breakfasts, burgers and fish specials on Friday to a dwindling clientele being gradually lured away by the Burger King on the next block.

Soon we were heading north again, enjoying the swell of the hills around us. The rain came and went and we stopped in Old Forge for a caffeine break. The local newspapers were running profiles of the high school graduating class – making a real fuss of them all. Each had a photo and had been interviewed. Bright young faces with the rest of their lives opening up in front of them.

The rain clouds didn’t really clear until we hit the track which brought us here. Its perfectly quiet outside and time for bed.