Mary from across the road joined us for breakfast and it was lovely to catch up over blueberry muffins and coffee. She is, of course, already haranguing various Important People In Publishing that she knows in Boston, into find us space for the GMC. She told us that one such victim said wearily “I wish you had called to ask something about books…”.

I took my Dad into Ann Arbor after for a potter about to kill some time before going to Wallace House, the focus of my Fellowship in ’07. Everything felt exactly unchanged; students in cafes, frowning into laptops over lattes, others crossing the road as if they were indestructible.

Wallace house was just the same too though it was rather startling to see a whole bunch of different faces earnestly listening to the speaker of the day. Birgit and Charles were friendly as ever and Jill McGivering from the Beeb was there along with Nick who was visiting for a couple of weeks. It was so nice to slip back into that cosy, clubby environment and feel to be among friends. We freeloaded lunch, headed back to Brooklyn Ave to pick up the GMC, goodbye Bill and Betty, Mary and Randal, goodbye Ann Arbor. Back to the road. 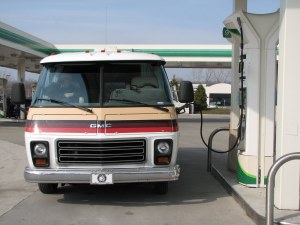 We decided to get off the freeway today. So, after a quick dash to Toledo on the Interstate we turned off onto Route 20 for a while, cutting through run-down farming communities with sagging roofs and peeling paint. The road had been widened almost up to their front gates. Route 20 is one of the old two lane highways which runs from Maine to Oregon, but there was no romance here. Stll it was better than the anonomity of the freeway which always leaves you wondering where you actually are. It was nice to trundle along at 55/60 rather than the mad rush of 70 /75 on the freeway. This old bus was made for an age when 55 was the maximum across the country and it settled into an easy quiet hum.

As we crossed into Ohio, the road instantly improved, and soon the farms became more gentile, with clipped shrubberies and smart dutch barns. Our motel’s location was a bit of a mystery as the satnave didn’t know where the road was and the and lad behind the desk couldn’t really explain how to get there – or at least I couldn’t understand the directions, but we got here. Bob Evans provided dinner which is now glued to my stomach in a rather satisfying way and at 9.41pm it feels somehow very late.